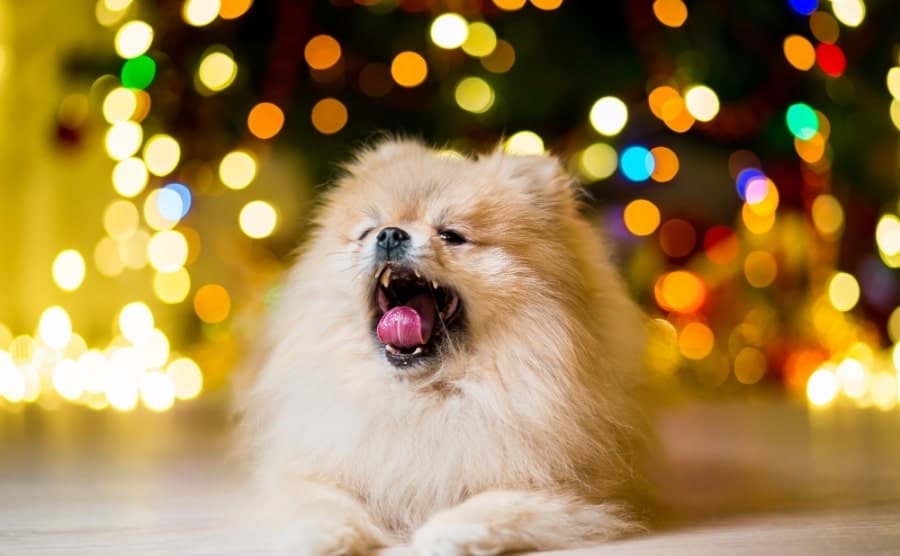 Does your Pomeranian cough after drinking water? Then you might be wondering what’s going on. While coughing from time to time might be normal for your Pom, regular coughing is something that needs attention.

Let’s see in detail what conditions can make your Pomeranian cough after drinking water and what you should do. Keep on reading.

4 Reasons Why Your Pomeranian Coughs After Drinking Water

1. Water in the Windpipe

One of the most common reasons why your dog coughs after drinking water is something going down the wrong way.

The same thing happens to people when they drink water too fast and choke on it. You must have experienced it at least once, but you might not know the mechanism behind it.

The trachea, also known as a windpipe, is a tube that runs from your Pomeranian’s larynx to the lungs (bronchi). Its main goal is to transport air in and out of the lungs when your Pomeranian breathes.

The esophagus, on the other hand, carries food to the digestive system. The esophagus and the trachea share an opening in the throat, called epiglottis.

The primary role of the epiglottis is to prevent food and water from getting into the lungs. However, sometimes it doesn’t close all the way and allows water/food to enter the windpipe. That’s called aspiration.

When that happens, the body reacts immediately to protect your Pomeranian’s lungs and engages the cough reflex. The goal is to cough the substance from the lungs.

Usually, your Pomeranian will continue to cough until the lungs are clear. However, if some water or food remains in the lungs, it might cause what’s known as aspiration pneumonia.

Food/water carries bacteria that could multiply in the lungs and inflame them. Sometimes the lungs manage to deal with the bacteria, but other times – they don’t.

If your Pomeranian tends to gulp down their food or drink too fast, you have to take measures. You might try elevated bowls to slow down their drinking or floater bowls that release only a small amount of water at a time. You could also consider using dog throat soothers to ease the pain of your Pom.

When people hear “kennel cough,” they often think that’s something only shelter animals get. That’s not true.

Canine tracheobronchitis is a highly contagious disease that spreads quickly among dogs, especially in close quarters. Hence why people know it as kennel cough. If you’re Pomeranian is coughing up white foam, it may be more serious.

The disease is airborne, which means that it spreads primarily through the air. The usual means of infections include contaminated objects and surfaces and interactions with infected animals.

When your Pomeranian inhales the bacterial or viral particles, they attack the trachea, leading to inflammation and irritation of the larynx and the windpipe.

The tell-tale sign of this dog cough is a persistent cough that sounds like a goose honk. It’s a very different sound than the normal coughing you might hear from your Pomeranian, including reverse sneezing.

Other symptoms of kennel cough include:

But why does kennel cough makes your Pomeranian cough when drinking water? Drinking puts pressure on the trachea, and when it’s already inflamed/irritates, it can lead to a dog coughing fit. The same can happen when your Pomeranian eats.

Fortunately, kennel cough isn’t that dangerous. Think about it as the canine equivalent of the common cold. Most Pomeranians recover quickly, even without treatment, but some might need antibiotics.

Since the disease is highly contagious, it’s important to separate your Pomeranian from other dogs, if you have any. You should also disinfect toys, beddings, and dishes.

What hypoplastic trachea means is that your Pomeranian has an underdeveloped trachea. Its cartilage rings and muscles aren’t properly developed to give a stable shape to the trachea, and the result is narrow airways.

Since the trachea is smaller than average, the epiglottis we talked about can’t do its function properly. Food and water get by it and go into the lungs. That’s why your dog coughs after drinking water.

This condition is more common in breeds with short muzzles, such as Pugs, English Bulldogs, and Boston Terriers.

However, teddy-bear Pomeranians have shorter snouts than standard Pomeranians and might be prone to the same issues as brachycephalic breeds. As such, you have to watch out for the following signs:

Depending on how narrow your Pomeranian’s trachea, your vet will work out a management plan. In rare cases, your Pom might need surgery.

While hypoplastic trachea is rare in Pomeranians, a collapsed one is quite common. What happens is that your Pom’s cartilage rings and connective tissues lose strength over time. As a result, the trachea can’t hold its shape and gets narrow and flat.

Since your Pom’s trachea is misshapen, the epiglottis can’t cover the opening to the esophagus well and leaves small openings. Water is more likely to get through these than food. That’s why your Pomeranian might cough after drinking water, but not when eating.

A collapsed trachea tends to affect Pomeranians in their middle age or senior age. It’s a progressive condition that can get worse if left untreated. Thankfully, there are some safe natural remedies that dog owners can take advantage of.

The hallmark sign is a persistent, honking cough, very similar to kennel cough. But kennel cough tends to resolve in a few weeks, while a collapsed trachea requires medical intervention.

Besides coughing, other signs of a collapsed trachea in Pomeranians include

While it sounds scary, a collapsed trachea is a manageable chronic condition.  However, it can lead to respiratory distress if the windpipe gets too narrow. That’s why it’s important to diagnose it on time.

Usually, your vet will prescribe cough suppressants, steroids to lessen the inflammation, and bronchodilators to open the airways. In severe cases, cough suppressants and the like may not be enough. Your Pomeranian might need surgery to restore the trachea’s shape and lessen your Pom’s breathing difficulties and coughing.

Can You Prevent a Tracheal Collapse in Pomeranians?

After reading all of this, you might be wondering if you can do anything to prevent a tracheal collapse.

Unfortunately, scientists don’t know why some dogs develop this disease. They suppose that it has to do with a congenital abnormality in the cartilage rings, which makes them weaker than normal.

So, there isn’t much you can do to prevent this condition. But here are four tips to help your Pomeranian if they have a collapsed trachea.

Collars put a lot of pressure on the windpipe and can damage or weaken it if your Pomeranian pulls on the leash a lot. As such, most specialists recommend that you don’t use neck collars on breeds prone to a tracheal collapse.

Instead, you can use chest harnesses to minimize the stress on your dog’s throat.

Pomeranians are small dogs that should weigh between 3-7 pounds. If they’re overweight, it increases their chances of getting a tracheal collapse. Obese Pomeranians also tend to breathe with more difficulty than slim ones.

As such, you should keep an eye on your Pomeranian’s weight and consult your vet if they appear overweight.

When your Pomeranian has a tracheal collapse, they might not be able to pant as effectively when they’re hot. The same goes for when they’re overtired and exhausted.

An effective way to decrease the uncomfortableness of a Pomeranian’s tracheal collapse is through the use of dog throat soothers. While sometimes referred to as cough medicine for dogs, these products can do wonders to increase comfort so your Pomeranian is back to their normal self. These are definitely an excellent treatment to your dog’s throat health.

When you see your Pomeranian coughing after drinking water, you should observe them for a couple of days. If the coughing persists, you should talk to your vet as soon as possible.