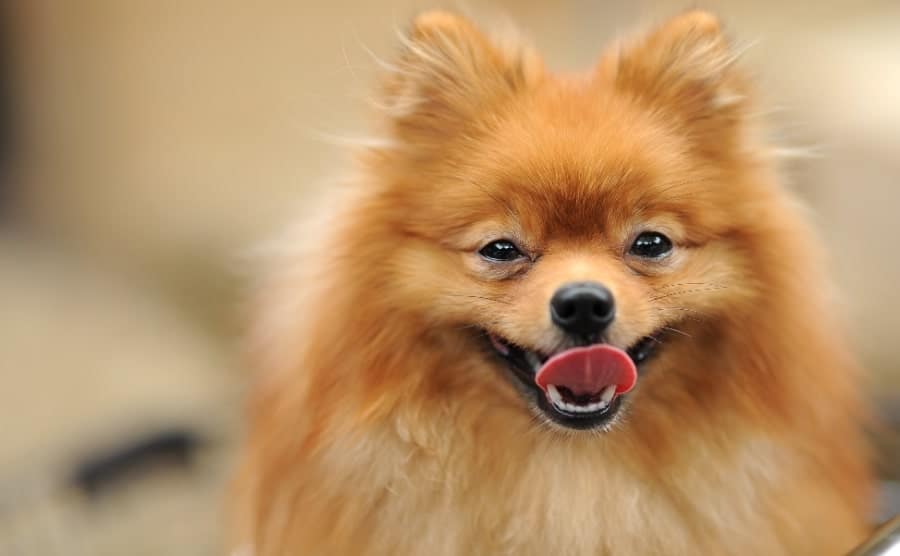 So, what diseases can make your Pomeranian cough up or vomit white foam? Just keep on reading to find the answers.

5 Reasons Why Your Pomeranian Coughs Up White Foam

One of the most likely reasons why your Pomeranian is coughing up white foam is kennel cough.

Don’t let the name mislead you. It doesn’t have anything to do with kennels, and your dog can get infected without ever stepping into a kennel or a shelter.

Kennel cough is a highly contagious respiratory disease caused by bacteria and viruses. When your Pomeranian inhale the bacterium or the virus particles, they attack the respiratory tract and cause inflammation of the windpipe and the larynx.

The usual symptoms are a persistent cough that sounds like a goose honk, sneezing, runny nose, gagging, and coughing up foam. Some Pomeranians might also have eye discharge and loss of appetite.

Since the disease is airborne, your Pomeranian can catch it if they’re in contact with infected dogs or infected surfaces. It tends to spread quickly in kennels or places where many dogs gather, such as the dog park. That’s why they call it kennel cough.

The good news is that kennel cough is highly treatable and that it’s not very dangerous. In mild cases, your Pomeranian might need no treatment. However, young Pomeranian puppies and Pomeranians with a weak immune system should be observed by a vet.

While there’s a vaccine against kennel cough, it’s not a 100% guarantee that your Pomeranian won’t get sick. That’s because a lot of different bacteria and viruses can cause the disease. Still, you should speak to your vet about possible vaccination.

When you hear the word “bloat,” you probably don’t think about it as a serious medical condition. However, it can be quite dangerous in dogs, and without quick medical intervention, your Pomeranian might not make it.

Gastric dilatation-volvulus or bloat occurs when your Pomeranian’s stomach is so full of air that the pressure stops the blood from reaching the heart. The stomach gets hard and swollen, and in some cases, it might rotate.

If the stomach flip, it can cut off the blood supply to the pancreas and the spleen. What’s scary about that is that the pancreas starts producing toxic hormones due to the lack of oxygen. These hormones can stop your Pomeranian’s heart.

The good news, if there are any, is that large breeds are more likely to develop bloat than toy ones like Pomeranians. However, if your Pomeranian is spitting white foam and has an enlarged stomach, get them to the vet.

Another reason why your Pomeranian might be coughing up white foam is heart disease. It sounds scary, but it’s a manageable condition if you take measures on time.

Heart disease affects the way the heart pumps up blood and decreases its efficiency. As a result, fluid might build up in your Pomeranian’s chest or abdomen. Heart disease might also lead to an enlarged heart, which presses on the airways and makes breathing difficult.

Usually, persistent coughing, sometimes accompanied by gaging, lack of energy, and shortness of breath, are the most common symptoms.

While age is the most common factor for developing heart diseases, the breed also matters. Unfortunately, small dogs, such as Pomeranians, are prone to chronic valvular disease.

Besides inherent conditions, infection with heartworms might also lead to heart problems. These worms live in the heart and lungs and can cause severe damage to these organs and their associated blood vessels.

As such, you have to make sure that you deworm your Pomeranian regularly for heartworms.

Besides viruses and bacteria, fungus organisms can also cause infections. Some Pomeranians like to dig in the yard, and they might inhale fungal particles if the soil has been contaminated. The usual symptoms are coughing and white foam discharge.

Some dogs like to eat excrements, and if your Pomeranian is one of them, they can get a fungal infection. The same can happen when they snuff the ground and come across a bird, poultry, or bat feces.

One common fungal infection, typical for the Southwest, is Valley fever. When your Pomeranian inhales the spores of the fungus, they travel to the lungs. If the immune system can’t get rid of the spores, your Pomeranian develops a cough and fever.

Rabies might be rare in the USA, but it’s something you should consider if your Pomeranian has had an encounter with a wild animal and doesn’t have a vaccine.

In rabid animals, the nerve damage prevents your dog from swallowing. As a result, they start to foam at the mouth and might get aggressive and bite without warning.

There’s no cure for rabies once the symptoms appear. However, your dog can infect other animals and people through bites or scratches. As such, you should contact your vet as soon as possible.

Coughing up white foam is different from vomiting foam. When your Pomeranian coughs foam, it probably comes from their lungs. Vomiting, on the other hand, usually indicates that the foam comes from the stomach.

However, you can’t always say if your Pomeranian is vomiting or coughing white foam. Sometimes you just find “the evidence” on the floor. So, let’s see three common reasons why Pomeranians vomit white foam.

In most cases, Pomeranian vomits white foam because of indigestion. Your Pom probably has eaten something that has upset their stomach, and their system is trying to get rid of it by vomiting it.

It might be new dry food, or your Pomeranian might have gone treasure hunting through the garbage. But it might also be something poisonous or a foreign object.

So, if you think that your Pomeranian has swollen something they shouldn’t have, go to your vet as soon as possible.

Think about bilious vomiting syndrome as similar to acid reflux. Bile and acids are necessary for the proper digestion of food, but the digestive system sometimes produces more than it needs. That could irritate the digestive system of a sensitive dog such as Pomeranians.

Moreover, when your Pomeranian’s stomach is empty, it’s easy for bile and acid to irritate it. That leads to vomiting of yellow, white, or green liquid.

Feeding your Pomeranian small meal throughout the day and a snack before bedtime might help stop the vomiting. Otherwise, your Pomeranian will need medicine to reduce the production of acid and bile.

The pancreas is vital for the proper digestion of food because it produces enzymes that break down fats, sugar, and starches. These enzymes get active when they reach the intestines.

However, if your Pomeranian develops pancreatitis, the enzymes activate upon release, which inflames and damages the pancreas. Repeated vomiting is a common sign, along with a hunched back.