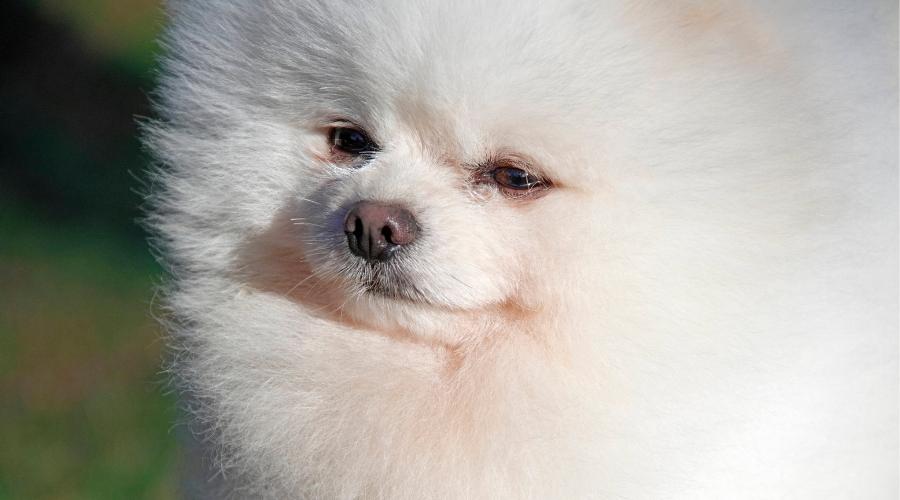 Pomeranians are known to make all sorts of noises, from barks and growls to yips and howls. But one sound that’s particularly perplexing to many Pomeranian parents is the choking noise. Have you ever wondered why your Pom sounds like choking while coughing, sneezing, or gagging?

Mostly, a Pomeranian sounds like choking because of some sort of obstruction in the throat or windpipe. This could be caused by something as simple as an inhaled foreign object, such as a seed or a blade of grass, or something more serious, like tracheal collapse or laryngeal paralysis.

In this article, we’ll cover all the important causes of abnormal choking sound production in Pomeranians and their symptoms, treatment, and home remedies to counter this issue.

Pomeranian choking noise is a relatively common issue. It may be due to the dog’s anatomy, such as a narrow trachea, throat, and voice box. The narrowed passageway results in Pomeranian breathing noises.

Let’s have a look at the major causes of choking sounds.

Pomeranians have small and fragile windpipes and are particularly prone to a condition called collapsing trachea. In this disorder, the cartilage that keeps the trachea open becomes weakened and collapses.

It can cause your Pomeranian to have difficulty breathing and make them sound like choking. It can be caused by genetics, injury, or chronic coughing.

Symptoms of tracheal collapse include:

Treatment for a collapsing trachea will vary depending on the severity of your dog’s condition. Your vet may recommend the following:

In Pomeranians, mostly Bordetella bronchiseptica cause kennel cough, a bacteria in the environment that can cause an infection. The disease is highly contagious and is often passed from dog to dog in close quarters, such as at a kennel or boarding facility.

Most dog breeds with kennel cough will recover on their own within a few weeks, but some may require antibiotics to clear the infection. In severe cases, hospitalization may be necessary.

Pneumonia is another respiratory disease that can cause a dog to sound like it is choking when it breathes. It is a lung infection caused by viruses, bacteria, parasites, or fungi. It can also be caused by inhaling foreign objects, such as vomit, chemicals, or smoke.

Symptoms of pneumonia include:

Mild cases of pneumonia are treated with antibiotics, but severe cases may require hospitalization and intensive care.

Laryngeal paralysis is a condition that occurs when the muscles that open and close the larynx (voice box) are paralyzed, causing choking sound production in dogs. It may be due to nerve damage, tumors, or trauma to the neck.

Symptoms of laryngeal paralysis include:

Laryngeal paralysis is a severe condition that may require surgical treatment to correct.

Pomeranians are small, active dogs known for making a peculiar choking sound when they get excited or forcefully inhale through their nose (reverse sneezing). Reverse sneezes happen when the soft palate inside the Pomeranian’s throat vibrates. It can also be caused by canine nasal mites or Pneumonyssoides caninum.

The most common symptom is a rapid, deep snorting noise (sounds like they are choking or gasping for air). Other symptoms of Pomeranian reverse sneezing episodes include:

Heart disease is another possible cause of a Pomeranian’s choking sound. Dogs with heart disease often have difficulty breathing and may make a rattle or wheeze when they breathe. Heart disease can be due to congenital defects, infection, or other problems.

If your Pomeranian is coughing with a choking sound, has a rapid heartbeat, or is having difficulty breathing, these may be signs of heart disease. Other symptoms include:

Your veterinarian can prescribe the best course of treatment for your dog based on his case.

Pomeranians can have trouble breathing due to their shortened muzzle which makes them more prone to allergies, causing coughing & choking sounds when breathing. Food, air bore pollutants, and irritants like cigarette smoke cause allergies leading to bronchitis.

Bronchitis causes inflammation in the bronchial tubes, leading to a buildup of mucus & difficulty breathing.

To eradicate the root cause of the allergic reaction and coughing, your vet may recommend you to:

Pomeranian hairball Issues cause coughing and gagging. The Pomeranian’s double coat protects against cold weather and predators. That’s why it’s not surprising that many Pomeranians develop hairballs.

When your dog ingests too much hair while feeding from its mother, it can form a clump in its stomach. It can cause them to gag or cough as they try to expel the hairball and can obstruct their intestine.

Pomeranians with hairball issue gag with a choking sound, and other symptoms include:

Most vets recommend Pomeranian owners to:

What Are Some Home Remedies To Ease Pomeranian Coughing Issues?

Pomeranian parents can assist their pets in feeling more comfortable by using some home remedies, including:

Steps To Relieve Choking in Pomeranian

You must take the following action quickly if you are assured that your Pomeranian is choking.

Restrain your Dog: The first step is to keep your dog calm and prevent it from swallowing anything else that could obstruct its airway.

Open the Dog’s Mouth: Open your dog’s mouth with your fingers & look for anything blocking its throat.

Remove the Obstruction: If you see something blocking the throat, try to remove it with your fingers or a pair of tweezers.

Heimlich Maneuver: If your dog is still choking and you cannot remove the obstruction, you will need to perform the Heimlich maneuver.

Cardiopulmonary Resuscitation (CPR): If your dog is not breathing, you will need to perform CPR.

Choking sounds can be classified as high-pitched, whistling, or squeaking noises. Subsequently, these choking Sounds usually lead to light or heavy coughing fits, and then gagging may occur next.

How Can I Treat My Pomeranian’s Collapsed Trachea at Home?

If your Pomeranian has a collapsed trachea, feed him glucosamine and chondroitin-rich foods. These nutrients are found in many joint supplements and strengthen and repair the cartilage in the trachea.

Can a Pomeranian Suffocate From Collapsed Trachea?

Yes, as the trachea flattens and collapses, it narrows the passageway for air. It makes breathing harder for your Pomeranian and can eventually lead to suffocation. There are four stages of the collapsed trachea, from mild to severe.

Pomeranians are predisposed to a number of respiratory issues, the most common being a collapsed trachea. If your Pom is making a choking noise, it’s essential to take them to the vet as soon as possible for diagnosis and treatment.

There are several potential causes of choking, some of which are more serious than others. Only a professional can properly diagnose and treat the problem. In the meantime, you can try some home remedies to ease their coughing.