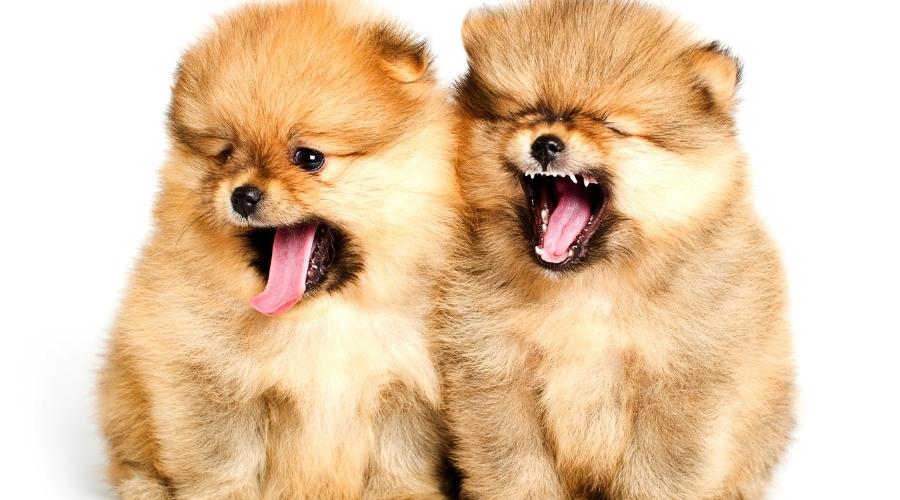 The noises are usually the result of air passing through abnormally narrowed passageways, meeting resistance to airflow because of partial blockage of these regions. The origin may be the back of the throat (nasopharynx), the throat (pharynx), the voice box (larynx), or the windpipe (trachea).

In this article, we’ll go over some of the more common Pomeranian breathing noises and what they might mean.

6 Most Common Pomeranian Breathing Noises and What They Mean

It’s actually pretty common in short-nosed, flat-faced (brachycephalic) dog breeds like the Pomeranian to make all sorts of strange noises, from stertor to stridor. Let’s take a look at some of the more common breathing noises, that may affect your dog’s breathing rate, that you might hear from your Pomeranian.

Stertor is a low-pitched sound that is associated with respiratory problems and occurs when flaccid tissue vibrates throughout the respiratory cycle. This can be a common problem in brachycephalic patients, who have reduced soft tissue structures that are not proportional to their skulls.

This can create resistance to airflow and make it difficult for them to breathe. There are a number of other structural abnormalities that can contribute to brachycephalic airway syndrome, so it is important to seek medical attention if you suspect that your pet is affected.

Some common causes that your pet is having stertor include:

Stridor is a high-pitched, harsh sound that can be indicative of an obstruction in the upper airway. It is most commonly caused by laryngeal paralysis, which is a condition that results in the loss of function of the muscles that control the opening and closing of the larynx. This can lead to difficulty breathing and a tendency to make honking or raspy sounds when inhaling.

There are a number of potential causes of stridor, including:

Both of these conditions can be life-threatening, so it is important to seek medical attention if your pet is exhibiting any signs of respiratory distress.

Wheezing is a whistling noise that is created when something blocks the normal flow of air in and out of the airway. The blockage can occur in either the trachea (windpipe) or large bronchi. Pomeranians are prone to this problem since they have small airways, which is why I always suggest Pom parents get a no-pull dog harness when going out for walks.

Wheezing is a common symptom of respiratory problems such as bronchitis, asthma, allergies, and heart diseases such as congestive heart failure and mitral valve disease in dogs. If your pet is wheezing, it is important to perform medical tests so that the underlying cause can be diagnosed and treated.

Reverse sneezing is a condition that’s unique to Pomeranians (and other toy breeds). It happens when your dog suddenly starts making rapid, deep inhalations through the nose. This can last for a few seconds to a minute and may happen several times in a row.

Reverse sneezing is caused by an irritation in the throat or soft palate (the fleshy back part of the roof of the mouth). The most common irritants are:

Reverse sneezing is harmless and doesn’t require any treatment. However, if your dog is reverse sneezing frequently or if it’s accompanied by other symptoms, such as coughing, gagging, or difficulty breathing, then you should take him to the vet.

Gagging is a reflex that happens when your dog’s throat is stimulated and it may sound like your Pomeranian is choking. It’s similar to reverse sneezing, but instead of rapid breathing, your dog will make retching or gagging noises.

Pomeranians may gag for a variety of reasons, some of which are normal, such as when they are trying to dislodge a foreign object from their throat. However, there are also other causes of gagging that can be cause for concern.

Gagging can be caused by many things, including:

Pomeranians are little dogs, and sometimes when they sleep, their snoring can sound a bit louder than usual. This is because their nasal passages are narrower than larger dog breeds. If your Pomeranian is snoring loudly, it’s probably nothing to worry about. But if the snoring is accompanied by other symptoms (like restlessness or difficulty breathing), then it could be a sign of a more serious problem.

While snoring itself is not necessarily harmful, it can be a sign of an underlying health condition, such as:

Symptoms of Noisy Breathing in Dogs

Noisy breathing in dogs can be a sign of many different respiratory problems. If your dog is making any type of noise when they breathe, like wheezing, snoring, or choking, it’s important to pay attention to other symptoms it may be exhibiting. Some common symptoms that may accompany noisy breathing include:

Diagnosis of Noisy Breathing in Dogs

In order to diagnose the cause of your dog’s noisy breathing, your veterinarian will start by taking a complete history and performing a physical examination. They will also likely recommend some diagnostic tests, such as:

These tests will help your veterinarian to rule out some of the more common causes of noisy breathing in dogs and narrow down the list of possible culprits. One common way for us pet owners to pinpoint any issue is by determining whether our dogs have a healthy breathing rate.

How to Treat Noisy Breathing Problems in Dogs

If your dog is having abnormal breathing, it’s important to seek veterinary care as soon as possible. In some cases, such as when a foreign body is present, treatment may be fairly straightforward. However, other problems (like obesity) may require long-term management.

Your veterinarian will likely recommend one or more of the following treatment options:

Surgery: If your dog has a structural problem that is causing its noisy breathing, surgery may be necessary in severe cases. This could involve correcting a deviated septum, removing polyps or tumors, or enlarging the nostrils.

Weight loss: If your dog is obese, weight loss will be essential to improve their breathing. Your veterinarian can help you develop a weight loss plan that is safe and effective for your dog.

Medical management: If your dog has an underlying condition that is causing its noisy breathing (such as hypothyroidism), medical treatment may be necessary. This could involve taking medication or making dietary changes.

Home care: In some cases, you may be able to manage your dog’s noisy breathing at home. This could involve using a humidifier to moisten the air or elevating your dog’s bed so they are sleeping in a more upright position.

No matter what treatment is recommended, it’s important to follow your veterinarian’s instructions and keep up with all recommended appointments. With the right care and early detection, most dogs with noisy breathing can live happy, healthy lives.

If you think your dog is wheezing, take a close listen. Is the noise coming from their nose or mouth? If it’s coming from their nose, it might just be reverse sneezing. This is pretty common in small dog breeds than other dogs, and doesn’t require any treatment other than patience and understanding!

If the noise is coming from your dog’s mouth, however, it’s more likely that they are truly wheezing. This is caused by an obstruction in the airway and can be a sign of a serious problem.

A dog’s wheezing sounds like a high-pitched, rattling noise that occurs when your dog exhales. Many times, a wheezing dog will also have trouble taking deep breaths and its chest may heave as they struggle to get air.

Is It Normal for Pomeranians to Wheeze?

Pomeranians are a small breed of dog, and as such, they can be prone to respiratory problems. If your Pomeranian is wheezing, it could be a sign of an underlying health condition and you should take them to the vet for a check-up.

One common cause of wheezing in Pomeranians is allergies. If your dog is allergic to something in its environment, it may start wheezing as a way of trying to clear its airways. Pomeranians can also develop a condition called tracheal collapse, which causes the cartilage in their windpipe to weaken and collapse inward (collapsed trachea). This can cause difficulty breathing and a wheezing sound when your dog breathes.

A good way to avoid any discomfort in your Pomeranian’s airways is to use a no-pull dog harness when going for walks. It’s a much safer alternative to your standard dog collar.

If your Pomeranian is making any strange breathing noises, it’s always best to take them to the vet for a check-up. This way, you can get to the bottom of what’s causing the problem and make sure your dog stays healthy and comfortable.

Pomeranians are such unique and wonderful creatures—but their strange noises can sometimes be worrisome for Pomeranian owners! Next time your Pom starts making one of the above noises while breathing, don’t panic. Instead, take a deep breath and think about what could be causing it.

If the noise is accompanied by other symptoms or if you’re just not sure, give your veterinarian a call. With the right care, Pomeranians can live long, healthy lives.