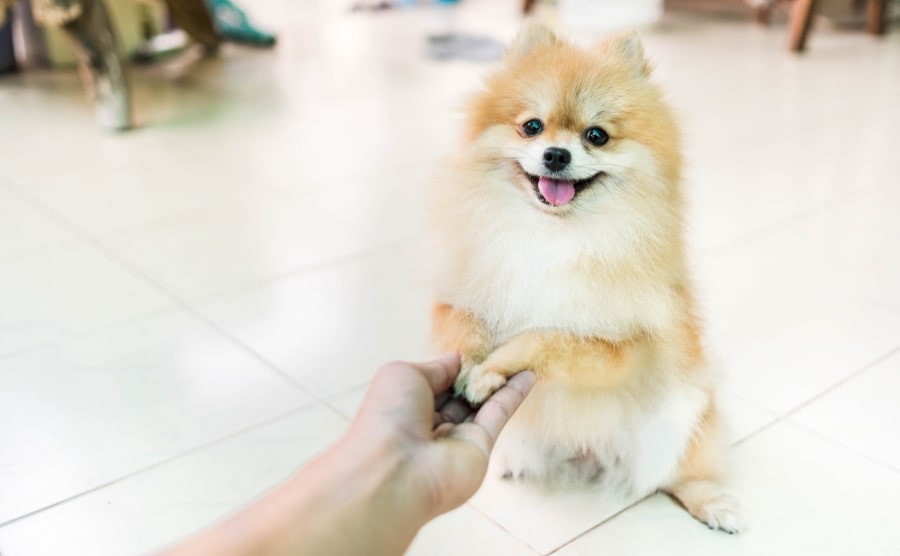 So, why are Pomeranian so smart? While it’s difficult to estimate canine intelligence, Pomeranians don’t need many repetitions to understand a command when they’re focused and paying attention. They’re also capable of solving problems and do a marvelous job at the show ring.

How to Tell How Smart Your Pomeranian Is

Canine intelligence is a fascinating subject, but also a controversial one. While scientists have been researching how intelligent dogs are, it’s impossible to estimate accurately how smart your Pomeranians are.

That’s because intelligence has different aspects. For example, your Pomeranian doesn’t need to solve mathematical problems to be considered intelligent. You’ll probably think your Pom smart if they can open doors or bring you your slippers.

So, here are five factors relevant to a dog that show why your Pomeranian is so smart. Let’s see them.

1. How Many Words They Understand

Most of what you say sounds like gibberish to your Pomeranian. However, if you say the word “dinner” or “food,” your Pom will probably perk up immediately. But these aren’t the only words that your Pomeranian recognizes.

As it turns out, Pomeranians can understand about 160 words on average. That’s the equivalent of a human toddler. So, they know a lot more than basic commands and probably more than they let us believe.

2. How Good Is Their Memory

A lot of people think that dogs have a short memory and will forget about you if they don’t see you for a while. That’s not true.

Pomeranians can see an object or a person and remember them a couple of weeks later if they’ve made an impression, either bad or good.

Remember all the stories about lost dogs reunited with their owners. That shows us that dogs can form long term memories and access them.

3. How Aware and Perceptive Your Pomeranian Is

Awareness is when your Pomeranian understands their surroundings. For example, if your Pomeranian gets excited when you grab the leash, they’re aware that you’re going for a walk.

While perception is similar to awareness, it shows how your Pomeranian uses all of their senses to make sense of the world.

For example, when your Pomeranian explores an unfamiliar object, they’re going to use smell, vision, hearing, touch, and taste to check what that object is and if it’s good for eating.

4. How Social Cognitive Is Your Pomeranian

Social cognition is your Pomeranian’s ability to interpret your body cues.

Usually, Pomeranians learn a lot about their owners when they observe how you move, act, and speak. That’s how your Pomeranian figures out what you want from them and comes running when they feel that you’re upset or anxious.

5. How Good Is Your Pomeranian in Solving Puzzles

You probably have some food puzzles for your Pomeranian to keep them busy when they’re bored. Well, your Pom’s ability to solve these puzzles and figure out how to get to the treats shows that your Pomeranian has great problem-solving abilities.

How Do Pomeranians Rank Among Other Breeds?

You start to understand why Pomeranians are so smart, but you might be wondering how they rank among the other breeds. Well, that’s an interesting question with a long answer.

Stanley Coren is one of the leading researchers on dog’s intelligence. In his book The Intelligence of Dogs (link to read reviews on Amazon) he ranked more than 100 breeds based on three types of intelligence: instinctive, adaptive, and working, which form a dog’s problem-solving abilities, memory, observation, obedience, and training.

From these three types of intelligence, the working one has the biggest impact because it shows a dog’s ability to learn from humans.

So, according to Stanley Coren’s book, Pomeranians rank 23rd and fall in the “excellent working dogs” group. These dogs understand new commands in 5 to 15 repetitions. In other words, your Pomeranian can learn a new trick after only a handful of lessons. That’s amazing.

Dogs who fall in the “bright” group (less than five repetitions) are Collies, Poodles, German Shepherds, and Labradors, while Afghan Hounds, Basenji, and Bulldogs are at the bottom. They needed at least 80 to 100 repetitions before they answered a command.

However, Stanley’s Coren book isn’t perfect. For once, it doesn’t take into account the emotional intelligence of dogs or their independent spirit.

It’s not surprising that Afghan Hounds and Basenjis are last when it comes to working intelligence.

These breeds were created to work with little human supervision and are hard to train because they’re used to making decisions on their own. Overcoming their natural stubbornness is what requires so many repetitions.

Pomeranians, on the other hand, are companion dogs and thrive when they’re around humans.

They have great observation skills and eagerness to please, which makes it easy for humans to train them. Get your Pomeranian focused and motivated, and they’ll gladly learn tricks and commands.

In addition to this, Stanley Coren never interacted with the dogs in the experiment. Instead, he formed the list based on observations made by American Kennel Club’s judges in the show ring.

So, while Pomeranians are smart and bright, it’s hard to compare them to other breeds because they were created to do different jobs. Can you compare a working dog such as Border Collie to the tiny companion Pomeranian? No, because both are smart but in different ways.

Can You Make Your Pomeranian Smarter?

Pomeranians might be highly intelligent, but they need your help to develop their full potential. Think about them as young students who are eager to learn about the world.

So, here are 5 tips on how to develop your Pomeranian’s brain.

1. Let Your Pomeranian Use Their Senses

You can do that by taking them to the dog park and letting them explore. Having to work out what something is by smell, sound, or touch is an excellent way to get the gears inside your Pom’s brain working.

As I already mentioned, your Pomeranian is capable of learning much more than a couple of basic commands. Remember that they have the capacity of a toddler, and toddlers understand a lot of what they’re parents are saying.

So, take three objects and repeat their names over and over again. Then ask your Pomeranian to grab one. If they do it correctly, you should praise and reward them. Practice a lot, and you might be able to beat the world record. For reference, it belongs to the Collie Chaser knows more than 1000 words.

While it can be fun to toss a ball to your Pomeranian, you can also try some interactive toys to stimulate their mind. These puzzle games test your Pomeranian problem-solving abilities and encourage them to try and figure out how to get to the treat. Start from a beginner level and let your Pomeranian work their way to more complicated and challenging puzzles.

In addition to this, you can always play with three cups and a treat and see if your Pomeranian can find where the food is.

Why Pomeranians are so smart is easy to understand. They’re almost as intelligent as a small child and excel at reading your verbal and non-verbal cues. Pomeranians are also very sensitive and will always come to comfort you when you’re anxious, upset, or worried.