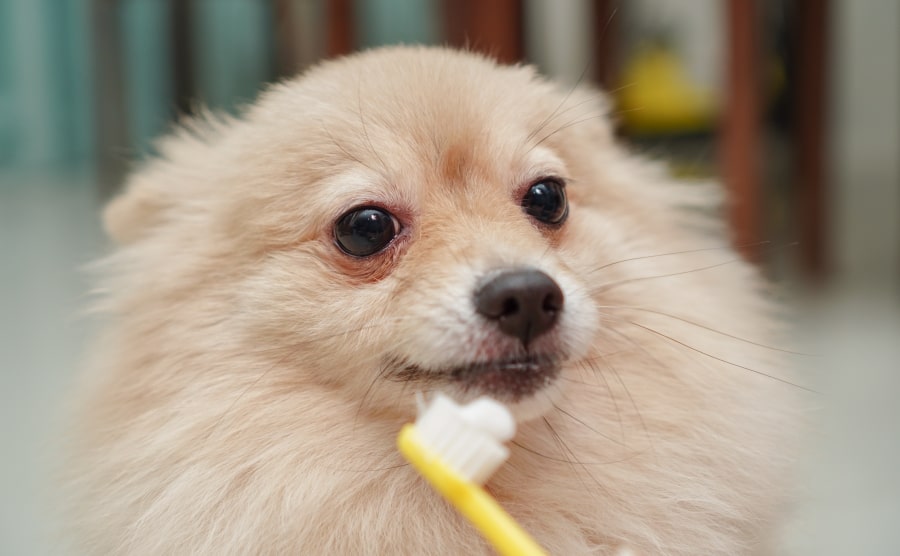 Pomeranians are one of the best companion dogs you can find, and they often amaze with their intellect and big personality. A Pomeranian in the show ring is quite an amazing sight, and you can’t help but be impressed by their gait, magnificent coat, and agility.

Unfortunately, a lot of Pomeranians never set paws on the show ring because of teeth issues. That’s not surprising because many small dog breeds are prone to various dental problems.

So, what are the most common Pomeranian teeth issues? Keep on reading to find out.

You’d think that a Pomeranian puppy is too young to have any teeth problems. However, you’d be wrong and your mistake that can lead to a lot of future dental problems.

Pomeranian puppies have deciduous teeth, also known as puppy or milk teeth. These teeth aren’t permanent, and they should fall when your Pom starts teething.

However, sometimes something goes wrong with the teething process, and the adult tooth erupts before the puppy one has fallen. As such, your Pomeranian puppy has two sets of teeth instead of one. That’s what specialists called retained puppy teeth.

The retained tooth should be removed as soon as possible to make room for the adult tooth. Otherwise, the permanent tooth will grow improperly. Often Pomeranian puppies retained their canines and incisors. However, rarely the same thing can happen to a molar.

Look at the tiny mouth of your Pomeranian puppy. Can you believe that it has to hold 42 adult teeth?

You’d be right to worry about how so many teeth are going to fit inside such a tiny mouth. That’s why Pomeranians often have overcrowding teeth, especially when you don’t deal with retained teeth on time.

The bad thing about overcrowding teeth is that they make it easy for plaque to accumulate on the surface of the teeth and food to get trapped inside the mouth.

Moreover, since Pomeranians often breathe through the mouth, there isn’t enough saliva to cleanse the mouth. So, teeth overcrowding is one of the reasons why Pomeranians often suffer from gum inflammation and periodontal disease.

Plaque and tartar lead to a build-up of bacteria in your Pomeranian’s mouth. The bacteria cause inflammation when they enter the small pockets between the gum and teeth.

That’s the beginning of what’s known as gingivitis. It’s one of the most common teeth issues in Pomeranians because Pomeranians are prone to plaque accumulation.

Usually, gingivitis presents as red and swollen gums, and there might be some mild bleeding.

Removing all the plaque and tartar is the first step in treating gingivitis. Vets usually do it under anesthesia because tartar is difficult to get rid of otherwise.

Once plaque turns into tartar, tartar builds under the gums. As a result, the gums pull away from the teeth and form pockets, which collect bacteria.

The bacteria continue to destroy the bone structure of the teeth. Eventually, periodontal disease leads to tooth loss and fragile jawbones. A simple fall might be all that it takes to shatter the weakened jaw.

While it’s easy to treat periodontal disease in its early stages, once there is significant bone loss, treatment is complicated. Usually, it involves surgery and removal of dead teeth and gum along with antibiotics to deal with the infection.

More importantly, periodontal disease doesn’t have any obvious signs before it has progressed to a stage where medical intervention is needed. That’s why you have to check your Pomeranian’s teeth regularly and have a professional dental cleaning when necessary.

While gingivitis is an inflammation of the gums, stomatitis is a more serious inflammation. It affects the whole mouth, including the mucous membranes (tongue, roof, and floor of the mouth), and leads to painful lesions and swelling that make it hard to eat.

Usually, stomatitis is the result of another disease, for example, allergies, infections, or a reaction to medications.

You should get it treated as soon as possible because the infection can spread to the bloodstream. If that happens, it will damage major organs and make treatment twice as hard.

Moreover, the primary condition causing the stomatitis might be diabetes, renal disease, or hormonal problems. So, you have to get your Pomeranian examined if you noticed any difficulties eating or sores inside the mouth.

Tooth decay isn’t as common tooth problem in dogs as it is in humans. That’s because the cone shape of the teeth offers dogs a measure of protection.

However, since Pomeranians are prone to mouth issues, tooth decay isn’t that rare in this tiny dog. Moreover, cavities are likely to form where teeth are too close together. And as you remember, Pomeranians often suffer from teeth overcrowding.

You can’t restore enamel, and once it’s gone, the tooth is vulnerable to decay.

Another common Pomeranian teeth issue is broken teeth. Since Pomeranians are prone to dental issues, their teeth wear down without proper oral care.

So, when your Pomeranian chews on things they aren’t supposed to, for example, bones and hard chewing toys, they might chip their tooth’s enamel. Usually, Pomeranians break their canine teeth, so you should keep an eye on them.

In addition to this, Pomeranians are tiny dogs, and they can get easily hurt when leaping on and off furniture. One of the possible injuries is a broken tooth.

Tooth loss is probably the most common Pomeranian teeth issue. Since Pomeranians are prone to dental disease and plaque build-up, a lot of Pomeranians lose a tooth before they’re three years old.

Often, owners ignore the symptoms of periodontal disease and take their Pom to the vet when the only option is to remove the damaged tooth to save the rest. That’s why you have to pay attention to your Pomeranian’s mouth and take them to the vet for regular teeth examination and cleaning.

A loose tooth isn’t always a reason to worry. That’s because your Pomeranian’s teeth fall out when they’re teething. However, once your Pom has got their adult set of teeth, a loose tooth is a serious issue.

Last but not least in our list of the most common Pomeranian teeth issues is bad breath.

Ask several Pomeranian owners, and you might hear them complain about how bad their Pom’s mouth smells. Unfortunately, owners often think that it’s normal for their Pomeranian’s breath to smell like garbage.

Usually, bad breath in Pomeranian is an indication of periodontal disease and poor oral health. When you don’t remove plaque, bacteria multiply like crazy inside the mouth. Moreover, the bacteria produce a rancid smell that can make your eyes water.

Pomeranians might be cute, but they require a lot of care to keep their pearly whites in perfect condition. Otherwise, your adorable Pomeranian will lose their teeth in the prime of their lives. That’s something that not only will damage your Pom’s appearance, but you’ll have to adjust their diet to make up for the missing teeth.