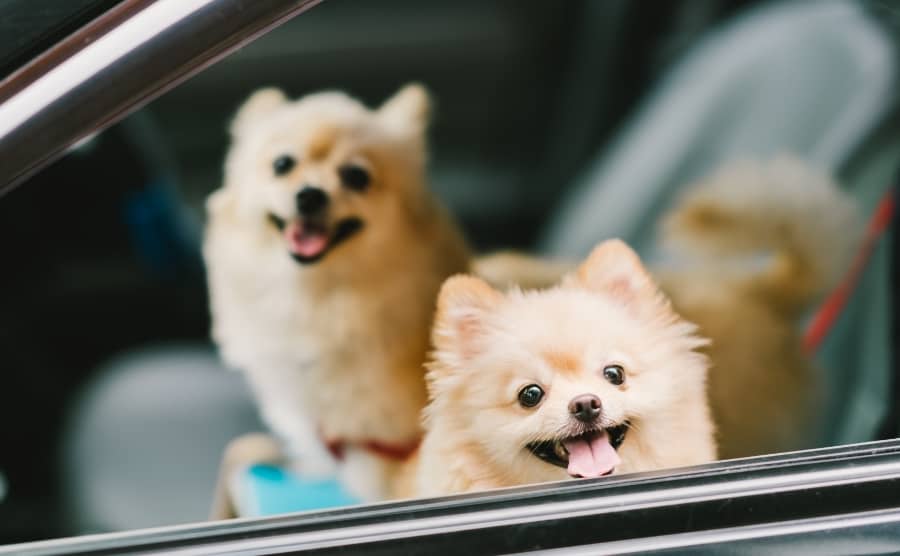 As a Pomeranian owner, there’s no doubt in you that your Pomeranian is smart. Your Pomeranian knows when you come home from work and how to manipulate you to give them tasty treats. But are they more intelligent than other dogs?

So, how smart are Pomeranians compared to other dogs? If you take Stanley Coren’s studies on dog intelligence, Pomeranians are classified as excellent working dogs. As such, they’re among the most intelligent dogs in the world.

So, how do scientists measure dog intelligence and which dogs are smarter than your Pom? Keep on reading to find the answers.

How Is Dog Intelligence Measured?

Thanks to science, we know more about dogs and how they think than before. However, the topic of how intelligent dogs remains a controversial theme among dog owners and scientists.

The main obstacle is that all dogs have a unique temperament and different learning abilities. So, making general statements about breeds based on a couple of dogs isn’t going to reflect the intelligence of the whole breed.

You get why it’s hard to determine how intelligent your Pomeranian is when compared to other dogs. You’d think that no one had tried to rank dog breeds based on how smart they are, and you’d be wrong.

Stanley Coren is one of the leading professors in the field of understanding dog behavior. He developed the first test on dog intelligence in 1976. More than forty years later, people still use his work to compare how smart dog breeds are, even if some heavily criticize it.

According to professor Coren, the intelligence of dogs depends more on their genes (51%) than their upbringing and environment (49%). He talks about three types of intelligence that determine how smart a dog is:

People created different breeds because they needed dogs that were good at hunting, herding, guarding, or being companions. A dog’s ability to perform this task shows their instinctive intelligence. In other words, if your Pomeranian is an excellent companion dog, they’re instinctively smart.

Adaptive intelligence, on the other hand, measures your dog’s problem-solving and analytical abilities. For example, some Pomeranians learn how to open doors by observing humans, while others might turn on/off lights.

For profession Coren, however, the most important type of intelligence is the working and obedience one. It shows your Pomeranian’s ability to learn from humans and their willingness and propensity to obey and understand commands.

As such, Stanley Coren uses working/obedience intelligence to rank over 100 breeds. While a lot of people don’t agree with his findings, other methods have confirmed the general rankings.

How Do Pomeranians Rank Among Other Dog Breeds?

So, how smart are Pomeranians when compared to other breeds? If we take the words of some Pomeranian owners, they will tell that Pomeranians are the most intelligent dogs. However, every dog owner fills the same about their dogs.

Let’s see what Stanley Coren has to say. According to his experiment, Pomeranians fall in the group of excellent working dogs. That means that they learn a new command in 5 to 15 repetitions and obey the first command 85% of the time or better.

When you think about it, this result is quite impressive. Your Pomeranian needs an average of 10 repetitions before they learn a new command and are more likely to obey a command they know instead of play deaf.

Some other dog breeds that fall in the same category are:

But which dog breeders are smarter than Pomeranians? Dogs in the brightest group learn new commands with five or fewer repetitions and obey the first command 95% of the time or better.

It won’t be a surprise that Border Collie, Poodles, German Shepherds, Labradors, and Golden Retrievers are among these brilliant dogs. However, what might surprise you is that Papillion, a toy Spaniel is also in the group of brightest dogs.

On the other hand, the bottom of the list is reserved for dogs that need more than 80 repetitions to learn a command. Afghan Hound, Basenji, Bulldog, and Chow Chow are among them.

However, since these breeds are highly-independent and stubborn, it’s not a surprise that they tend to play deaf when it comes to obedience training.

Can You Test How Intelligent Your Pomeranian Is?

Since we’re talking about how smart Pomeranians are when compared to other dogs, you might be wondering how to test your Pom’s intellect. I’ve got six easy tests that will show you how bright your Pomeranian is.

Get a towel/blanket and place it over your Pomeranian’s head. Give your Pom three points if they get free under 15 seconds. Award two points for 15-30 seconds and one point for over 30 seconds.

Place a treat under a sofa or a chair so that your Pomeranian can reach it only with paws. If they do it under a minute, give them three points. Two points are if your Pomeranian uses nose and head to reach the reward and one point if they give up.

Get a treat and three empty cups. Put the reward beneath a cup while your Pom watches. Distract them for a couple of seconds and then encourage them to find the food.

Give your Pomeranian three points if they do it in one try. Otherwise, give two points for two attempts and one point for three.

Build a barrier from cardboard and cut a small hole in it so that your Pomeranian can see the other side. Toss a treat behind the barrier and watch how your Pomeranian reacts.

Give three points if your Pom races to the other side in 30 seconds or less and two points if they try to climb through the barrier or knock it over.

Take your Pomeranian out of the room and move their favorite sleeping place. Let your Pom back and observe.

If they go straight for their spot – give them three points. Otherwise, give two points for hesitation and one point for a new napping place.

Pick your Pom’s leash at a time when you don’t usually go for a walk.

If your Pomeranian looks excited, they know what the leash means and deserve three points. Give them two points if they react when you reach the door and one point for no reaction.

What Does Your Pomeranian’s Results Mean?

After you’ve done all these small tests, you have to sum your Pomeranian’s points. Then check the scoring below:

As I already said, even dogs from the same breed have different abilities. So, don’t be disappointed with your Pomeranian’s results. You can always help your Pom get smarter by engaging in some brain-stimulating activities. For example:

It’s hard to tell how intelligent your Pomeranian is compared to other dogs. But what we can all agree is that Pomeranians are bright dogs and that they’re capable of incredible feats in the show ring.