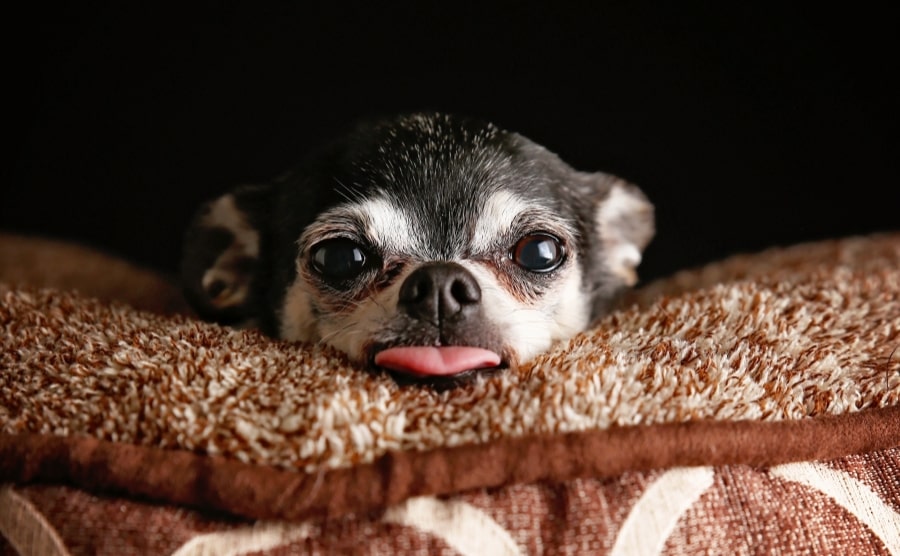 Have you ever wondered if your Pomeranian is smarter than a Chihuahua? Both Pomeranians and Chihuahuas have a fierce personality and do marvelous at agility courses. They’re intelligent, easy to train, and affectionate. But is one superior to the other?

So, what determines how intelligent a dog is, and can you make your Pomeranian smarter? Keep on reading if you want to know the answers.

How Intelligent Are Pomeranians and Chihuahuas?

Measuring your dog’s intelligence is a difficult task because there are no IQ tests for dogs. Moreover, breeds have different motivations and abilities. After all, you can’t expect a companion dog to be good at herding sheep, right?

Stanley Coren, a psychology professor and canine behavior specialist, talks about three types of intelligence in his book The Intelligence of Dogs:

Let’s see how Pomeranians and Chihuahuas do in all three aspects.

Adaptive intelligence covers a dog’s ability to learn from the environment and solve problems.

Does your dog know where you keep their treats, leash, or toys? They’ve learned it through observing your actions and making connections. That’s their adaptive intelligence.

Learning to open doors or the food cabinet demonstrates your Pomeranian or Chihuahua’s problem-solving abilities. They know there’s food inside, and they find a way to get to it. Or they don’t like the dark and learn how to turn on the lights.

Adaptive intelligence also shows a dog’s social awareness – their ability to read your body language to understand what you want them to do.

Instinctive intelligence refers to how well your dog does the job they’re supposed to do.

Some dog breeds are herders, retrievers, or guardians. Both Pomeranians and Chihuahuas are companion dogs, which means that their sole purpose is to keep you happy and cuddle with you.

Pomeranians and Chihuahuas tend to stick close to their owner and prefer to follow their humans wherever they go. Both dogs for close bonds with their families and love it when you pamper them.

I think that we can agree that both dog breeds do an excellent job as companions and that they both are affectionate, demanding, and adorable.

Working and obedience intelligence show how many repetitions dogs need before learning commands and on which attempt they obey a known command. Here’s where Pomeranian and Chihuahuas differ.

As per Stanley Coren’s research, Pomeranians understand new command in 5 to 15 repetitions and obey first command 85% or better. That puts Pomeranians in the “Excellent Working Dog” category.

Breeds in the “Brightest” list learn new commands in less than five repetitions and obey 95% or better. That would be Border Collies, Poodles, and German Shepherds, among few.

Chihuahuas, on the other hand, are listed as having “fair working and obedience intelligence.” They learn commands in 40 to 80 repetitions and obey the first command 30% of the time or better. That earns them the 67th rank.

Interestingly, both dog breeds are capable of learning over 165 words. That’s the vocabulary of a toddler, but Chihuahuas seem less inclined to do as they’re told.

Intelligence varies from dog to dog, just like it varies among people. As such, it’s hard to say how intelligent a whole dog breed is or find accurate ways to measure it.

After all, we have some Pomeranians that know how to open doors and others who can’t seem to remember where their food is. Some Chihuahuas bare able to escape fenced yards, while others get scared of their tails.

Moreover, Stanley Coren’s work has been criticized on several fronts:

As such, it’s hard to accept what Stanley Coren wrote as a universal truth. Dogs he placed on the bottom, such as Afghan Hounds, Basenji, and Chow Chow, are intelligent but hard to train because they’re used to working without human supervision.

Chihuahuas might be relatively easy to train when you compare them with a Chow Chow. However, they can be willful and stubborn. To teach them to obey, you have to convince a Chihuahuas that it’s their idea and that it’s fun to do so.

Pomeranians, on the other hand, are eager to please. They respond well to training as long as you establish yourself as the leader of the pack. Moreover, they love to learn tricks. They can be stubborn, but it’s easy to motivate them with food and attention.

So, it’s not a big surprise that Chihuahuas ranked so low in Stanley’s Coren’s list and Pomeranians so high. It’s not an accurate measurement of how intelligent both breeds are.

After all, it’s wrong to think that dogs are dumb just because they might not obey our commands or follow orders.

Can You Make Your Pomeranian Smarter?

Pomeranians and Chihuahuas are capable of understanding and learning more than you think. While both breeds are naturally smart, you can help their intellect to develop.

So, if you want your Pomeranian to be smarter than a Chihuahua, I’ve got a couple of suggestions for you.

1. Let Your Pomeranian Use Their Senses

I’ve seen a lot of owners that carry their Pomeranians everywhere in bags or hands.

While toy breeds are fragile, your Pomeranian and Chihuahua need to use their sense to develop them. Instead of carrying your Pomeranian, let your dogs explore the world and stay close by to keep dangers away.

When at home, you can hide treats around the house and let your Pomeranian locate them through their fantastic sense of smell. You can also see how well your Pomeranian can read your body cues to find the rewards.

As I already mentioned, Pomeranians can learn around 165 words, which is far more than the commands you use during training. So nothing is stopping you from expanding your Pomeranian’s vocabulary even more.

It’s simple to do it. Get three objects and say their names to your Pomeranian. Keep repeating them for a while. You want your Pomeranian can make a connection between the word and the object.

Then line the objects on the ground and ask your Pom to bring you one of them. If they succeed, you reward them and continue to practice. Don’t get discouraged if your Pomeranian doesn’t get at first. Sometimes these things need time.

It’s fun to watch your Pomeranian chase bubbles, but you can also try some mind-stimulating games. For example, you can hide a treat beneath three cups and ask your Pomeranian to find where the tasty food is.

Moreover, there’re plenty of interactive toys on the market. They’re designed to challenge your Pomeranian and develop and stimulate their brains.

Start with some easy ones for beginners. When your Pomeranian gets the hang out of it, you can move over to more complicated puzzles.

Both Chihuahuas and Pomeranians are intelligent dogs who excel at being human companions. They’re capable of learning a lot from observing their surroundings and reading your body language. As such, it’s impossible to say which one of them is smarter than the other.