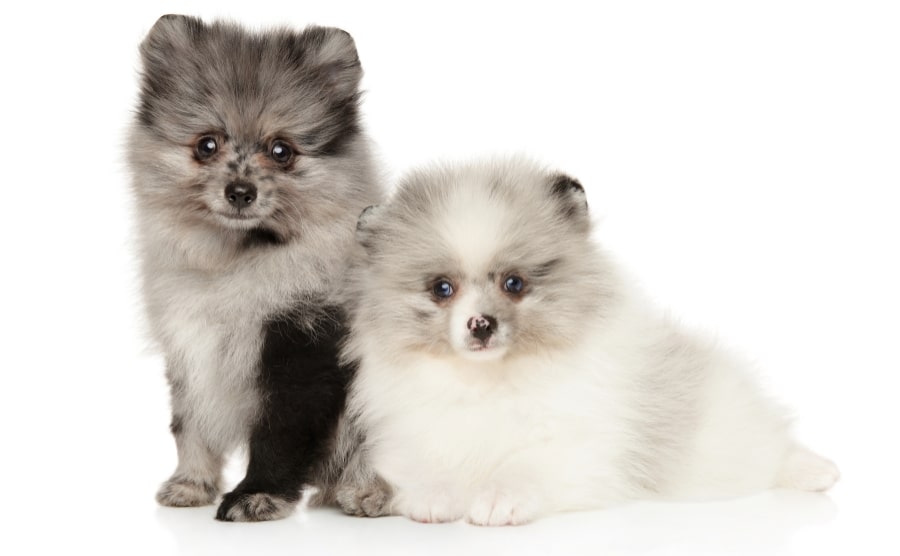 So, I’m going to tell you all you need to know about Pomeranian coat colors and why Pomeranians change color. Just keep on reading.

What Are the Main Pomeranian Colors?

A Pomeranian can be solid (one color), partis (two colors), tri-colored, or multicolored, for example, specked Pomeranians. But what determines a Pomeranian’s coat color? The answer is genes, of course.

Each of your Pomeranian puppy’s parents has dominant and recessive genes. The way they combine determines your Pomeranian color and pattern. That’s why a Pom might look differently from their parent.

So, let’s see the most common Pomeranian colors.

Orange Pomeranians come in different hues – from light to dark. Sometimes the orange is so dark that it looks red. As such, it’s easy to confuse orange and red Pomeranians.

There is a line between orange and red Pomeranians, but it’s blurry and open to interpretation. Think about red Pomeranians as Poms with rust-colored coats and reddish-orange fur.

Sable Pomeranian puppies have a solid base color and guard hair (the topcoat layer) with dark markings. Sometimes the sabling is so light that it’s impossible to notice it in pictures.

Since the sable gene is dominant, if you pair a sable Pomeranian with a non-sable Pom, you’ll get a sabled one.

The color of cream Pomeranians ranges from almost white to light brown. Often puppies are born white and their coat darkness as they go through their coat change.

True black Pomeranian puppies have black eye rims as well as black paws, lips, and noses. They don’t have a secondary color. If they do, they’ll be considered partis.

Blue Pomeranians are so beautiful, so it’s a shame they’re rare. Since blue coats might appear black, look at the skin and nose of your Pomeranian puppy. They should be the same color as the coat.

Any chocolate Pomeranian puppy will have dark brown skin pigmentation, unlike cream ones who have black. Their color might vary from dark brunette to light brown.

Beaver Pomeranian puppies have brown coats, ranging from light to chocolate brown. But what distinguishes them is the beaver color of their noses, paw pads, lips, and eye rims.

Besides these 9 main Pomeranian colors, you can also see puppies with brindle and merle patterns. Lavender Pomeranians and Wolf Sable one also exist, but they’re rare.

Why Do Pomeranian Puppies Change Color?

People call it puppy uglies because Pomeranians shed heavily and unevenly. You can expect that your Pomeranian will have some bald spots on their coat and patches of long or thin hair. That’s because the new fur grows at a slower rate than the rate of the falling old one.

So, your Pomeranian puppy might have quite the odd look for a couple of months. When the new coat does appear, it might not be the same color as before. That’s normal, and it’s not a reason to panic.

The following color changes are possible:

Besides puppy uglies, Pomeranian can also change colors if you expose their coats to too much sunlight.

In these situations, the color of your Pom’s coat might fade or get burnished. Since too much sunlight also leads to dry and brittle hair, you should always protect your Pomeranian puppy when you’re out in the sun.

Does Your Pomeranian’s Coat Color Matter?

Don’t worry if you’ve registered your Pomeranian puppy as one color, but they turn out to be another. That happens quite frequently, and it’s not a reason for worry. You can contact your kennel club and ask them if it’s possible to change the registration color.

Usually, the American Kennel Club (AKC) accepts all colors and variations, and it doesn’t discriminate between solids or multicolored ones in the show ring.

However, the only Pomeranian color that you might have problems with is Merle. While the AKC recognizes it, other kennel clubs don’t.

Merle Pomeranians have a speckled appearance with a mixture of blue, grey, red, or tans. They usually have blue eyes, and that’s why some kennel clubs don’t recognize it as an accepted color.

As per the Pomeranian breeding standard, the acceptable eye color is dark. However, exceptions are made for self-colored Pomeranians such as blue and chocolate whose eyes and noses match the color of their fur. So, while the AKC accepts Merle Pomeranians, they frown upon blue eyes.

Moreover, the AKC doesn’t recognize Lavender Pomeranians, and these puppies have to be registered as another color. Usually, they’re classified as Blue, since people believe the lavender color is the result of diluted blue genes.

If you’re looking for a Pomeranian of a specific color, you should contact a breeder that focuses on certain coat colors and make inquiries. Ask to see both parents so that you can get a rough idea of what color your Pomeranian puppy will be.

However, you have to be prepared that the puppy might not match your expectations. Sometimes genes skip a generation or two, and it’s impossible to predict when and why.

Often Sable Pomeranians are those that change drastically during the puppy uglies because the dark markings aren’t visible on their single-layered coat. However, the black tips become apparent when the double coat starts to emerge.

Besides Sable Pomeranians, a lot of White Pomeranian puppies often turn out to be Cream when they grow up.

No matter what color your Pomeranian puppy will be, I’m sure that they’ll be majestic and unique. Just remember to take good care of their splendid, fluffy coats so that the hair doesn’t get damaged by the elements.