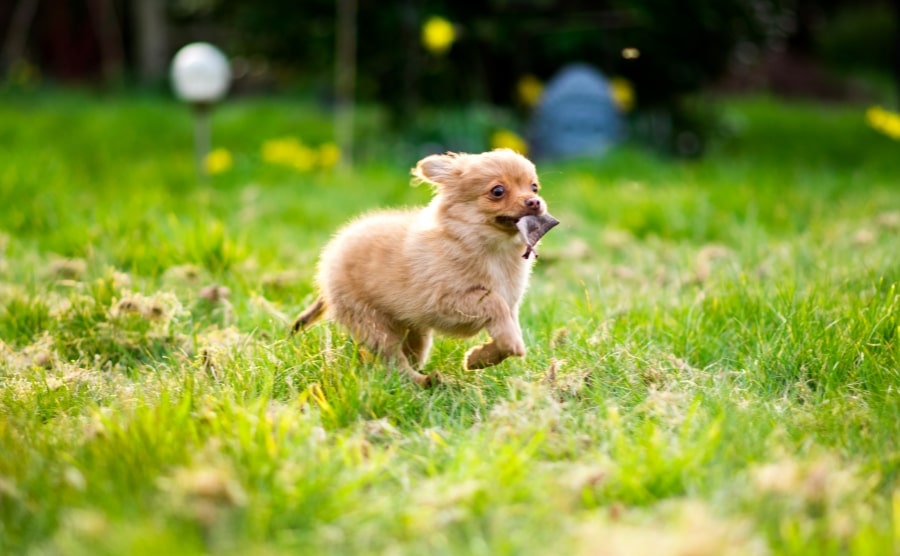 Have you ever had a Pom that looked just like a Chihuahua from another angle? Pomeranians are famous for their fluffy coats, curved tails, and fox-like faces. Most don’t look anything like a Chihuahua, so you’re right to wonder what’s happening.

So, are Pomeranians and Chihuahua similar in appearance, and what does a Chihuahua and Pomeranian mix look like? Keep on reading to find the answers.

How Similar in Appearance Are Pomeranians and Chihuahuas?

Usually, Chihuahuas and Pomeranians look nothing alike, and it’s easy to tell them apart. It’s unlikely that you would bring a Chihuahua home from the dog park, thinking that it was your Pomeranian. But let’s point the main differences.

Moreover, Chihuahuas tend to weigh less than Pomeranians and have to be under 6 pounds to fit the breeding standard. Pomeranians, on the other hand, weight around 3-7 pounds, but some might be quite bigger – around 10 pounds.

As such, you start to wonder how your Pomeranian could look like a Chihuahua. Let me tell you that it’s possible even if you’ve got a purebred Pomeranian.

When you say “Chihuahua,” most people think about short-haired ones due to their representation in the media.

But Chihuahuas also have a long-haired variety, and these dogs do have some similarities in appearance to Pomeranians. If you’re a first-time Pomeranian owner, you could take them for a strange-looking Pom.

Long-haired Chihuahuas have a soft-textured coat with/without an undercoat, and their fur might be flat or wavy. Moreover, some have full, long tails similar to the Pomeranian’s plume tail, a large ruff around the neck, and feathering on the legs.

However, long-haired Chihuahuas have a thinner coat than Pomeranians, and their fur lies close to the body. They also don’t have that fluffiness that Poms are famous for, so their coats are never as majestic as a Pomeranian’s.

Moreover, Chihuahuas have longer and leaner bodies than Poms and don’t have the same fox/teddy bear expression as Pomeranians.

Still, your Pomeranian might look like a long-haired Chihuahua, especially whenever your Pom is going through their puppy uglies. During that period, your Pom loses their single coat so that they can replace it with the double adult one.

As a result, your Pom’s fur gets thin and looks odd and scruffy. Some Pomeranians look so strange that their owners genuinely wonder if they’ve got the wrong breed.

However, your Pomeranian should have their adult double coat by the time they’re 12-15 months old. If their coat remains thin and lacks the usual fluffiness, your Pom might be a mixed dog.

It’s also possible for your Pomeranian to have a Chihuahua parent somewhere in the bloodline. Genes have a fun way of working, and they tend to skip generations only to appear when you least expect them to.

If you’re wondering why your Pomeranian looks like a Chihuahua, you have to consider the possibility that your Pom is a mixed breed. That’s no so unlikely as you might think.

Designer breeds have steadily gained popularity in recent years. Since Pomeranians are such popular companion dogs, some breeders have intentionally crossed them with other breeds, including Chihuahuas.

So, what do you get when you mix Pomeranians and Chihuahuas? You get a Pomchi, as this cute Pomeranian/Chihuahua mix is called, and it resembles a purebred Pomeranian quite a lot.

Since Pomeranians and Chihuahuas are toy breeds, the Pomchi is relatively small and weighs from 4 to 12 pounds. However, some might be bigger or smaller.

There’s no breeding standard because there are too many variables when you cross two dogs from different breeds. Unlike purebred dogs, you can never predict what the puppies would look like or what their temperament will be.

Usually, Pomchies take after their Pomeranian parent and have a fluffy coat, curly tail, and erect ears.

Most Pomchies are sable or brown, but they can also be blue and tan, cream, or black and tan. Their coat might be single or double, long or short, but it tends to be soft and silky to the touch.

The Pomchi’s temperament isn’t that different from a Pomeranian or a Chihuahua one. They’re small dogs with a big personality, full of spunk and mischief.

Since both Pomeranians and Chihuahuas are companion dogs, Pomchies thrive when they’re the center of attention. They tend to bond closely with a single person and stick to their side like glue.

As you see, it’s easy to mistaken these Pomchies for purebred Pomeranians. However, when you look at their faces and eyes carefully, you’ll notice traces of their Chihuahua parent.

What Dogs Are Similar to Pomeranians?

While Pomeranians and Chihuahuas have little in common when it comes to appearance, some dog breeds do resemble Pomeranians a lot. Let’s take a quick look at some of them.

The Keeshond is a close relative of the Pomeranian and a member of the Spitz family. As such, it’s no wonder that these two dogs are hard to tell apart.

Both dogs have the same fluffy coats, plumed tails, and expressive faces. However, the Keeshond weighs around 36-40 pounds, and their coat is either grey, black, or cream.

Nevertheless, if you didn’t know better, you’d take them for a throwback Pomeranian.

Another member of the Spitz family is the American Eskimo Dog. These adorable dogs are very similar to Pomeranians thanks to their fluffy coats. Moreover, the breed has three different sizes, and the toy one is close to a Pomeranian’s size.

However, the main difference is that Eskimo dogs are only white or biscuit cream, while Pomeranians come in a multitude of colors.

If you have to compare a white Pomeranian and Japanese Spitz, you won’t find many differences between the three.

However, the Japanese Spitz is a lot bigger than the Pomeranian with a weight of 15-19 pounds. You might confuse them with throwback Pom if it wasn’t the fact that Japanese Spitzes are all white.

The Volpino Italiano is another breed that has the Pomeranian’s thick coat, plumed tail, and triangle ear. However, this dog is almost twice the size of a standard Pomeranian and is about 11 inches tall.

Moreover, Volpino Italiano is a rare breed that almost got extinct. As such, you’re unlikely to come across is on accident.

While the Finnish Lapphund doesn’t belong to the Spitz family, these cute dogs do resemble Pomeranians a lot. They have plumed tails, feathering on the legs, and thick, dense coat.

If it wasn’t for their wolf-like faces, you might easily confuse them with a Pomeranian. In addition to this, the Finnish Lapphund are medium-sized dogs with a weight of around 33 – 53 pounds, so they’re much bigger than the 4-7 pound Pomeranian.

Why your Pomeranian looks like a Chihuahua is hard to tell. Your Pom might be a mixed breed, they might be going through their puppy uglies period, or it’s a crazy coincidence. You can’t really tell without genetic testing.