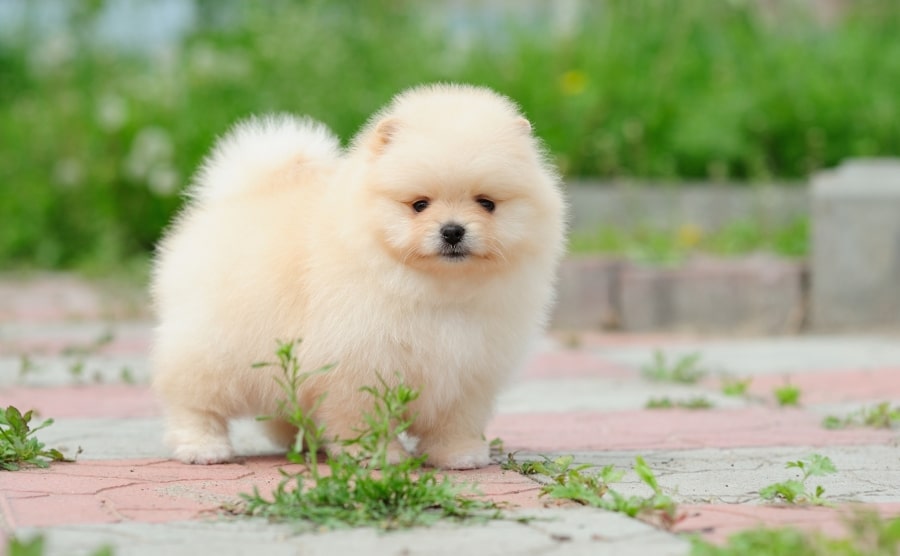 Are you wondering what a Pomeranian puppy looks like? You might if you have rescued a puppy off the streets or adopted one from the shelter. Sometimes Pomeranian puppies look so odd that you’re right to question their breed.

So, what does a Pomeranian puppy look like? Pomeranians belong to the Spitz family, and they have a wedge-shaped head, almond-shaped eyes, erect ears, and a face that resembles a fox or a baby-doll. In general, Pomeranians come in a variety of colors, including white, black, orange, tan, and sable.

So, what are the Pomeranian breed standards, and how can you tell if your Pomeranian puppy is purebred? Keep on reading to find the answers.

To get a general idea of what a Pomeranian puppy looks like, you can read the American Kennel Club’s breed’s standard. But you have to keep in mind that many Pomeranian puppies might not fit that standard to the letter. That’s because genes have a funny way of combining.

A significant diversion from the breeding standard will prevent you from getting your Pomeranian in the show ring. However, it doesn’t matter that much for pet Pomeranian puppies.

So, let’s see the most prominent features of Pomeranian puppies and what the standard has to say about them.

Pomeranians are a toy dog breed, and the American Kennel Club’s breed standard specifies an adult weight between 3-7 pounds. The usual height of a Pomeranian is around 6-11 inches.

For show Pomeranians, the ideal weight is between 4-6 pounds. However, it’s not uncommon for pet Pomeranians to weigh more than 7 pounds.

In fact, there’re Pomeranians who are heavier than 14 pounds due to gene throwbacks. These Pomeranians aren’t obese or overweight. They just resemble their ancestors, who used to pull sleds.

Pomeranians under 3 pounds, on the other hand, are the results of the deliberate breeding to produce teacup Pomeranians. Most breeders frown upon this practice because such puppies are rarely healthy, and they don’t improve the breed in any way.

The weight and size of Pomeranian puppies vary. You can get a general estimation of the adult weight of your Pom by multiplying their weight at 2 months by 3 and adding 1 pound.

Pomeranian puppies have a square body shape, which means that they’re as tall as long. They have small triangle ears that should stand erect by the time the puppy is 6 months old.

Eyes are dark and medium-sized, and the nose is black or the same color as the coat. Hair is longer around the neck and chest, and it forms a majestic frill.

The Pomeranian breed standard specifies that a Pomeranian puppy should have a muzzle that is 1/3 or 2/3 of the length of the skull. That’s what gives Pomeranians their fox-like appearance. However, some Poms have shorter muzzles, which results in a teddy-bear face or baby-doll one.

The heavily plumed tail is of the main characteristics of Pomeranians, and it usually lies flat on the back. However, your Pomeranian puppy can carry their majestic tails in different positions.

Pomeranians should have a scissored bite, which is normal for dogs with a long muzzle. The standard allows one tooth out of alignment, but no more.

Pomeranian puppies have a single coat, which is soft and silky to the touch. However, adult Pomeranians have a double coat with a dense undercoat and an overcoat of guard hairs.

As I already mention, Pomeranian puppies exist in a variety of colors and patterns. The breed standard allows all variations and judges them on an equal basis.

How to Tell If My Pomeranian Puppy is Purebred?

When you purchase your Pomeranian puppy from a respectable breeder, you can be 99% certain that you have a purebred Pomeranian.

Professional breeders provide documentation that shows your Pomeranian puppy’s pedigree. These breeders would rarely resort to forging papers or selling a Pomeranian puppy that doesn’t match the breeding standard.

The question is how to tell if a Pomeranian puppy is purebred when you adopt them from a shelter or rescue them off the street.

You can always look at the Pomeranian’s breed standard and check how much your Pomeranian puppy fits it. But that won’t give you any proof of your Pom’s pedigree.

Alternatively, you can try to track down your Pomeranian’s parents and see if they’re registered as purebred. However, this endeavor could be too time-consuming or impossible.

So, if you want to be sure your Pomeranian puppy is purebred, you need A DNA test. It’s not as complicated as it might sound or as expensive as you expect.

You can buy a dog DNA test kit from Amazon or one from the American Kennel Club. You swab the inside of your Pom’s mouth to collect saliva and send it for testing. Then you wait a couple of weeks for the result.

Such a test costs between $50 – $150, depending on the company and who does the testing. Usually, it’s highly accurate in determining the genetic makeup of your pet.

What Are Pomeranian Puppy Uglies?

One of the reasons owners wonder about what a Pomeranian puppy looks like is puppy uglies. One day your Pomeranian puppy is as beautiful as you imagine, and the next day they’re losing their soft and silky fur. Fortunately, that’s normal.

Between the age of 4 and 6 months, all Pomeranian puppies start to shed their single coat to make room for the double one. This shedding is different from the way adult Pomeranian dogs shed because it’s more prominent and uneven.

Usually, the fur falls quickly, and the new one takes its time to grow. As a result, Pomeranian puppies tend to have the appearance of a badly groomed dog or one who has mange.

Owners often report an uneven coat, patches of thin hair, and almost bold spots. Due to the hair loss, most Pomeranian puppies also appear slimmer than usual. Hence, this phase is known as puppy uglies.

While not all puppies are affected in the same way, more than 80% of all Pomeranian puppies go through this stage. The lucky 20% experience an even coat change and keep their majestic looks.

Usually, owners who aren’t familiar with puppy uglies freak out and think that their Pomeranian puppy has a skin disease. Others start to doubt the pedigree of their pet.

However, this drastic hair loss is temporary. By the time your Pomeranian puppy is 10 months old, their adult coat should be growing nicely. If that’s not happening, you have to talk to your vet.

You can’t do anything to prevent puppy uglies. But you can speed things up a bit by brushing your Pomeranian puppy regularly to get rid of loose fur. You can also bathe your Pom every three weeks to remove body oils and keep the hair follicles open.

Can a Pomeranian Puppy Change Color?

Have you fallen in love with your Pomeranian puppy’s color? Don’t be so quick because Pomeranian puppies can change color. The whole coat might darken or lighten, or some patches of it might slightly change color. In addition to this, sabling and stripes might disappear or become more apparent.

All these changes happen during puppy uglies. So, it’s common for a Pomeranian puppy to have a different color than the one they’re registered with.

Some specialists recommend that you check the hair behind your Pom’s ear to get an idea about their adult color.

Pomeranian puppies are one of the most adorable dogs on the planet. While the American Kennel Club has a strict breed standard, not all Poms fall within its boundaries. As long as your Pomeranian puppy is healthy and growing big and strong, it’s not that important if they’re a purebred or a mixed breed.