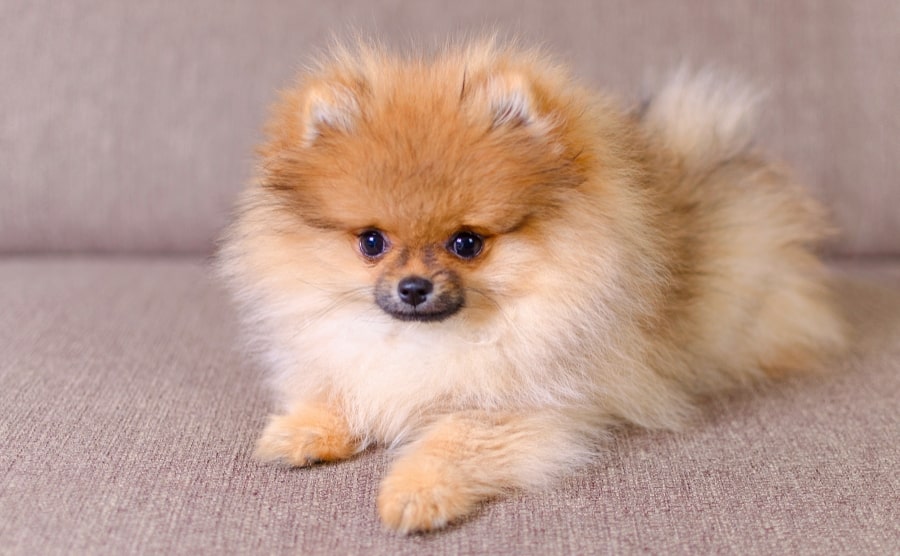 Have you ever wondered when Pomeranian puppies shed? You might if you’re finding more dog hair around the house than usual, and you’re worried about your Pom losing their majestic, colorful coats.

So, why is your Pomeranian puppy shedding so much, and how can you control the shedding? Keep on reading to find the answer.

What Are Pomeranian Puppy Uglies?

Let me tell you something. All dogs shed, even those people call “hypoallergenic.” When you think about it, even humans lose a bit of hair every day.

But when it comes to Pomeranian puppies, they experience a type of shedding different from the shedding you see in mature dogs. Specialists call this phase “puppy uglies,” and it can be quite shocking for inexperienced owners.

So what happens to your Pomeranian puppy during this shedding stage? To understand it, you have to know about a couple of things.

Young Pomeranian puppies have a one-layer coat with short hairs. This baby fur is so smooth and soft to the touch that it feels like silk when you run your hand over it.

On the other hand, an adult Pomeranian has a double coat made of a thick and dense undercoat and an overcoat of long, guard hair. It’s not as soft as the puppy one and has more texture and thickness to it.

So Pomeranian puppies have to lose the silky fur that makes them so stunning and fluffy. Otherwise, the adult coat won’t have enough space to grow. While it’s sad to watch the baby coat disappear, it’s a normal process, and you can’t do anything to prevent it.

As already mentioned, this coat change begins between the age of 4 and 6 months old. Usually, you’ll see some drastic shedding, very different from the way an adult Pomeranians shed. Often petting, bathing, or brushing your puppy might leave clumps of hair in your hands.

But why do people call it puppy uglies? Unlike seasonal or year-round shedding, puppies don’t shed evenly. Depending on how fast/slow the new coat comes in, your Pomeranian puppy might have quite an odd look.

Imagine someone who has never used scissors giving your Pomeranian puppy a haircut, and you’ll have a close idea of how puppies look during this stage. Your Pomeranian puppy might have patches of short and long hair and fur so thin at places that you can see the skin.

Fortunately, that’s temporary, so no matter how bad your Pomeranian puppy looks like, they will transform into a beautiful adult Pomeranian.

Usually, by the time your Pomeranian puppy is 10 months old, the adult coat should be growing in nicely. It will fully replace the puppy one by the 12th-15th month and restore your Pom’s magnificent appearance.

What Other Changes Occur During Puppy Uglies?

Besides losing a ton of hair around the house, Pomeranian puppies might look thinner than usual during these couple of months.

That’s because most of the fur that gives your puppy their rounded looks is gone. Besides that, your Pom is maturing to their adult size, and they lose all that puppy fat that makes them so adorable. However, if your puppy looks too thin or has a persistent lack of appetite, you should bring them to the vet.

It’s also not uncommon for your Pomeranian puppy to change their color when they grow into their adult coat. For example, a white Pomeranian puppy might end up creamy once they get over the puppy uglies, or a black Pom might turn up chocolate brown.

It doesn’t mean that someone has deceived you and given you a mixed breed dog. You can check the color of the fur behind your Pomeranian puppy’s ear. That will give you an accurate estimation of how your Pomeranian’s coat will look like when they’re adults.

A lot of owners often freak out when they notice that their Pomeranian puppy is losing so much fur and getting bald. They think that it’s some skin disease.

Fortunately, most of the time, the shedding is normal because your Pom is going through their puppy uglies.

However, sometimes other conditions mimic puppy uglies and cause your Pom to lose fur. That’s why it’s so vital that you know when Pomeranian puppy sheds and pay attention to any sudden coat changes before or after the puppy uglies.

BSD starts with patches of fur that look different than the rest and have wooly texture. Eventually, this wooly hair thins out and then ultimately falls out, leaving a bald spot. Sometimes the exposed skin turns black due to lack of sun protection, but the patches might also remain pink.

Despite how it looks, BSD isn’t painful for your Pomeranian. However, it leads to severe hair loss along the chest, belly, and shoulders. Fortunately, there are some treatments that your vet can recommend.

How to Care for My Pomeranian During Puppy Uglies?

Now that you know when Pomeranian puppies shed, you might be wondering what you can do to make the change easier for your Pom and you.

Your Pomeranian puppy might not look very dirty during their puppy uglies. But bathing them every three weeks will remove the accumulate body oils and any stuck hairs. That will prevent clogged pores and hair follicles.

To bathe your Pomeranian, you need a high-quality shampoo and conditioner suitable for Pomeranians. Your Pomeranian’s puppy skin is very vulnerable during the puppy uglies, and using the wrong bathing products might damage or irritate it.

I understand that you might be reluctant to brush your Pomeranian puppy often during their puppy uglies. You don’t want to make it worse. However, all the loose fur still has to shed, and brushing helps immensely.

Moreover, brushing stimulates the blood flow to the hair follicles, which will speed up the rate in which the new coat is growing in.

Just remember that your Pomeranian’s puppy skin is very sensitive, so you can’t use the same grooming tools as you do for an adult Pom.

For places where the fur is thin or missing, a soft bristle brush will do the trick. The spots with longer hair you can brush with a bubble-tipped pin brush.

Another way to help your Pomeranian puppies when they shed is to use leave-in conditioner spray. It will moisturize the skin, repel irritants, and keep the coat soft. Conditioner spray will also prevent static while you’re brushing your puppy.

Your Pomeranian puppy might get cold when they’re shedding since they don’t have the protection of their double coat yet. So, you should keep your Pom puppy inside at an indoor temperature of 71 F. You can also dress them in a warm shirt or sweater if they seem cold.

It’s not uncommon for Pomeranian puppies to have dry skin or sore spots during their puppy ugliest. You have to remedy these as soon as possible to prevent skin infections. Talk to your vet for the best healing cream for shedding Pomeranian puppies.

When your Pomeranian puppy sheds, you should do everything possible to keep your puppy comfortable and warm. Remember that it’s normal for Pomeranian puppies to look very scraggy when they’re going through puppy uglies. But if you’re worried about black skin diseases, you should talk to your vet.