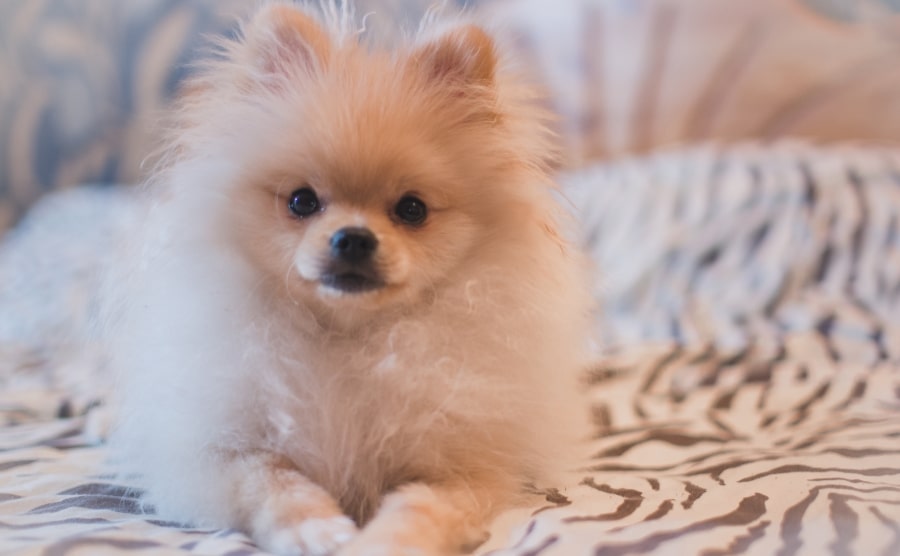 Pomeranians are famous for their thick and fluffy coats that contribute to their majestic appearance. However, when you look at your Pomeranian puppy, you might be wondering why their fur isn’t fluffy as you expected it to be.

So, when do Pomeranian puppies get fluffy? Pomeranian puppies have a single layer coat when they’re born, so their fur isn’t as long as that of older Poms. As your Pomeranian matures, their puppy coats fall, and their fluffy ones grow by the time your Pom is one-year-old.

So, today we’re going to talk about why your Pomeranian isn’t fluffy and how to take care of their coats.

Why Does My Pomeranian Puppy Look Scruffy?

If you’re a first-time Pomeranian owner, you might be quite shocked when you adopt your first Pomeranian puppy.

Usually, you’ll get a Pomeranian puppy when they’re eight weeks or older. Such young puppies have a coat that’s a couple of inches long. It’s very soft and silky to the touch, but it’s not like the majestic long fluff of the adult Pomeranian.

Unlike Pomeranian puppies, adult Pomeranians have double coats – one layer of a thick undercoat and an outer layer consisting of guard hairs. It’s not as silky as a puppy coat because it has a practical function – to protect your Pomeranian from the elements.

So, the short puppy coat isn’t permanent, and all of that soft and silky fur has to fall. Otherwise, the adult coat can’t grow in its place. The process starts around the time your puppy is about four months old with heavy shedding.

Just petting or brushing your Pomeranian puppy might leave clumps of hairs in your hand. That’s very different from the way adult Pomeranian sheds, but it’s temporal, fortunately.

The problem is that the new hair doesn’t grow at the same rate that the puppy one falls. As a result, your Pomeranian puppy might look very strange with patches of thin or missing fur and an uneven coat with short and long hair.

Sometimes, the hair loss is worse along the legs and chest. Other times, your Pomeranian puppy might shed heavily around the eyes and look as if they’ve burned their eyebrows.

Owners often panic when they see that their Pomeranian puppy is losing their baby fur so drastically. Skin disease is the first thing that comes to mind, but what your Pomeranian is going through is called “Puppy Uglies.”

Fortunately, it’s entirely normal for your puppy to look as if somebody has given them a bad haircut.

Usually, by the time your Pomeranian puppy is 10-12 months old, the new coat should be coming in nicely and evenly. However, some puppies need an extra month or two before they regain their magnificent appearance.

How Common Are Puppy Uglies?

Specialists estimate that around 80% of all Pomeranian puppy go through puppy uglies before they get fluffy and majestic.

Not all Pomeranian puppies are affected in the same way. Some Poms look as if they’ve contacted mange, but others will experience an even coat change, and you might not even notice what’s happening.

What’s important is to keep an eye on your Pomeranian puppy’s skin during this process. It’s sensitive where the fur is thin or missing and might get damaged by the sun or when your Pomeranian scratches.

Why Does My Pomeranian Puppy Have Short Hair?

As I already explained, puppy uglies are one of the most common reasons why your Pomeranian puppy isn’t as fluffy as you expected them to be. However, we have to mention three other reasons.

1. Your Pomeranian Puppy Is a Mixed Breed

If you haven’t purchased/adopted the dog from a respectable breeder, you might get a mixed Pomeranian puppy. Depending on the dominant genes, your Pomeranian mix might have short, medium, or long hair, and they might grow much bigger than the average Pom.

A mix in the bloodline can affect the appearance of your Pomeranian puppy, even if the mix was a couple of generations ago.

Moreover, even purebred Pomeranians might have short hair sometimes because not all purebred Poms fit the American Kennel Club’s breeding standard. Reputable breeders always strive to produce litters that match the standard, but backyard breeders don’t care about it.

That’s why you should get your Pomeranian puppy from an American Kennel Club breeder with a good reputation.

Rarely, Pomeranian puppies develop Black Skin Disease (BSD). It’s a condition in which your Pomeranian experience drastic hair loss that is irreversible. Usually, it starts with patches of fur that turn wooly in texture, and then they fall, leaving a bald spot.

Sometimes owners mistake BSD for puppy uglies. So, if your Pomeranian puppy’s coat doesn’t look right to you and your Pom is over two years of age, you should have them examined.

3. Your Pomeranian Is Shedding

Usually, Pomeranians shed twice a year heavily, depending on the weather conditions. When they do, it might appear as if their coat is getting short and thin.

That’s because a lot of the thick inner fur falls, and the guard hairs don’t stand up as before. As a result, the coat might lose some of its fluffiness and lay down flat.

Fortunately, that’s temporal, and your Pomeranian’s coat should regain its fluffiness once the shedding stops.

How to Brush My Pomeranian Puppy’s Coat to Make It Fluffy?

When your Pomeranian puppy gets fluffy, you have to take extra care of their coat. A Pomeranian majestic appearance requires daily brushing sessions because their fur is prone to matting. Once the fur tangles, it’s twice as hard to untangle it.

So, here’s how to brush your Pomeranian’s coat to make it look fluffy:

Before you go to brushing, you have to comb your Pomeranian thoroughly to remove any mats and tangles. Spritz the two-level comb with the conditioning spray and go through the whole coat section by section. You’ll need to re-spray the comb every 5-6 strokes.

The comb’s wide-tooth side is for large areas, while the narrow one is for small, hard-to-reach ones.

If you find a tangle, you have to isolate it. Then use a detangle spray and your handle to untangle it. For trickier mats, you might use the mat remover.

Usually, Pomeranian puppies get tangles between the hind legs and the front legs, so remember to check these areas. Don’t forget the tail as well.

When you have combed your puppy well and removed all tangles, it’s time to brush them thoroughly. Usually, owners forget to brush the armpits, the tail, and under it, so pay attention to these areas. You might start from the rear and work your way to the front of your Pomeranian puppy.

Use a comb for small places where you can’t work with the brush. Don’t forget to use the leave-in spray as you brush your Pomeranian puppy.

To make your Pomeranian look fluffy and give their hair more volume, you can brush the fur upwards.