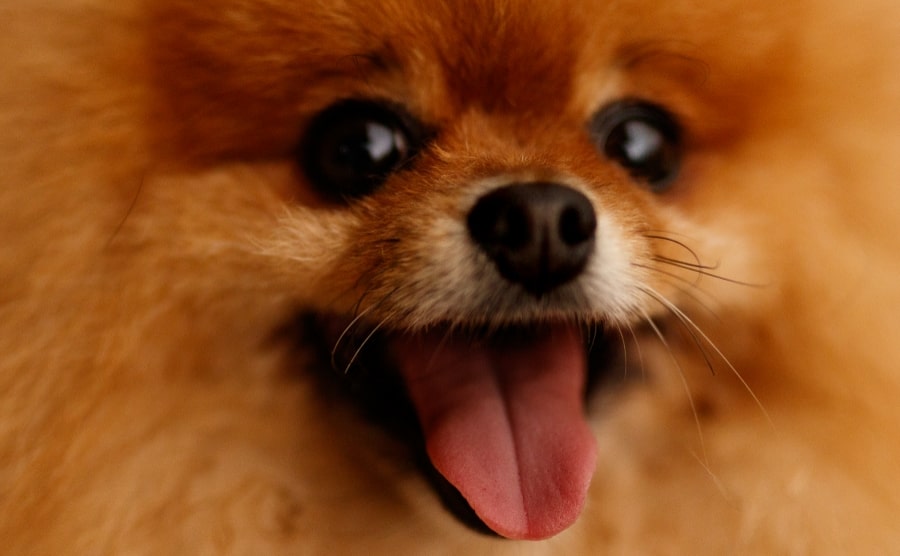 Have you ever heard people talking about throwback Pomeranians? If you have, you might be wondering what’s so special about these dogs.

So, today we’re going to talk about eight amazing throwback Pomeranian facts so that you can impress friends and family with your knowledge of the Pomeranian breed.

Do you know that the term throwback Pomeranian doesn’t officially exist? It’s something breeders use to describe Pomeranians larger than the breeding standard.

For a Pomeranian to be considered a throwback, they have to be larger than 14 pounds, and their weight should be proportional to their bodies. In other words, they shouldn’t be obese or overweight.

However, sometimes you encounter a puppy that’s a couple of pounds over the breeding standard, but not big enough to be considered a throwback Pomeranian. If this puppy isn’t overweight, then it’s likely that they have partial throwback genes.

When you look at the tiny dog in your lap, it might be hard to imagine that these adorable companion dogs used to herd livestock or pull sleds across the winter snow.

What you don’t know is that breeders developed the Pomeranian breed from medium-to-large Spitz dogs. Close relatives to the Pomeranian are the Samoyed, the German Spitz, and the American Eskimo dog.

These ancient Spitz-type dogs lived in the arctic regions, such as Iceland and Lapland. That explains the thick double coat that all Pomeranians boast today.

They were also closely related to wolves since all Spitz breeds have wolf-like characteristics. That’s why Pomeranians have such a big personality and a fierce attitude.

The Pomeranian breed, as you know it today, started its first steps in the Pomerania province near the Baltic Sea.

Early Pomeranians were nothing like the tiny dogs we know today and were quite big. However, breeders worked on reducing the size because they wanted a companion, not a working dog.

Still, the genes of the ancient Spitz dogs exist in Pomeranian’s bloodline and are passed down from generation to generation.

Sometimes the genes get thrown back to those early dogs. As such, throwback Pomeranians resemble the early Pomeranians and show us what the breed looked like before it was bred down to size.

A large Pomeranian doesn’t equal a throwback Pomeranian. For once, we have Pomeranians that simply enjoy eating and have put on some extra pounds. That happens more often than you think because Pomeranians are tiny, and it’s easy to overfeed them.

In addition to this, breeding a Pomeranian with another Spitz-type of dog might result in Pomeranian puppies that are bigger than the average ones. Nowadays, people are quite fond of mixing different dog breeds, and that explains why there are more than 20 Pomeranian mixes.

That means that not only the parents of a throwback Pomeranian should be 100% purebred but also all their relatives back to their great-great-great-great grandparents.

When you have a tiny dog such as a Pomeranian, you worry about them getting injured due to their size. Often a simple fall from a bed might be enough to cause a sprain or a break a bone. Moreover, Pomeranians sometimes suffer from pulled ligaments and damaged joints from leaping on and off the furniture.

In addition to this, there’s no indication that throwback Pomeranians have more health issues than the standard ones. In fact, their big size might reduce the chances of some conditions such as a collapsed trachea.

5. Throwback Pomeranians Are Excellent for Kids

If you’re thinking about getting an average Pomeranian for your child, you’ll often hear that these dogs aren’t suitable for homes with young children.

After all, most Pomeranians don’t weight more than 7 pounds, so they have to be handled carefully. Children, on the other hand, are often clumsy and can hurt such a tiny dog without meaning to by dropping them or stepping on them.

So, don’t be surprised if some breeders refuse to sell a Pomeranian puppy to a family with young kids.

However, throwback Pomeranians are at least 14 pounds, so they aren’t that fragile. They can handle children as long as the child knows how to behave around dogs. They’re your best choice if you love the Pomeranian breed but have a small and curious child at home.

Another interesting throwback Pomeranian fact is that these large Pomeranians are rare.

For once, breeders strive to breed a litter of Pomeranian puppies that matches the American Kennel Club’s breeding standard.

Some unprofessional breeders indeed try to create smaller than usual Poms to satisfy the demand for teacup Pomeranians. However, most breeders frown upon that practice and aren’t interested in producing Pomeranians that are smaller or larger than the standard.

Furthermore, it’s impossible to predict when a throwback Pomeranian would occur because this gene throwback is completely random.

Even if you match a female and male Pomeranian that have produced a throwback Pom, there is no guarantee that another throwback Pomeranian would be born. That makes breeding this type of dog almost impossible.

If you’re interested in obtaining a throwback Pomeranian puppy, your best bet would be to contact breeders. Ask them to include you in a list for larger-than-expected puppies.

However, you should know that these puppies might not be fully throwbacks. That’s because it’s hard to estimate how large a puppy will grow out to be. So, you might end up with a partial throwback Pomeranian.

A throwback Pomeranian might have a personality close to that of their ancestors. In other words, these large Pomeranians might have a high prey drive and chase after cats and other small animals.

The last throwback Pomeranian fact that I’m going to share with you is one of the disadvantages of owning a throwback Pom. You can’t take part in dog shows.

The ideal weight for a show Pomeranian is between 4-6 pounds, and most throwback Poms are twice or thrice that weight. So, a throwback Pomeranian won’t be allowed on the stage, unfortunately.

If you’re hoping to show off your Pomeranian puppy, you’ll have to get one that matches the American Kennel Club’s standard.

Throwback Pomeranians can be quite the sight, and they often astonish with their size and larger than life personality. They give us a glimpse into how early Pomeranians used to look like and why people fell in love with this breed so much.

This website uses cookies to improve your experience while you navigate through the website. Out of these, the cookies that are categorized as necessary are stored on your browser as they are essential for the working of basic functionalities of the website. We also use third-party cookies that help us analyze and understand how you use this website. These cookies will be stored in your browser only with your consent. You also have the option to opt-out of these cookies. But opting out of some of these cookies may affect your browsing experience.
Necessary Always Enabled

Any cookies that may not be particularly necessary for the website to function and is used specifically to collect user personal data via analytics, ads, other embedded contents are termed as non-necessary cookies. It is mandatory to procure user consent prior to running these cookies on your website.