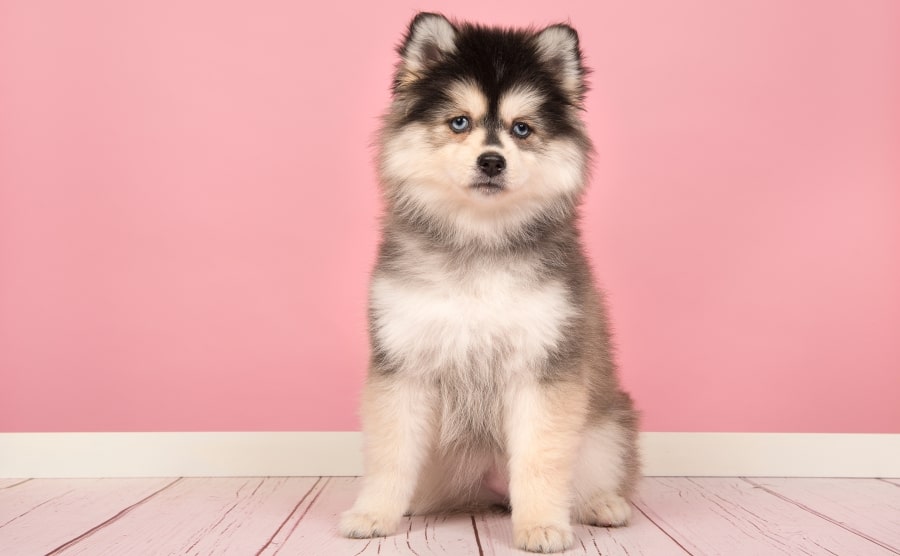 Are you wondering which the most popular Pomeranian mixes in the world are? Pomeranians are so cute that you can’t help but think about what will happen if you mix them with another breed.

Cross-breeding is a topic of heated discussions among the breeders’ community. While not all endorse this practice, the popularity of designer breeds has been steadily rising in recent years. That’s why you can find more than 45 Pomeranian mixes.

Have you ever wanted to have a Husky but never had space for a big dog? Then you’ll fall in love with this mix between Pomeranian and Husky called Pomsky.

Pomsky has the striking looks of their Husky parent and the affectionate and loyal personality of the Pomeranian. These cuties come in a variety of colors and patterns depending on the stronger gene and weigh between 15-30 pounds.

Their small size and sweet disposition make Pomsky perfect for apartment dwellers and families with kids and other pets.

However, they’re quite pricey since breeders use artificial insemination to breed them.

Both Bichon Frise and Pomeranians are companion dogs with affectionate temperament. So, it’s logical that their offspring will have the same loving and sweet disposition.

Bichon-A-Ranian, as some call them, are a relatively new designer breed. But these dogs are gaining popularity due to their cute looks, compact size, and friendly temperament.

While the Bichon Frise is always white, the Bichon-A-Ranian comes in a mixture of colors and might have a straight or curly coat.

These mixed Pomeranian dogs weigh between 7-15 pounds, so they’re the perfect size if you’re looking for a lap dog.

Beagles are one of the most popular small dog breeds due to their playful nature and friendly disposition. When you mix them with Pomeranians, you get an incredibly affectionate dog who’ll bond strongly with you.

Pomeagles can have a Beagle’s smooth coat or the fluffy look of their Pomeranian parents. They weigh between 6-25 pounds, which makes them perfect for apartments as long as you meet their daily exercise needs.

Some Pomeagles have the prey drive of Beagles, so they might not get along well with other non-canine pets if they haven’t been socialized properly. They’re also prone to separation anxiety.

The next pooch in our list of the most popular Pomeranian mixes is called Shiranian, or Pom-Tzu. This Pomeranian mix takes the best from both breeds, so you end up with a devoted, sensitive, and loyal companion.

Shiranians are eager to please, highly trainable, and intelligent. But they can also be jealous when you pay somebody else too much attention and are prone to separation anxiety.

Depending on the dominating parent, a Shirarian might have a curly or straight coat in a variety of colors. They weigh between 4-15 lbs and are much more energetic than you expect from such a small dog.

When you consider how famous Pomeranians and Chihuahuas are, it’s not possible to miss Pomchi in our list of the most popular Pomeranian mixes.

Pomchis are playful, smart, and resourceful. These cuties love to be the center of attention and will follow you around the house, demanding to be part of the action. Despite their small size, Pomchis have a big personality, a lot of spunk, and make excellent watchdogs.

However, Pomchis tend to be yappy and bond closely with their chosen human. They can still be affectionate with the rest of the family, but it’s clear that they have a favorite.

One of the reasons why Cockeranians are among the most popular Pomeranian mixes is their soulful, irresistible puppy eyes and their silky coats.

As a whole, Cockeranians take the best from Pomeranians and Cocker Spaniels and make excellent companion dogs for families with older children. They’re devoted to their owners, eager to please, and affectionate.

Since Cocker Spaniels are hunting dogs, Cockeranians tend to have more energy than your typical small dog. So, they can be quite mischievous and destructive when you don’t burn off their excessive energy.

Most Dameranians take the Dachshund’s muzzle and nose as well as the Dachshund’s slender body. Depending on the dominating parent, they might be as small as 8 pounds or as big as 25 pounds.

Usually, Dameranians bond closely with a single person and love nothing more than to spend the day cuddling in a lap or being their owners’ shadow. They hate to be alone and feel miserable when separated for long from their human.

This popular Pomeranian mix takes the intelligence of the toy Poodle and the big personality of the Pomeranian. As a result, Pomapoo is smart, bold, and affectionate.

Pomapoos are rarely shy or aggressive. However, they might be a bit reserved around strangers if they inherit more of their Pomeranian parents. They have low to moderate exercise needs and a daily walk is sufficient to keep them fit.

While Pomapoos get on well with children, these pooches are tiny and fragile and can get easily hurt. So, they’re best suited for families with older kids.

Since Pomeranian and Maltese are small dog breeds, Maltipom puppies don’t grow very big and are between 3 and 9 pounds. But what they lack in size, they make up for in personality.

Just like their parents, most Maltipoms thrive in a human company and love nothing more than to snuggle in someone’s lap. While they’re smart and easy to train, they will try to boss an inexperienced owner and set their own rules.

Intelligent, fluffy, and affectionate, it’s no wonder that this Pomeranian mix has gained popularity in recent years.

The Yoranian or Pom Terrier is among the most popular Pomeranian mixes due to their lush coats, charming faces, and loving personalities. Despite their small size of 3-7 lbs, Yoranians are bold, alert, and protective so that they won’t back off when challenged.

As a whole, Yoranians are excellent companion dogs and hate being away from their humans for long. However, they might have a stubborn streak since both Yorkshire Terriers and Pomeranians have an independent spirit.

Pomeranians and Pugs are so different in appearance that it’s hard to predict how their puppies will look like. Some Pom-A-Pugs take the flat, round face of a Pug, while others – the fox face of a Pomeranian. Coats and colors also vary greatly in this Pomeranian mix.

But no matter how the Pom-A-Pug looks like, these pooches are smart, devoted, and playful. They get on well with everybody in the family and love it when people spoil them.

Pekingese used to be companion dogs to the Chinese Emperors, and they still remember it. Pomeranians also used to be royal companions. So, when you mix these two breeds, you get a dog with a big personality, lots of charms, and an independent spirit.

Peek-A-Poms are typical companion dogs, but they take their role as a protector of the house and family very seriously. They love attention and won’t ever refuse cuddles or belly scratches.