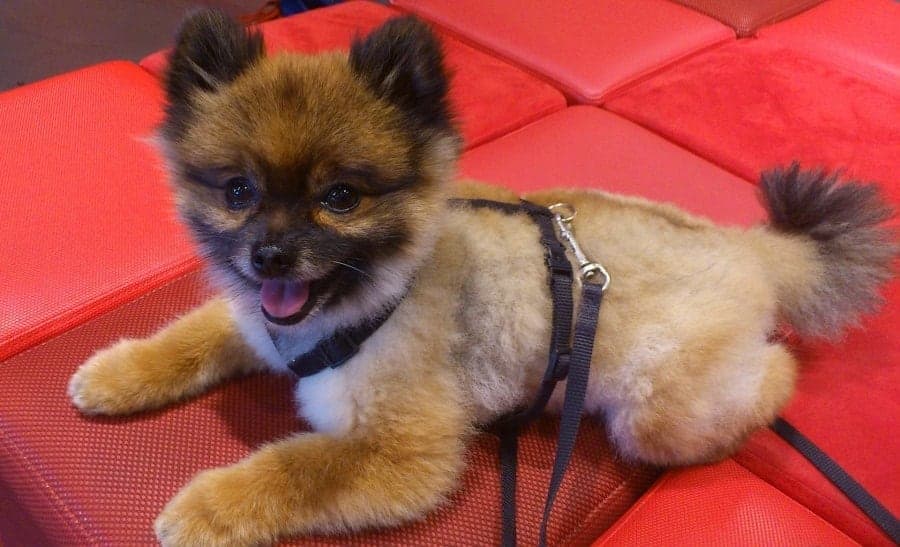 So how are Pomeranians with babies and small children? Pomeranians are very friendly and social dogs to all types of people including children and babies. Since a Pomeranian is fairly fragile, it’s important that children know not to be overly aggressive with them. It’s advised to not leave young children and Pomeranians alone without adult supervision.

Knowing that our Pomeranians can play and have fun with children is great because they can take a more active part in our family’s life. However, there’s much more to know about Pomeranians and small children. Read on to discover everything you need to know.

How Pomeranians Are with Small Children

Pomeranians are one of the most joyous, playful, charismatic dogs in the world. The combination of their puffy cuteness and standout character is unmatched in most dogs. How often do you catch your Pomeranian spinning, running around, smiling, and, of course, barking? Most likely often enough to not notice it as much anymore.

Small children and Pomeranians are a good match. While there are issues to consider, overall they’re an excellent combination. As a matter of fact, in almost every case small children are at a strength advantage to most Pomeranians, so it’s less likely, compared with larger dogs, that the dog will actually inflict any harm whenever they rough around.

While Pomeranians are one of the most social dogs out there, they do have their moments of caution and defense. We know that our Pomeranians have a bit of a complex around bigger dogs and strangers in general, so it’s important to realize this could affect the way our Pomeranians interact with small children.

For example, let’s say your Pomeranian is with a small child and your Pomeranian feels a little threatened. But this doesn’t stop the small child from being inquisitive and playful with your Pomeranian. If the child threatens the Pomeranian to a point where they don’t feel comfortable, there is a chance that they may lash out. This is absolutely possible and can be easily avoided by always keeping an eye on your Pomeranian and small children. Do not leave them alone ever.

It’s also important to realize that small children can easily be bigger and stronger than your average Pomeranian. This means that in the situation where a child wants to play with a Pomeranian and they’re enjoying each other’s company, it’s possible that the small child could fall or physically affect your Pomeranian in a negative way. We all know Pomeranians are resilient and can brush off a lot of things, so this is mainly to benefit your Pomeranian’s well being.

Overall, Pomeranians are small dogs that have the charisma of a lion but the body of a cat, so they’re excellent around children in the social sense, but could cause harm or be harmed in the physical sense. As mentioned before, it’s important to keep an eye on your Pomeranian and any small children they’re interacting with to be sure neither the children nor Pomeranian are acting out and cause each other any harm.

Pomeranians and small children often times have great relationships. The curiosity and happiness of a small child combined with the charisma and playfulness of a Pomeranian is an exciting combination. However, there are boundaries when it comes to this relationship. Pomeranians, while cuddly and cute, are also rather defensive if they begin to feel threatened.

As a parent, it’s best to educate your children on how to approach dogs in general, because it can turn out to be rather a bad situation if a dog feels like it’s being attacked. While there’s absolutely no excuse for a dog to be aggressive around a small child, the reality is that Pomeranians will defend themselves if they feel this way.

For example, if a small child is playing with a Pomeranian and suddenly hits the Pomeranian, most likely the Pomeranian won’t express themselves in an overly aggressive manner. However, if that same child continues such behavior, there’s no telling whether or not the Pomeranian will react with a bark, growl, or bite.

The main issue is small children don’t have the understanding of their strength to deal with a Pomeranian properly. If they both play with each other, there’s no telling how either of them will react. In reality, they’re both testing each other’s limits and being able to supervise this is probably the best solution.

For instance, there could be a situation where the small child is playing with the Pomeranian and falls on top of the Pomeranian. This might really hurt the Pomeranian due to their fragile frame. This could lead to health issues, including broken bones, knee problems, lung issues, and increased anxiety.

There’s also the situation where a small child is playing with a Pomeranian and for some reason the child riles up the Pomeranian. It’s possible that if the child doesn’t have the pre-warning of a growl or bark that the Pomeranian may snap at the child. I’ve seen this with my Pomeranians when they feel threatened and I know it occurs with other Pomeranians.

It’s important to not leave small children and Pomeranians alone with each other. They don’t understand each others’ boundaries well enough to respect them. I would say the only time I would allow any small child alone with a Pomeranian would be if I could speak to the child myself. This obviously leaves children three to four years old or lower out, so keep these ages in mind when confronted with a situation such as this.

But it’s easy to let the little guys and gals play with each other under parent supervision. In any case, it’s much more fun for everyone when surrounded by happy children and Pomeranians. Let them play and keep an eye on them!

The Best Age for Children to Play with Pomeranians

Like I mentioned before, Pomeranians and small children have similar physiques at certain stages of their lives and how they interact is very much dependent on this. While a Pomeranian can be bigger than an infant, they could be outsized when compared to a small child. This mismatch can cause issues on both sides.

I’ve seen my Pomeranians play with children of all ages and I believe that children of any age, including infants, can play with Pomeranians. The reason being is that Pomeranians are exciting, happy friends that are also tender when they need to be. They’re smart, so they’re likely aware that they may be interacting with someone less capable than an adult or another Pomeranian.

If I were to leave my Pomeranians and children alone with one another, I’d make sure that the oldest child knew the physical limits that a Pomeranian has. I would explain that it’s fine to play and rough house a bit while being careful not to fall on top of them. This means no tackling, wrestling, or anything like that. It also means making sure the oldest child is at least three to four years old.

The problem is Pomeranians are like little stuffed toys that just so happen to be alive. They’re so much fun to play with, so everyone wants to be around them. But their cuteness can’t protect them or children they play with, so the best policy when letting small children and Pomeranians to play with one another is to keep an eye on them.

Are Pomeranians good for families? Pomeranians are excellent family members. They are very social, extrovert pets that can bring a lot of light to one’s family and they’re extremely loyal to their pet owners.

Are Pomeranians really aggressive? Pomeranians are only aggressive when they feel threatened, so overall they are not. While they are more vocal than other dogs, they are mostly happy, friendly dogs. Don’t let their over charismatic nature be seen as aggressiveness.

Are Pomeranians easy to train? While Pomeranians are very smart dogs, they are rather difficult to train due to their stubborn, individual mindset. Like other dogs, they can definitely be potty trained and taught not to beg for food. Asking them to do tricks will be difficult.