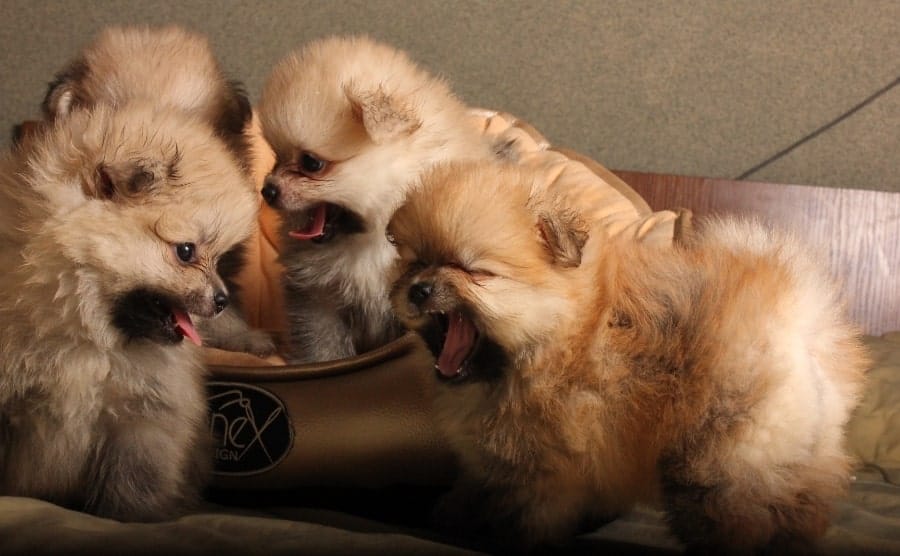 Are there different types of Pomeranians? You might think so you’ve seen some adorable pictures of Pomeranians that look nothing alike. After all, some breeds have standard, toy, and miniature representatives.

So, let’s take a look at these different types of Pomeranians and learn some exciting Pomeranian facts.

The American Kennel Club’s breeding standard is quite clear when it comes to Pomeranians and how they should look. Fox-like or “normal” Pomeranians are those that fit that standard.

According to this breeding standard, Pomeranians should have a round skull, small, erect ears, deep, almond-shaped eyes, and a heavily plumed tail that lies on the back. The body should be square with a height to length ratio of 1 to 1.

The coat should have two layers – a short, dense undercoat and an overcoat of long, guard hairs. While all coat colors, patterns, and variations are acceptable, eyes should be dark with black eye rims expect in self-colored Poms.

The standard specifies that the Pomeranian’s muzzle length should be 1/3 to 2/3 of the length of the skull and that their expression should be alert and intelligent. That’s what gives the Pomeranian’s face their fox-like appearance.

While breeders have adhered to the Pomeranian breeder standard for ages, teddy bear Pomeranians have risen in popularity in recent years. That’s why some breeders have focused on breeding Poms that look like miniature teddy bears.

But what’s the main difference between a fox-like Pomeranian and a teddy bear one? It’s the length of the muzzle.

As such, teddy bear Poms have a shorter muzzle than standard Pomeranians. Their eyes are also closer to the nose, the cheeks – fuller, and the body – shorter.

While these Pomeranians are very cute, the teddy bear face comes with a cost. Most of these Poms will have the same issues that brachycephalic breeds have (Pugs, Pekingese, Shih Tzu, for example). That’s because your Pom’s facial structures have to fit in a smaller than the usual space.

Such Pomeranians might have breathing difficulties due to pinched nostrils and an elongated palate that blocks parts of the trachea.

The compact body also increases your Pom’s chances of joint and bone-related problems, such as patella luxation or hip dysplasia. Most small dog breeds are prone to such conditions, including Pomeranians.

Probably the worst possible outcome is a brain too big to fit the skull. That leads to excruciating pain and might paralyze your Pomeranian if the brain presses upon the spinal cord.

The next type of Pomeranian we’re going to discuss is the baby doll.  Baby doll Pomeranians are in the middle between fox-like and teddy bear ones. In other words, their muzzle is short but not short enough, and they have baby-like features.

However, you have to keep in mind that these are unofficial facial differences. As such, breeders don’t always agree about which Pomeranian is a baby doll and which a teddy bear. Some also use the two “terms” interchangeably.

Moreover, when Pomeranian puppies are young, it’s hard to tell how long their muzzle is going to be. You might get a baby doll Pomeranian and end up with a teddy bear or fox-like one.

What’s important to remember is the American Kennel Club doesn’t accept Pomeranians with shorter muzzles than the standard. That doesn’t matter much if you’re looking for a pet, but it matters for the show ring.

Another type of Pomeranian is the so-called mini or teacup Pom. These are Poms that weigh less than 3 pounds and are visibly smaller than the average Pom.

The popularity of dogs that look like stuffed toys has steadily risen in recent years. However, respectable breeds frown upon the practice of deliberately breeding two smaller than the breeding standard Poms to produce teacup or mini Pomeranians.

Moreover, Pomeranians are already small enough. Their tiny size makes them prone to injuries even from a simple jump. So, reducing the Pomeranian’s size ever further doesn’t improve the breed, especially since the practice involves inbreeding.

Of course, sometimes breeders might refer to a runt of the litter Pomeranian as mini or teacup. These puppies might be little under the breed’s standard of 3-4 pounds. Usually, that’s a marketing strategy to attract buyers.

You should know that such small Pomeranians have a higher risk of health problems. Moreover, they won’t be accepted in the show ring.

When you look at your cute Pomeranian puppy, you’d be hard to believe that Pomeranians used to be much bigger.

Your Pomeranian’s ancestors were medium to large Spitz dogs that lived in the Arctic and used to pull sleds. These dogs weighed around 30-40 pounds and were strong and muscular with a thick, double coat to protect them from the elements.

As you can see, Pomeranians still have that magnificent coat, but they were bred down in size because people wanted a tiny, companion dog.

However, genes have a funny way of working and might get thrown back from the time of that ancient Spitz breed. When that happens, a female Pom gives birth to a puppy that’s much larger than the average Pomeranian.

But let’s make one thing clear. Not all big Pomeranians are throwback Pomeranians. Some are mixed breeds, while others look like Pomeranian, but aren’t.

So, throwback Pomeranians should weigh at least 14 pounds without being obese or overweight, and there should be no mixes in the bloodline for at least five generations on either side.

Other Spitz breeds such as Keeshond, Japanese Spitz, the American Eskimo Dog also look very much like Pomeranians. However, they are bigger and might get mistaken for a throwback Pomeranian.

The last Pomeranian type is the most interesting because we’re going to talk about mixes.

Designer breeds, as people call when you cross two dogs from different breeds, are a controversial topic. Respectable breeders don’t accept them because these mixed dogs don’t strengthen the bloodline or improve the breed.

Mixed Pomeranians take features of both breeds and might have quite a unique appearance. But that’s what makes them so popular and desired.

Believe it or not, more than 30 Pomeranian mixes exist. Some of the most popular ones are:

So, if you’re wondering why your Pomeranian looks so much like one of these breeds, they might actually be a mixed dog. Unfortunately, you can’t tell how purebred your Pomeranian is without a DNA test.

While there’s only one official Pomeranian type, due to coat color, facial structure, and size, some Pomeranians look very different from one another. Grooming techniques can also alter your Pom’s appearance and make them stand among the crowd.