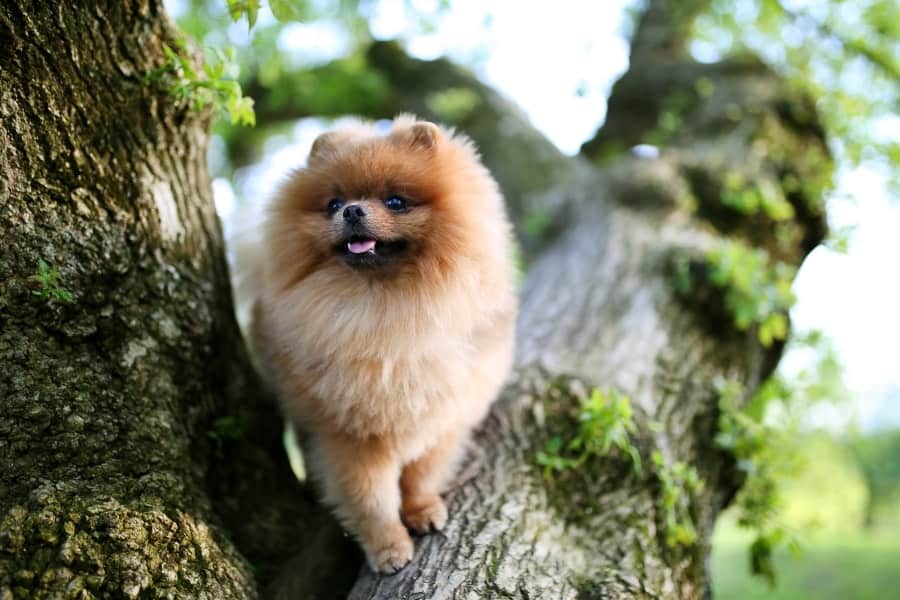 Let’s face it, we can’t be at home with our Pomeranians 100% of the time, even though we may want to. It’s also not always possible to bring them along to wherever we’re going. That’s why it’s important to ask the question: “How long can Pomeranians be left alone?” Well, Pomeranians are certainly social pups, but you’d be surprised the level of solitude some of them can undertake.

How Long Pomeranians Can Be Left Alone

Pomeranians are the most social dogs I’ve ever owned, so it can be tough to gauge how well they’d do when left home alone. Depending on the age of your Pomeranian, you’ll definitely want to consider holding off on leaving them alone for extended periods of time. Going to the store or the post office is totally fine, but going to work all day might be an issue in the early stages.

The following table should help guide your decision of how long can your Pomeranian be left alone for based on their age under the condition they have no anxiety issues:

When your Pomeranian is just starting out in their newborn stage, the main concern should be to not leave them alone for too long. Anything more than one hour is far too long because your Pomeranian hasn’t had the time to learn to hold their bladder. Apart from their lack of potty training, they may have other issues maneuvering the world which only you can help them with.

Once your Pomeranian breaks free from their newborn weeks and reaches the age of a couple of months, you can stretch out the time they have alone to two hours. Not only is that sufficient amount of time before they might need to use the bathroom, but it also gives them the opportunity to gain some independence and learn about their surroundings.

At the point your Pomeranian approaches adulthood, you might not even need to leave them alone on purpose since they’ll probably become slightly more independent. A maximum of four hours of being left alone is certainly fine and could even be longer depending on their level of potty training and temperament.

Having reached the ripe age of adulthood, you’ll be able to leave your Pomeranian alone all by themselves for 6-8 hours without any issues. At this point, your Pomeranian should be well aware of where and when to use the bathroom and should have a good feeling for being alone and independent when necessary.

Now, it might be the case that you have no choice on the matter of leaving your Pomeranian alone for over eight hours, which does bring up a challenge you and your Pomeranian will have to face. Thankfully, Pomeranians are some of the smartest and fastest learning dogs out there, so even if your Pomeranian has an issue being left alone, it can be solved through proper training.

When training your Pomeranian to be left alone for an extended period of time (maximum 10 hours), the most important aspects to consider is are they able to handle it emotionally and do they have the right equipment for the job. Being able to ease them into it using simple and consistent routines is the best way to set up a safe and calm environment. You also want to make sure they have the essential items they’ll need to get through this period of time.

Some simple and effective ways on how best to leave your Pomeranian alone include:

For Pomeranians with separation anxiety, it’s much more difficult to leave your home for extended periods of time. Your Pomeranian may get overly excited seeing you get ready to leave, only to discover they’re not coming with you and enter a state of hyperactivity or depression. This is no way for your Pomeranian to live, which is why it should be addressed early on.

This is why Pomeranian puppies should be given the opportunity to be left alone for safe periods of time as discussed earlier. This is crucial because it instills in your Pomeranian the idea that you won’t always be around, so they should feel secure in their own right without their parent around.

Of course, it’s not always the case that we’re able to train our Pomeranians from such a young age, which is why training them to be independent is so important. Luckily, Pomeranians are quick learners and are able to retain knowledge very effectively. By following through with simple routines before and after leaving your home, you can train your Pomeranian to be left alone while curing them of their separation anxiety.

If your Pomeranian has separation anxiety, you want to make sure they’re not left alone for the same amount of time as described previously. You also must follow through with a simple but effective routine before you leave your home so that your Pomeranian is able to understand over time when you’re going to leave and that you’ll be back.

How to Calm a Hyper Pomeranian

Whether your Pomeranian gets super excited before you leave your home, after you leave, or both, sometimes it’s necessary to get them to calm down. Pomeranians in hyperactive states can be some of the most fun times imaginable, but there are certainly moments when they need to relax.

If your hyper Pomeranian needs to calm down, the first step you can take is to separate them from the environment in which they became hyper. By removing them from this environment and transporting them to a safe, isolated location for a short time, they’ll have the right amount of space and time to calm down.

While the most important action to take is to put them in a calm environment ideally alone, there are also effective products that can help calm your hyper Pomeranian. Through the use of dog pheromone diffusers, dog anxiety jackets, and calming treats, you can speed up your Pomeranian’s approach to calmness.

Using effective products can be extremely helpful if you’re on a mission to calm your hyper Pomeranian, but for some these solutions might be less effective. It might be the case that your Pomeranian needs to enter a behavioral training course, which I recommend all Pomeranian parents do regardless of their Pomeranian’s behavior.

By going through a good training course with your Pomeranian, you’ll not only instill in them the lessons they need to learn to be “good dogs”, but also you’ll be able to build a strong bond between the two of you. When leaving your Pomeranian alone for periods of time, your Pomeranian needs to trust you just as much as you need to trust them.