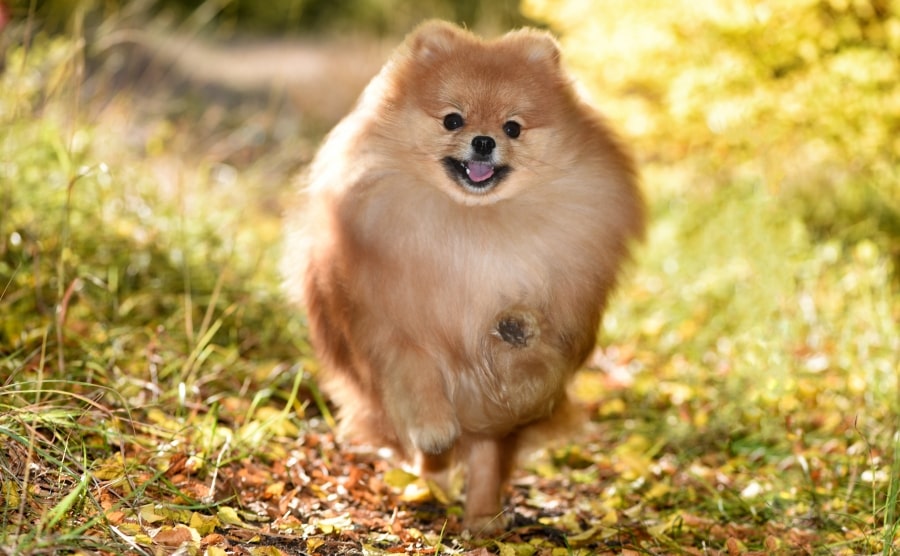 The biggest perk of being a Pomeranian owner is that they never stop to amuse you with their odd behavior. One such quirk is spinning in circles, which always brings a smile upon your face. But have you ever wondered if there’s a reason for this behavior?

So, why do Pomeranians spin in circles? It’s hard to say what goes in your Pomeranian’s mind when they do their Pomeranian pirouettes. It can be many things from excitement to stress to a medical condition. When and how your Pomeranian spins can help you narrow it down.

So, we’re going to see the seven most common reasons why your Pomeranian spins in circles. Keep on reading to unravel the mystery.

7 Reasons Why Your Pomeranian Spins in Circles

1. Your Pomeranian Is Making a “Nest”

Have you ever noticed that your Pomeranian spins three times before lying down to sleep? It often looks as if your Pom is performing some ancient ritual that’s not meant for humans to understand.

However, this odd spinning has a logical explanation. In the wild, dogs often have to trample grass and bushes to make a comfortable nest.

Spinning in circles also ensures that whatever bugs or insects hide in the grass will scatter. No one likes to sleep on twigs and stones and be bitten by bugs or snakes, after all.

It might seem strange to you that your Pomeranian still feels the need to do that when they have such a comfortable bed. But it’s a hard-wired into your Pomeranian that they should have a safe spot to sleep where predators won’t notice them.

Supporting this theory is an experiment performed by the dog behaviorist Stanley Coren. During the test, dogs placed on soft, uneven surfaces were three times more likely to spin at least once before they would lie down.

Moreover, spinning to make a nest leaves a mark that this territory has been claimed so that no other wild dogs will attempt to sleep there.

2. Your Pomeranian Is Checking the Perimeter

Does your Pomeranian spin around before they get down to doing their business? Then your Pomeranian is probably checking the perimeter because they feel vulnerable and exposed.

Spinning in circles allows your Pomeranian to have a good look around and spot or smell any potential predators. So, metaphorically speaking, your Pom doesn’t want to be caught with their pants down.

All you can do is wait until your Pomeranian feels comfortable and safe enough to do their business. Don’t try to rush your Pomeranian, or they might develop negative emotions towards potty training. That could make housebreaking your Pom hard.

3. Your Pomeranian Is Happy to See You

Let me tell you something about Pomeranians. They’re companions and lapdogs. They’re not interested in following scents or guarding the house against intruders. Pomeranians want to be close to their humans and are miserable when left alone for long hours.

Since your Pomeranian can’t tell you with words how much they love you, they show their affection in other strange and usual ways.

Some Pomeranians tend to lick you until your face is sore by all their slobber kisses. Others follow you around the house like a shadow and observe everything you do with a morbid curiosity.

Of course, we also have those Pomeranians that spin around like crazy the moment you walk through the door.

It doesn’t matter how long you’ve been gone. For your Pomeranian, even a couple of minutes feel like ages. So, when you get back, they’re so happy that the only way to express is to spin in circles.

Think about it as your Pomeranian saying, “You’re back! I’ve missed you so much, and I love you!”

Pomeranians are dogs that need a lot of attention from their owners. They aren’t happy if you ignore them for too long or pay too much attention to other people/pets.

Some Pomeranians communicate how neglected they feel by barking, whining, or misbehaving. These are easy to recognize signs that you haven’t met your Pomeranian’s emotional or physical needs.

Moreover, this tactic is probably working pretty well for your Pomeranian. After all, it’s impossible to concentrate on your work whenever your Pomeranian’s making pirouettes at home. You have to get up, pet your Pomeranian, and tell them how silly they’re acting.

If you don’t want your Pomeranian to continue to distract you in this cute way, you should spend more quality time with them. Go for a walk or play a game together. Sometimes placing your Pom in your lap might also be enough.

5. Your Pomeranian Is Excited

Do you know that feeling when you’re so excited that you think you’ll burst if you don’t move?

Your Pomeranian might be going through the same emotions. When it’s time for walks, play, or training, your Pomeranian might start to spin in circles in anticipation of what’s coming. They know they’re about to spend some quality time with you and can’t wait for it.

In addition to this, your Pomeranian might get excited when you bring out the treats. Who doesn’t like it when they’re rewarded for being a good boy?

At times, your Pomeranian might get so excited that they might urinate from excitement. So, you might wait for your Pom to calm down before your pick them up.

6. Your Pomeranian Is Playing

If you think back to your childhood, you’d remember times when you’ve spun in circles for the pure joy of doing it. We’ve all done it at one point or another of our childhood.

Pomeranians aren’t that different from a small child. They have the same emotional intelligence as a two-year-old, so it’s not that strange that they engage in the same activities.

So, sometimes when your Pomeranian spins in circles, they’re playing by themselves, and they like how spinning makes them feel. So, you should let them enjoy the experience and don’t worry about it.

7. Your Pomeranian Is Sick

Let me reassure you first. Pomeranians love to spin in circles, so in most cases, you don’t have to panic that your Pomeranian is sick. But you should know that spinning in circles might indicate a medical condition.

First, Pomeranian might have a compulsive disorder. A big change in the routine, fireworks, traumatic experience – all these might cause your Pomeranian to engage in repetitive actions. Think about it as similar to the human habit of biting nails bloody to relieve tension.

Besides compulsive behavior, problems with your Pomeranian’s vestibular system, for example, the inner ear, might make them spin in circles.

In these cases, you’ll notice that your Pomeranian’s head is tilting to the side or that their eyes are twitching. Frequent vomiting is also a possible sign of vestibular issues.

Old Pomeranians might also develop cognitive disorders, such as dementia or Alzheimer’s. Anxious, repetitive, or strange behavior are frequent symptoms of such conditions. Brain tumors, liver disease, or Cushing’s might also manifest with obsessive spinning.

So, if your Pomeranian seems disoriented when spinning and there are changes in their appetite, activity levels, and gait, you should speak to your vet.

Why Pomeranians love to spin in circles is an interesting question with many answers. In most cases, it’s normal Pomeranian behavior and an expression of how your Pom feels at that moment. But you might want to check it out if your Pomeranian seems “strange.”