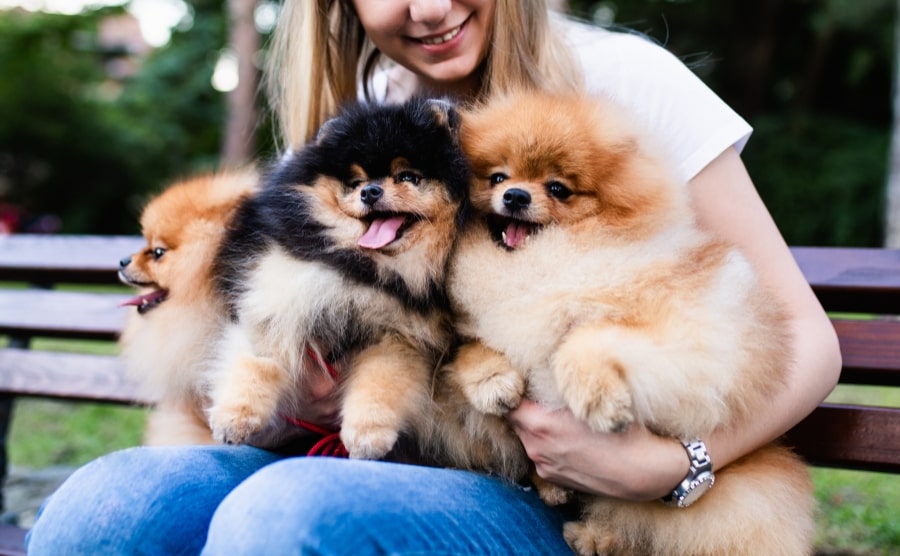 When you’re thinking about getting a Pomeranian, you probably have tons of questions about how to care for them. One of the most pressing ones is probably how much attention Pomeranians need so that you can judge if they will be a good match for your lifestyle.

So, do Pomeranians need a lot of attention? All dogs need attention, and Pomeranians aren’t different. Since they’re companion dogs, Pomeranians prefer to be close to their owners and can be needy at times. Moreover, Pomeranians require a lot of grooming to maintain their magnificent fluff.

So, how can you tell if your Pomeranian needs more attention, and how long can you leave your Pom alone? Keep on reading to find the answers.

How Much Attention Do Pomeranians Need?

I’ve heard a lot of people asking how much time they should spend with their Pomeranian. Understandably, you want to make sure that your Pomeranian doesn’t feel neglected or ignored.

Unfortunately, giving a definite answer is difficult. That’s because how much attention your Pomeranian needs depends on several factors, the most important ones being age and temperament.

You have to feed your Pomeranian puppy, groom them, and take them to their potty spot every 2-3 hours. In a way, it’s similar to caring for a baby.

So, your Pomeranian puppy will need a lot of attention until they mature, and you’ve successfully housetrained them.

On The other hand, adult Pomeranians aren’t among the most energetic dogs. Still, they need at least two 20-minute walks a day at a brisk pace. Don’t think that their small size means you can skip exercising your Pom.

Moreover, you have to brush your Pomeranian daily, or their fur will start to mat and tangle and cause your Pomeranian discomfort. Brushing your Pom’s teeth at least thrice a week, trimming their nails, and bathing them occasionally should also be part of your Pom’s routine.

As such, your Pomeranian will require at least 1-2 hours of your time every day for grooming, feeding, and exercise. That’s the minimum to meet your Pomeranian’s basic physical needs.

Besides, you also have to consider your Pomeranian’s emotional needs. Since breeders created Pomeranians to be companion dogs, most Poms don’t like to be separated from their owners for long. They prefer to stick close to you and keep an eye on what you’re doing.

Of course, it all depends on your Pom’s individual personality and temperament. But most Pomeranians want to play and cuddle with their owners as much as possible and can be quite demanding when they feel neglected.

So, don’t expect that your Pom won’t pester you for attention after you’ve fed, walked, and groomed them.

They will demand to be petted or cuddle and won’t take no for an answer. No Pomeranian will be happy if you don’t spend enough quality time with them or if you ignore them too much.

Keep in mind that Pomeranians have a long lifespan of about 15 years. If you can’t commit to meeting their emotional and physical needs, you might have to consider another dog breed.

How Long Can You Leave a Pomeranian Alone?

Besides wondering if Pomeranian needs a lot of attention, you probably want to know how much time your Pom can spend alone. Well, that depends on your Pom’s age.

Young Pomeranian puppies should be alone for no more than an hour because they can’t control their bladders for long. You need to take them every 1-2 hours to their potty spot to teach them the appropriate place to relieve themselves.

Once your Pomeranian matures, you can leave them alone for about eight hours provided that your Pom has enough toys to keep them entertained.

Moreover, you have to make sure that your Pomeranian can’t get into trouble by escaping their playpen and that they can reach their food and water bowls.

Pomeranians are social dogs, and they thrive when they have company. So, even though you can leave them alone for about eight hours, it doesn’t mean that your Pomeranian will be happy about it. Think about how you’d feel if you’re all alone during the day, and you can’t talk to anybody.

Keep in mind that companion dogs, such as Pomeranians, often develop separation anxiety. It happens when your Pom bonds so tightly to you that they can’t function when you’re not around.

Unfortunately, owners often think that they’re Pomeranian is acting out when they’re in distress and need help to overcome it.

What happens is that your Pomeranian is so anxious when you’re gone that they use destructive behavior, barking, whining, and pacing to relieve the stress. You might not even realize that something is wrong until your neighbors complain of all the noise.

As such, you might think about adding a second dog to keep your Pomeranian’s company and prevent separation anxiety. Another option would be to come home during your lunch break to see what your Pomeranian is doing.

As I already mentioned, Pomeranians love to be around people, so you’ll have to make up for your absence. If you don’t, you might notice these five signs that your Pomeranian needs more attention.

You should provide enough physical and mental stimulation so that your Pomeranian isn’t a bouncing ball of energy that destroys everything in its path.

Besides making a mess, your Pomeranian might act out while you’re at the house. They might refuse to obey your commands or test boundaries.

2. Your Pomeranian Is Clingy

Even when you leave your Pomeranian with all the possible comforts, they’re still going to miss having company.

So, if your Pomeranian doesn’t leave you alone for one moment when you come home, it’s a sign that they need some quality time with you. Some Pomeranians might sit at your feet or stare at you as an attempt to communicate their needs.

How would you feel if the person you love the most keeps ignoring you? You’ll probably get depressed. That’s what can happen to your Pomeranian when you neglect them for a couple of days.

You might notice that your Pomeranian sleeps more than usual or that they don’t have as much appetite as before. While these are also signs of an illness, they might appear whenever your Pomeranian is miserable and alone.

4. Your Pomeranian Has Gained Weight

Humans and dogs might be different, but sometimes they have the same coping techniques. I’m talking about stress-eating as a way to relieve anxiety and boredom.

Moreover, sometimes owners tend to overfeed their Pomeranians when they feel guilty about neglecting them.

5. Your Pomeranian Has Got Overgrown Toenails

Another sign that your Pomeranian needs more attention is overgrown toenails. For once, long nails show that you’ve been too busy to trim them, so you probably haven’t had much time for your Pom.

Moreover, Pomeranians wear their nails down when they walk on pavements. So, if you’re skipping on those daily walks, your Pomeranian nails will grow back before you know it.

Now you know that Pomeranians need a lot of attention and that they will be miserable when left alone for too long. You might provide your Pomeranian with the best toys and the most comfortable beds, but nothing can replace your presence. So, spend as much quality time with your Pomeranian as possible.