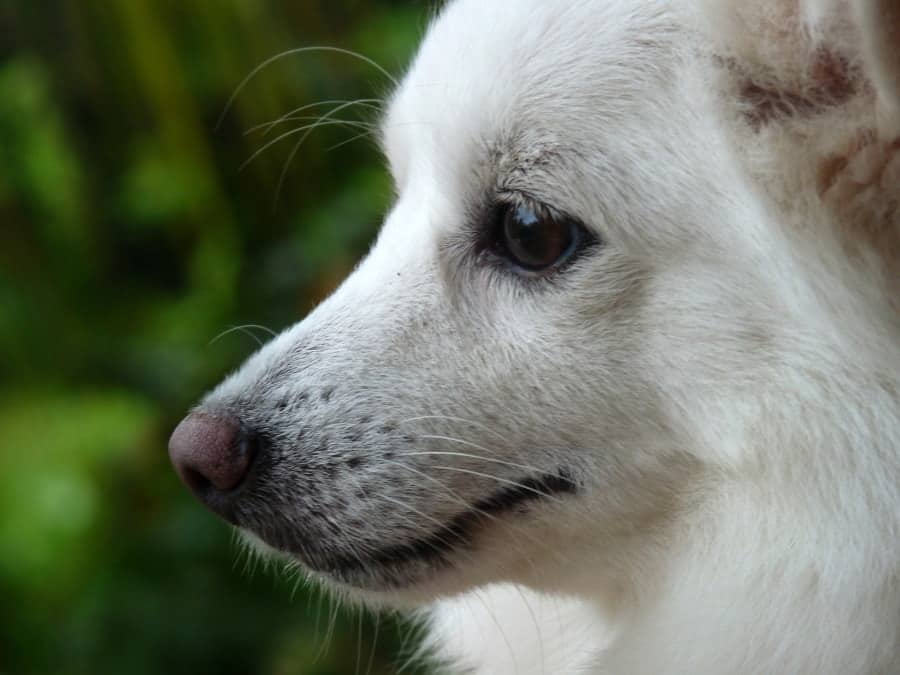 It seems that whenever I come home, even while walking up to the door, I can hear my Pomeranians barking and spinning around. By the time I get inside, it’s a full-on frenzy. This got me thinking about how best to calm down my Pomeranians, so I wanted to share what I learned with you.

Being able to calm a Pomeranian is definitely no small feat, but there are times that we need our Pomeranians to take a breather and relax. If you’ve ever experienced a time when you thought you just can’t take their hyperactive behavior anymore, you’ll most definitely want to read on.

How to Calm a Hyper Pomeranian

If you’ve ever owned a Pomeranian, you know how much energy and character they can have on a daily basis. A huge part of this behavior is that they love us so much and really want to protect us, which is probably their ancestral Arctic sled dog genes coming out to say hello. But sometimes it feels like they’re overly hyper, which can be a rather difficult situation if you have family and friends over or simply need a moment of calm to regenerate yourself.

We rescued our second Pomeranian, Elvis, from a shelter and knew full well that it would probably be one of the more difficult times of our dog-owning experiences, especially in terms of his behavior. The life he lived before us was a rather rough one, so we didn’t want to overextend his activities or interactions more than was comfortable for him. But there were still plenty of times when he’d bark and run around in a panic, so we just had to do something about it.

So I spoke with one of my local dog trainers, in particular, one that specialized in small breeds to get some advice on the most effective ways to calm down Elvis.

Arguably the most effective and inexpensive method is to simply put your Pomeranian in a safe, comfortable, familiar, and isolated environment where they can’t actually see anyone. A good place for Elvis is our bedroom. This works because they can no longer react to who’s around or what’s going on, and they’re in a room they know and feel safe inside.

If you do go the isolation route, I’d highly suggest playing some soft, relaxing music while they’re in there. Sometimes I heard Elvis periodically start barking and running around while in our bedroom, so I started to play some calming music inside and it worked! All I did was play sounds of running streams on repeat using my cell phone docking station.

Now that might help when you have guests over or simply need to lower the initial burst of excitement when you get home, but you can’t keep your Pomeranian cooped up in a separate room forever. No one wants that.

So I asked how I’d be able to keep the calm without throwing them into calm down jail and one answer was to use pheromone diffusers throughout the house. I tried out the ThunderEase Dog Calming Pheromone Diffuser Kit (link to read reviews on Amazon), which worked pretty well! Specific pheromones have a calming effect on dogs, just like certain pheromones trigger reactions in people, and using the right ones really helps. I tried using aroma diffusers as well, but the pheromones worked the best.

Apart from the pheromone diffuser, I’d definitely consider taking a look at the ThunderShirt Polo Dog Anxiety Jacket (link to read reviews on Amazon). Out of all the products I’ve purchased to help calm down my Pomeranians, this has been by far the most effective one.

Another strategy to calm a hyper Pomeranian is to make sure they get enough exercise each day. The reason this is important is that Pomeranians really do have a lot of energy, and that energy needs to be used on a daily basis. If it’s not, then there’s excess and they’ll behave in a hyperactive manner when you least want them to. Now whenever I have guests over or I suspect there’ll be some hyper-ness coming later in the day, I’ll take my Poms for a walk around the block.

While these methods work and are very cost-effective, long-term success will most likely be achieved by putting your Pomeranian through behavioral dog training. I suggest all Pom parents take their Pomeranians through dog training regardless of whether or not they show hyperactive behavior because it instills in them the proper way to act in everyday situations.

One of the most emblematic characteristics of Pomeranians worldwide is that they spin when being excited. For me, this is one of the cutest things ever and one of the things I love most about them. Notice next time with your Pomeranian how good they are at making eye contact the next time they spin!

Your Pomeranian is spinning a lot because they’re excited to see you and they love you. When they spin, they’re not scared, nervous, or filled with anxiety. They’re in a place of happiness and excitement, and they show that with each spin. This mostly happens when I get home, cook dinner, or say the word “walk” (we started spelling it out, but they learned that too!).

Pomeranians also like to spin to get your attention. I mean it’s really hard to miss a spinning puffy Pom, so they’re definitely winning the next attention seeking award if there is ever one. So cute!

Whenever my Poms are spinning with joy, I’ll almost always start playing with them, maybe increase the excitement so they get the attention they deserve, then go down to their level and start petting them. For my Pomeranians, this helps them calm down.

If you’ve ever left your Pomeranian home alone and you can hear them crying through the door, it’s likely they have separation anxiety. In my case, even when I leave the house and my kids are still at home, sometimes my kids tell me that some of our Pomeranians were just sitting at the door waiting for me to come home. While this is certainly adorable, it’s also not very healthy.

As a matter of fact, this is common behavior for dogs in general, which is good because it’s an issue that can be addressed for a large number of pets. This also means that it’s not all Pomeranians, even though the genes they have from their Arctic ancestors may play a role in this due to their highly protective and loyal nature.

If your Pomeranian has separation anxiety, I would definitely encourage you to speak with a dog trainer to see what they can do. While it’s not a huge issue when it comes to their overall health, it’s best that they detach from their people parents a bit to gain some independence and live their lives to the fullest.

As They Age, They Become Calm

Just like people, Pomeranians become calmer with age. While they still might bark, spin, run around, and just cause a little tornado of excitement, it’ll be far less often than when they were younger. As a matter of fact, once they hit their senior years, you should notice a difference in their overall behavior.

One of our Pomeranians, Rowdy, is rather old and is now the elder among the rest of our Pomeranians. His name is rather telling for how we used to behave some years back. But nowadays he’s much calmer and reserves his energy for other activities, like barking at birds or playing with his younger brothers and sisters.

Don’t get me wrong. Rowdy still has his moments of hyperactive behavior and excitement, especially when I come home. Maybe he’s a bit influenced by his siblings, but there’s no doubt he still gets his daily barks and spins in.

Are Pomeranians protective? Pomeranians are very protective dogs and will show it by barking at strangers, other animals, and noises. Pomeranians come from a lineage of Arctic working dogs called the Spitz, which is assumed to be a reason for this behavior.

How long can a Pomeranian be left alone? Pomeranians can be left alone as long as any other dog, which can be anywhere between 10 and 12 hours per day. This equates to about a full working day plus short outside activities.