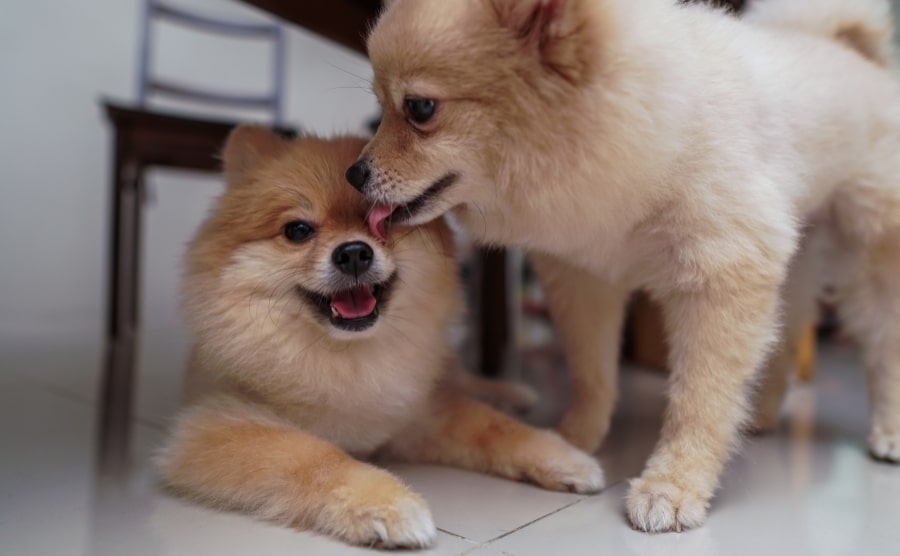 When you come home from work, there’s nothing more relaxing than your Pomeranian greeting you enthusiastically with a lick. However, sometimes your Pom might lick you so much that you start to wonder what’s happening and if you should be worried.

So, why do Pomeranians lick so much? Pomeranians are affectionate dogs and like to express their love for their owners. Licking is one way to do it because it’s a common endearment gesture in the dog world. However, Pomeranian, who lick themselves excessively, might have a health issue.

To help you understand why your Pomeranian lick so much, I’m going to discuss in detail the reasons for excessive licking in Pomeranians. Just keep on reading.

Why Do Pomeranians Lick So Much?

As I already mention, Pomeranians often lick you because they want to show how much they love you. After all, your Pomeranian can’t tell you how they feel or how much they’ve missed you while you’re gone. So, they use licking to express their feelings.

But affection isn’t the only possible reason why your Pomeranians is licking you so much. Let’s take a look at the others.

1. Your Pomeranian Is Showing Submission

If you’ve trained your Pomeranian well, they think of you as the leader of the pack. So, your Pom looks up to you when they don’t know how to react in a situation and trust you to make the right decision.

It’s normal for Pomeranians to show respect and submission to their leader by licking them. So, you should take it as a compliment.

Does your Pom lick you when you’re engaged deeply in some activity? Then your Pomeranian feels neglected and wants you to pay them attention.

Licking is a foolproof way to distract you from your job because it’s not something that you can ignore for very long, especially if your Pom is persistent.

The bad news is that licking for attention can turn into a habit. As such, you should teach your Pomeranian other appropriate ways to get you to notice them, unless you love to be licked to death, of course.

Another reason why Pomeranians lick people so much is that they think you like it. It doesn’t matter if it’s not true.

You might have rewarded your Pomeranian in some way when they’ve licked you. For example, you might have paid them more attention or given them treats to make them stop.

Poms are more likely to repeat a behavior when they get something from it. So, they’ll continue to shower you with their slobbery kisses to please you.

4. Your Pomeranian Likes How You Taste

Do you know that your skin has a salty taste? It might seem strange, but salt is appealing to some Pomeranians, and they can’t get enough of it.

Moreover, humans tend to put a lot of lotions on their faces. So, your Pomeranian might lick you so much because they like how your cream tastes.

However, since some creams and lotions contain artificial ingredients, you should be careful. Some of them might be toxic to your Pomeranian.

How to Train My Pomeranian to Stop Licking?

While you might enjoy your Pomeranian’s slobbery kisses, sometimes your Pomeranian overdoes it. Dogs have a rough tongue, and their licking isn’t always pleasant.

So, can you do something to make your Pom stop? Yes, you can! But first, you have to let your Pomeranian lick you as much as they want. Let me explain.

To train your Pomeranian not to lick, you have to teach them to do it on command:

Besides training your Pomeranian, you can ask your Pom for incompatible behavior. For example, when your Pom goes on a licking frenzy, you ask them to roll over or shake hands.

It’s also important that you don’t encourage your Pomeranian’s excessive licking. Don’t pay your Pom any attention when they’re licking and don’t use treats or other rewards to stop them.

Why My Pomeranian Is Licking Their Bodies So Much?

Sometimes owners notice that their Pomeranian is licking their paws or other body parts. Is this normal? Since Pomeranians aren’t cats, they don’t clean their bodies excessively.

Usually, excessive self-licking indicates that your Pomeranian is in discomfort. They’re washing the spot repeatedly because they’re trying to alleviate the itchiness.

One of the most common reasons for excessive licking in Pomeranians is allergens. The bad news is that your Pomeranian might be allergic to a lot of things.

Some common allergies include shampoo/conditioners, laundry detergent, chemicals, and food. So, you’ll have to consult your vet to determine the cause.

Fleas can also cause an allergic reaction since their bites tend to itch. It can be difficult to get rid of these nasty biters if you don’t wash beddings, vacuum carpets, and treat the whole house.

Fortunately, it’s easy to treat hypothyroidism with medication, so don’t worry about it affecting your Pom’s health too much.

How can joint problems lead to excessive licking? Whenever your Pom’s bones or joints hurt, your Pomeranian is going to lick or bite the painful spot to relieve the discomfort.

If you notice any changes in your Pom’s gait, you should bring them immediately to the vet. Pomeranians are prone to hip dysplasia, so you have to watch them.

You might have heard about compulsive and obsessive disorders in humans, but Pomeranians can also suffer from them.

In this case, your Pomeranian might have an uncontrollable desire to lick themselves. It can be so severe that sores would appear.

Obsessive and compulsive licking can’t be fixed at home. You have to work with your vet to heal any sores and prevent your Pomeranian from hurting themselves more.

Separation anxiety is a common disorder in breeds that bond closely to their owners, such as Pomeranians. Your cute Pom is a companion dog, and they will be miserable whenever they’re away from you.

Unfortunately, for some Pomeranians, your absence is equivalent to the end of the world. So, they whine, bark, or destroy everything in sight.

Sometimes Pomeranians use licking as a coping mechanism to relieve their anxiety and cope with your absence.

A lot of owners often think that they have a behavior problem when their Pomeranian starts acting out. However, separation anxiety is a serious condition, and your Pom is in actual distress.

Pomeranians live for the moments when they can shower their owners with love. That’s the main reason why Poms lick so much. However, excessive licking might be the result of a behavior problem or an illness. So, don’t ignore it if it worries you.