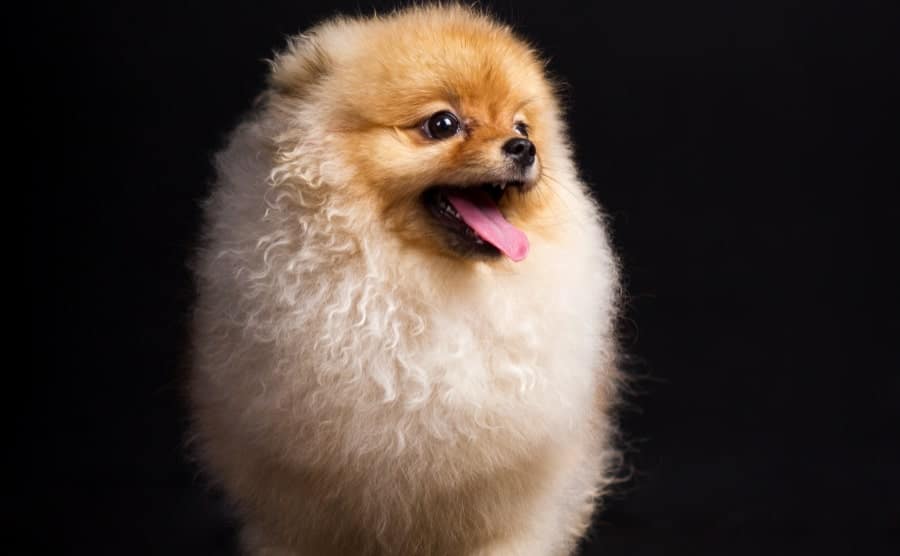 Pomeranians are one of the smallest dog breeds with weights between 3-7 pounds. However, some Pomeranians might be throwbacks and grow up to be far bigger than the tiny Poms you know. But you might not know how to big these dogs can be.

So, which Pomeranians are throwbacks, and how can you tell? Keep on reading to find the answers.

What Are Throwback Pomeranians?

To know what throwback Pomeranians are and why they exist, you have to know more about your Pom’s ancestors.

It’s hard to believe, but our tiny Pomeranians come from large Spitz dogs that used to full sleds through deep snow.

These ancient dogs were much bigger than Pomeranians we know today with a weight of 30-40 pounds. They were similar in appearance with a thick double coat and were just as alert, independent, and adaptable as your average tiny Pomeranian.

However, while those Spitz dogs used to work alongside humans, they preferred to stay outside with their pack. They were much more stubborn than your typical Pom and loved to chase small animals.

Breeders have worked for years on reducing the size of the early Pomeranians. But the genes of these “big” dogs are still present in the Pomeranian’s bloodline and are part of your Pom’s genetic makeup.

Usually, genes can skip a generation or two before they appear again. But when it comes to throwback Pomeranians, the genes get thrown back from these distant ancestors. That’s quite a leap.

When that happens, a standard female Pomeranian gives birth to a Pom puppy that is much larger than the rest of the litter and might have a temperament close to one of the early Pomeranians.

As you can imagine, such a gene throwback is rare and unpredictable. So there aren’t many genuine throwback Pomeranians. But they still exist and aren’t a hoax, as some people tend to think.

But not all big Pomeranians that you’ll come across are throwback ones. That’s something you have to keep in mind when someone claims that they have a throwback Pom.

While the American Kennel Club’s breeding standard calls from Pomeranians between 3-7 pounds, many Pomeranians weigh up to 10 pounds. These aren’t throwbacks.

In most cases, these Pomeranians have a sturdy bone structure that explains the extra weight. Poor breeding practices might also result in larger than average Pomeranians since amateur breeders don’t know what they’re doing.

Spitz dogs share similarities in their appearance because they were developed from the same ancient breed. It’s easy to confuse one of those dog breeds for a big Pomeranian or a throwback one.

How to Determine If Your Pomeranian Is a Throwback?

So, how can you tell if your big Pomeranian is a throwback? There are three elements that would qualify a Pomeranian to be considered a throwback. Let’s take a quick look at them.

For a Pomeranian to be considered as a throwback, they have to be at least 14 pounds. Those Pomeranians that are over 10 pounds but under 14 pounds might be a partial throwback or a mixed breed.

While there’s a minimum weight, there’s no maximum. As such, it’s hard to tell how big throwback Pomeranians are. They might be 15 pounds, but some might weigh more than 25 pounds.

As I already mentioned, other Spitz breeds resemble Pomeranians a lot. So, if you mix a Pomeranian with a Japanese Spitz, Keeshond, or Finnish Spitz, you might get a big Pomeranian. But they won’t be real throwbacks.

In throwback Pomeranians, the extra weight is proportional to their body size. It’s not the result of weight gain.

Usually, toy breeds, such as Pomeranians, don’t have problems with weight. However, some Poms with dense body structures can become obese or overweight. In such cases, they won’t be considered throwbacks.

Can You Tell If a Pomeranian Is Purebred?

Since throwback Pomeranians are always purebred, you might be wondering how you can check it. Well, all purebred dogs have a pedigree that shows their bloodline. Think about it as a family tree that goes back several generations.

The good news is that if your Pomeranian is registered with a kennel club, they’re probably purebred.

The American Kennel Club, for example, requires a 3 generation pedigree for registration. It proves that your Pomeranian’s parents, grandparents, and great-grandparents were all purebred.

Moreover, since your Pomeranian’s parents and relatives are registered with the AKC, each has a pedigree that goes three generations back. There’s still a chance that breeders might lie about the breeding pair, but it’s a rare occurrence.

However, other kennel clubs are less strict when it comes to proving lineage for registration. Some accept dogs as long as the Pomeranian fits the breeding standard, and two people sign that the dog is purebred.

So, you’d want to check your kennel club’s rules and what it takes for them to accept purebred dogs.

If you don’t have a pedigree and don’t belong to any kennel club, the only way to tell if your Pomeranian is purebred is a DNA test.

It’s not so complicated as it sounds. All you have to do is purchase a DNA kit, swab your Pom’s cheek, and send a sample to a lab. Then you sit back and wait for the result.

While there’s room for error, most of these tests are accurate and show your Pomeranian’s ancestry and breed identification. So, if there’s a mix somewhere in the bloodline, it would show.

Where Can I Get a Throwback Pomeranian?

It’s easy to fall in love with throwback Pomeranians. However, getting a real one can be quite hard.

As I already mentioned, breeders can’t predict when such gene throwbacks would occur. It’s often quite a surprise because most breeders strive to produce Pomeranian puppies that fit the standard.

Even breeding two Pomeranians who have produced a throwback doesn’t guarantee that a throwback puppy would be born.

However, some breeders do breed Pomeranians close to maximum weight of 7 pounds. You can ask them to consider you in case a bigger than expected puppy is born.

But you have to be prepared that you might have to wait a lot for such an occurrence. Moreover, no one can guarantee how big a Pomeranian puppy would be when they grow up. They might be slightly bigger than the standard but not close to a throwback Pomeranian’s weight.

Knowing how big throwback Pomeranians are can help you figure out if your Pomeranian is a potential throwback or they just have a sturdy bone structure. However, if you think that your Pom has a weight problem, you should consult with your vet as soon as possible.