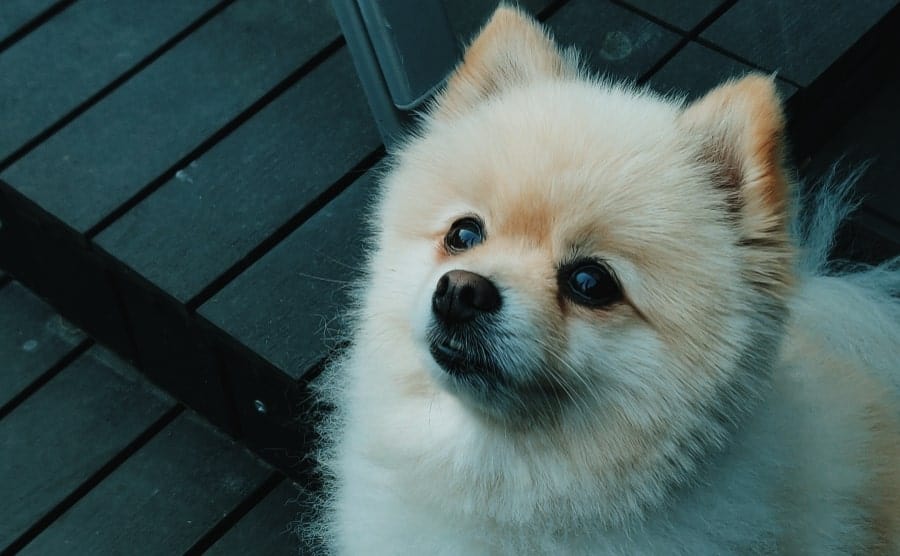 But what health issues do throwback Pomeranians have, and how can you increase your Pom’s lifespan? Keep on reading to find the answers.

What Health Issues Do Throwback Pomeranians Have?

Throwback Pomeranians have always been rare and few. As such, there aren’t many extensive studies on their health.

However, it doesn’t appear that these big Poms have any additional health issues besides those common for all Pomeranians. Let’s take a quick look at them.

One of the most common conditions in Pomeranians and other toy breeds is a collapsed trachea. It develops when the rings of cartilage that support your Pom’s windpipe get weak and soft.

As a result, your Pom’s trachea loses its shape and narrows. That’s bad because it obstructs the airflow and affects your Pomeranian’s breathing.

Since scientists think the disease has a genetic factor, throwback Pomeranians can have a collapsed trachea too. It could also develop from pulling too hard on a leash.

Pomeranians are prone to several eye problems that can be present at birth or develop over time:

All of these can lead to poor vision and eventual blindness in standard and throwback Pomeranians alike. While they might not directly affect your Pomeranian’s lifespan, a blind Pom is more likely to get injured.

Some toy breeds, such as Pomeranians are prone to hip dysplasia, a condition often seen in large dogs.

When a dog has hip dysplasia, their hip’s ball and socket don’t fit well, and instead of sliding smoothly, they grind. As a result, the joint deteriorates over time and affects your Pom’s ability to walk.

Fortunately, most Pomeranians can lead a normal life without surgery, unlike some large breeds.

Another common condition among toy breeds is a luxating patella. While it sounds complicated, a luxating patella is a kneecap that slides in and out of place. It can occur due to a malformation of the bone or as a result of an injury.

Due to their small mouth and teeth overcrowding, Pomeranians often suffer from dental disease. Throwback Pomeranians are no exception.

It might seem trivial, but dental disease can affect your Pom’s kidneys, heart, and liver. When it advances, bacteria might enter the bloodstream and cause irreversible damage to your Pom’s organs.

If you want to know how long Throwback Pomeranians live, you need to know what factors influence their lifespan. Let’s take a look at the most important three.

As a whole, big dogs have shorter lives than toy ones. For example, Pomeranians might live up to 16 years, while Great Danes and Bernese Mountain dogs live around 6-8 years. That’s because the large the dog, the harder the body works to maintain proper functions.

Since Throwback Pomeranians are bigger than standard ones, they might have a slightly shorter lifespan. However, there are no studies on the matter, so we can only speculate.

As strange as it sounds, gender does matter when we talk about your throwback Pomeranian’s lifespan. In general, female Pomeranians live longer than males. That’s a common pattern in many species, including humans.

Some diseases are hereditary and are passed from the parents to the puppy. Naturally, predisposition to some conditions (heart disease, for example) can shorten your throwback Pomeranian life.

That’s why respectable breeders maintain strict health screenings to make sure that their breeding pair is healthy before they produce a litter.

What Are the Leading Cause of Death in Pomeranians?

When we’re talking about how long throwback Pomeranians live, sadly, we have to take a look at the leading causes of death in Pomeranians.

Since Pomeranians are tiny, one of the leading causes of death is trauma.

All it takes to seriously injured a standard Pomeranian is to drop them or step on them accidentally. That’s not as hard to happen because Pomeranian puppies love to follow you around and observe what you’re doing. If you aren’t careful, you can really hurt your Pom.

Furthermore, falling from a high place also might result in life-threatening organ trauma. Pomeranians often forget about how small they are, so don’t think that they won’t attempt to jump from the table.

Throwback Pomeranians, on the other hand, weigh over 14 pounds, and that has its advantages. They’re less likely to get injured when jumping, and it’s not easy to step on them.

Furthermore, big Pomeranians aren’t so prone to injuries when dropped and have better chances of surviving if hit by an automobile or a car crash.

Like people, dogs can have heart problems, and throwback ones aren’t an exception to the rule. Unfortunately, heart failure is one of the most common causes of death in senior Pomeranians.

There are no data to suggest that throwback Pomeranians are less likely or more likely to develop heart disease than standard ones. Moreover, since heart diseases run in the family, regular checks are essential for early diagnosis.

Gastrointestinal conditions include a wide range of stomach issues, such as inflammatory bowel disease, pancreatitis, and intestinal obstruction.

While scientists don’t know why some dogs get pancreatitis and IBD, diet and food allergies can play a role. Intestinal obstruction, on the other hand, is often due to swollen foreign objects or tumors.

Unfortunately, the bigger size doesn’t protect throwback Pomeranians from viral disease, for example, canine distemper and parvovirus. These are often the leading cause of death among young puppies and unvaccinated adult Pomeranians.

Older Pomeranians and those with a compromised immune system are also vulnerable to infections and have a lower chance of surviving it.

The good news is that Pomeranians aren’t among the breeds prone to malicious tumors, like Golden Retrievers, for example. However, cancer is one of the leading causes of death among almost all dog breeds.

How to Increase Your Throwback Pomeranian’s Lifespan?

You can’t fight genetics, but you can take some measures to make sure that your Pom has a long and healthy life:

No one can tell you how long your throwback Pomeranian is going to live. Throwbacks might live even longer than standard Poms because they aren’t so prone to injuries. But their large size could also shorten their lifespan.