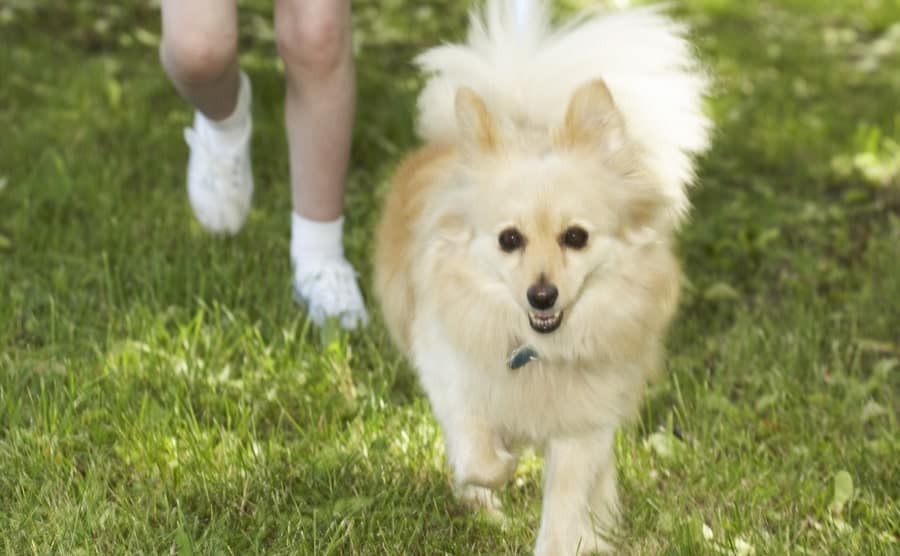 Pomeranians are one of the smallest dog breeds with a weight of 3-7 pounds. But do you know that there are Pomeranians that are much bigger and heavier? These would be throwback Pomeranians, and they can surprise you with their size.

So, what are throwback Pomeranians and how to recognize them? Keep on reading to find out.

What Are Throwback Pomeranians?

Pomeranians come from an ancient Spitz breed that lived in the Arctic region. Specialists estimate that these Spitz dogs were medium to large with a weight of 30-40 pounds.

These large Spitz dogs worked alongside humans to help herd cattle and hunt prey. They also pulled sleds through the snow. So, they had a strong and muscular body and a thick, double coat to protect them from the harsh northern weather.

As you can imagine, they were quite powerful, fierce, and intelligent. They were also stubborn and independent – qualities your tiny Pomeranian still retains.

The origin of the early Pomeranian is murky because these Spitz-like dogs were living all over Europe.

The earliest mention of the name Pomeranian is from 1764, found in a tour book about Germany and Switzerland. Likely, people named the new breed Pomeranian after the area where they were bred – Pomerania.

Eventually, the breed made its way to England and the queen’s court. There Queen Victoria fell in love with these fluffy dogs and started selecting breeding them. During her time, specialists estimate that the size of the Pomeranian was reduced with around 50%.

So, throwback Pomeranians are dogs that resemble the Pomeranians before people bred them down in size. They are similar not only in appearance but also in temperament, being more outgoing, stubborn, and likely to chase prey.

You’re probably wondering how that is possible. It’s all about genes and their ability to skip generations and appear after being dormant for generations.

So, the original genes, responsible for the large size of early Pomeranians, still exist in some of the modern Pomeranian bloodlines. As such, a tiny female Pomeranian can give birth to a throwback Pom and several normal Pomeranian puppies.

Which Pomeranians are Throwbacks?

Reading all this, you might think that all Pomeranians over 7 pounds are throwbacks. That’s not true. We have to consider three things that determine if a Pomeranian is a throwback – how much they weigh, how purebred are they, and if they’re overweight.

1. How Much Throwback Pomeranians Weigh

As I already mentioned, throwback Pomeranian should weigh at least 14 pounds. There’s no maximum size, but they rarely go over 20-30.

A lot of Pomeranians are slightly bigger than what the American Kennel Club’s standard specifies, and they weigh around 10 pounds. These aren’t throwback Pomeranians. They probably have a sturdy bone structure that explains the extra weight.

2. Throwback Pomeranians Should Be Purebred

Besides, knowing how much throwback Pomeranians should weigh, there’s another factor to consider – genetics. That’s because your Pomeranian might have another breed in their bloodline that explains their large size.

For example, crossing a Pom with another Spitz breed will produce larger than the average Pomeranian. Since Spitz breeds share a lot of similarities, you won’t be able to tell that your Pomeranian is a mixed breed. But they won’t be real throwbacks.

So, your Pomeranian shouldn’t have any other mixes in the bloodline of either parent for at least five generations back.

You’ve probably seen some overweight Pomeranians, albeit rarely. These aren’t throwbacks. Real throwback Pomeranians are large but not because of excess weight. Their weight should be proportional to their bodies.

How to Determine If a Potential Throwback Pomeranian Is Purebred?

So, you have larger than the average Pomeranian, and they aren’t obese. How could you know if they’re a mixed dog or a pure throwback Pomeranian? For starters, you can look at your Pom’s pedigree. That’s something like a dog family.

The American Kennel Club requires papers proving that your Pomeranian is purebred to register them. So, if your Pom is part of the AKC, they have a pedigree that goes back several generations. The same goes for their parents, grandparents, and great-grandparents.

While there’s a slim chance that the breeder might have lied about the parentage, you can be pretty confident that your Pomeranian is purebred. Unfortunately, other kennel clubs have less strict rules about proving a dog’s lineage.

If your Pomeranian doesn’t have a pedigree, the only way to tell how purebred they are is a DNA test. It can show the genetic makeup of your Pomeranian and if there are any mixes in the bloodlines.

You can purchase a DNA kit online and send a sample of your Pom’s saliva to be tested in a lab. In a few weeks, you’ll get the results. Usually, these tests are around 95-99% accurate, so they’re pretty reliable.

As I already mentioned, Spitz dogs have a similar appearance – prick ears, curly tail, and double coat. So, it’s easy to mistake one of the other Spitz breeds for a throwback Pomeranians.

The Keeshond is a close relative to the Pomeranian and has the same body type and double coat. Since these dogs weigh around 40 pounds, it’s easy to mistake one for a throwback Pomeranian.

However, the Keeshond dogs are only grey, black, or cream, while Pomeranians exist in a variety of colors.

The American Kennel Club doesn’t recognize the Japanese Spitz as a breed. But these white fluffy dogs are very similar in size and appearance to throwback Pomeranians. They look so much like a white purebred Pomeranian that they can deceive almost everyone.

The American Eskimo dog comes from the same ancient Spitz breed as your Pomeranian. Unlike Pomeranians, it has three types – toy, miniature, and standard.

As such, it’s easy to mistake them for Pomeranians and throwback Pomeranians. However, American Eskimo dogs are always white.

Where Can You Find Throwback Pomeranians?

For starters, most breeders strive to match the American Kennel Club’s standards. So, they don’t breed deliberately Pomeranians that are above or below the norm. It’s usually a surprise for them when their female Pom gives birth to larger than average puppy.

Moreover, the gene throwback is random. Even if you match two Pomeranians that have produced a throwback, there’s no guarantee that another throwback Pomeranian will occur.

What you can do if you want a throwback Pomeranian is to look for a Pomeranian breeder in the 6-7-pound range. Ask them to put you in a waiting list for a larger than expected puppy.

But keep in mind that there’s no guarantee that a large puppy will mature into a large Pomeranian. You might end up with a partial throwback Pomeranian or a normal one.

Knowing how much throwback Pomeranians should weigh can help you determine if your Pomeranian is a real throwback or a partial one. In either case, you have a unique Pomeranian that’s just as cute as their tiny brethren.