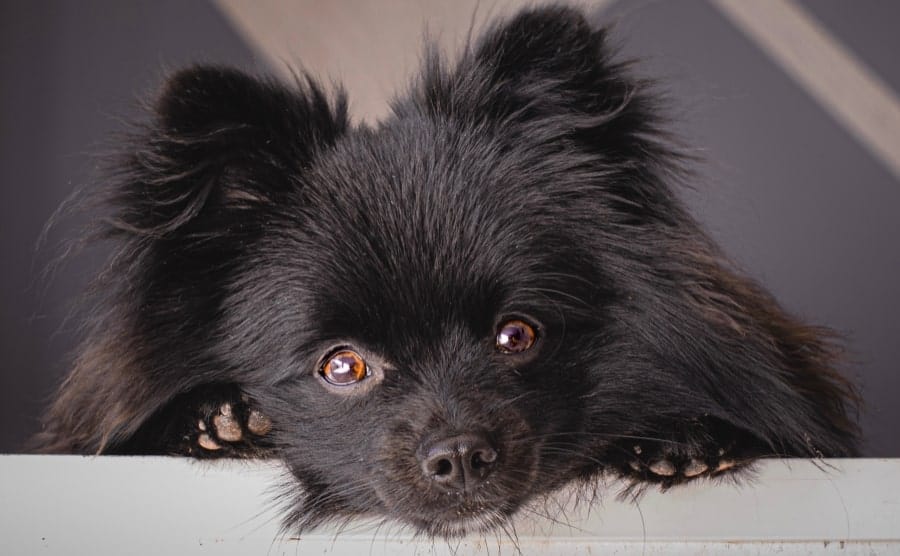 Have you ever heard people talking about throwback Pomeranians and how amazing they are? Then you might be wondering what the fuss is about and what’s so special about these Pomeranians.

So, are you curious to learn more about throwback Pomeranians and how they differ from the tiny Pomeranian, you know? Then keep on reading.

What’s the Difference Between Throwbacks and Standard Pomeranians?

As I already mentioned, throwback Pomeranians resemble the breed before people bred it down to size.

But they differ when it comes to size, temperament, and registration. Let’s take a quick look at these differences.

According to the American Kennel Club’s breeding standard, Pomeranians should weight between 3-7 pounds, while 4-6 pounds is the perfect weight for show Pomeranians.

Since throwbacks resemble the early Pomeranians, they’re far bigger than 7 pounds. For a Pomeranian to be considered a throwback, they have to be at least 14 pounds. That’s twice the maximum size of a standard Pomeranian.

Moreover, there is no maximum size for throwback Pomeranians, and some might weigh more than 20-25 pounds. So, there aren’t as tiny or fragile as your standard Pomeranian.

However, not all big Pomeranians are throwbacks. While the standard calls for 3-7 pound Poms, some are a little bigger because they have a sturdy bone structure. Poor breeding practices also tend to produce Pomeranian puppies that are bigger than the average ones.

Furthermore, crossing a Pomeranian with another Spitz breed also results in bigger than average puppies who aren’t purebred and can’t be considered throwbacks.

Most throwback Pomeranians have the same fierce and affectionate personality of standard Pomeranians. They’re alert, independent, and a little stubborn.

However, the original Spitz dogs that Pomeranians come from are closely related to Siberian Husky and the American Eskimo dogs. In fact, Spitz breeds are the closest ones to wolves when you compare their DNA.

So, some throwback Pomeranians might be more dominant, stubborn, and independent than your typical Pom. So, they might be hard to train and housebreak.

Moreover, throwback Pomeranians might prefer to spend more time outside than cuddling with you inside. They might also have the desire to chase small animals, and you might have to keep them on the leash during walks.

Let me make something clear. There’s only one official type of Pomeranian – the small, fox-like Pom we all know and love. I call them standard Pomeranians because they fit the breeding standard to the letter.

We might have teacup Pomeranians, teddy bear Pomeranians, and throwback Pomeranians, but these aren’t official terms. Breeders use these names to describe Pomeranians that don’t fit the breeding standard.

As such, the American Kennel Club won’t recognize a Pomeranian that’s over 7 pounds. So, you won’t be able to register a throwback Pom or take them to the show ring.

Not all big Pomeranians you’re going to see are throwbacks, as I already said. That’s because genuine throwback Pomeranians are rare.

So, when we talk about what a throwback Pomeranian is, you have to understand how these dogs appear.

Breeders worked for many years to reduce the size of the original Spitz dogs to the tiny Pom we know today. But some of the genes of these Spitz dogs are still present in the Pomeranian’s bloodline, albeit inactive and dormant.

When atavism occurs in Pomeranians, a standard Pomeranian gives birth to a bigger than expected Pomeranian puppy. But the rest of the litter might be as tiny as standard Poms or slightly above the maximum range of 7 pounds.

Moreover, genuine throwback Pomeranians are always purebred. That means that they shouldn’t have any other breed present in their bloodline for as far as five generations. If they do or they’re obese/overweight, they won’t be considered throwbacks.

Most kennel clubs have strict rules about proving your Pomeranian’s pedigree, so if you have registered your Pom, they’re probably purebred. So, if your Pomeranian is over 14 pounds and isn’t obese, you have a throwback.

However, Pomeranians with mixed blood are much more common. These Pomeranians have a relative in the bloodline from another breed that accounts for their larger than usual size.

For example, crossing a Pomeranian with a Keeshond, Finnish Spitz, or Japanese Spitz will produce large puppies.

How Long Do Throwback Pomeranians Live?

Since you already know what throwback Pomeranians are, you might be wondering how healthy they are.

As a whole, Pomeranians are a healthy breed and one of the longest lifespan of 12-16 years. There’s no evidence that throwback Pomeranians have any additional health conditions besides the one typical for standard ones.

But we should consider several factors when we talk about how long throwback Pomeranians live.

Usually, the bigger the breed, the shortest their lifespan is. The Great Dane, for example, lives for around 6-8 years, while some small dogs like Pomeranians reach 16.

The logical explanation is that the bodies of big dogs have to work harder to maintain functions and wear down quickly.

Since Throwback Pomeranians are at least twice the weight of standard Poms, it might affect their lifespan. However, there’s no research on the matter.

Moreover, throwback Pomeranians are less prone to injury, which is a leading cause of death in a lot of toy breeds.

The biggest factor that determines the lifespan of any breed is genetics. If a throwback Pomeranian is predisposed to a disease or born with a defect, it could shorten their lifespan.

Respectable breeders make sure that the parents are healthy and free of inherited conditions, but not all stick to these rules.

Unfortunately, Pomeranians are prone to heart disorders, collapsed trachea, and problems with their endocrine system (hormones).

Another factor that can influence how long throwback Pomeranians live is gender. Usually, females live longer than males, and that’s true for humans and dogs alike.

It makes sense because females are the ones responsible for keeping the species alive.

How Can I Get a Throwback Pomeranian?

For starters, most breeders strive to produce Pomeranians that match the breeding standard and work for the betterment of the breed. They won’t breed deliberately Pomeranians that are bigger than 7 pounds. So, any throwback Pomeranian is quite a surprise for them.

Still, many people breed Pomeranians for money and produce miniature Poms to satisfy the buyers’ desires for teacup Pomeranians. But even those unprofessional breeders will struggle to reproduce throwbacks because the genetic throwback is rare and unpredictable.

If you want a throwback puppy, you can talk to breeders to put you on a list for a bigger than expected puppy. But there’s no guarantee that the big puppy will grow into a throwback Pomeranian.

So, you can either wait or consider another Spitz breed that resembles throwback Pomeranians, for example, Finnish Spitz, Keeshond, and the American Eskimo Dog.

Throwback Pomeranians are amazing, and you’re lucky if you happen to have one. They’re just as affectionate, smart, and curious as standard Pomeranians. But they’re less fragile, and you don’t have to worry so much about hurting them on accident.