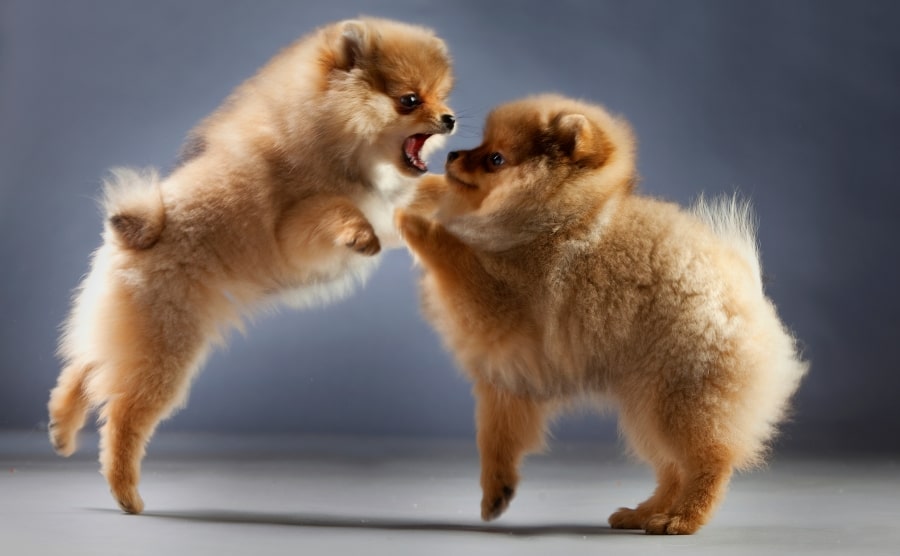 Despite their tiny size, Pomeranians have a lot of spirit and fearlessness in their small bodies. Sometimes they might even surprise you with the strength of their bark. However, if your Pomeranian is growling and nipping often, you might be worried that they’re aggressive.

So, are Pomeranians aggressive dogs? Pomeranians were bred to be companion dogs, so they don’t have strong combative or guarding instincts. They’re naturally suspicious of strangers and wary of other dogs, but Pomeranians should never be openly aggressive.

So, why are some Pomeranians aggressive, and how can you deal with your aggressive Pom? Keep on reading to find out the answers.

Why Is My Pomeranian Aggressive?

While Pomeranians aren’t among the most aggressive breeds, every dog can be aggressive under the “right” circumstances. Usually, Pomeranians might display aggressive tendencies towards people and other animals.

So, let’s see which the most common reasons for Pomeranian aggressiveness are.

As I already mentioned, Pomeranians are naturally suspicious of strangers. They aren’t dogs that make friends quickly with unfamiliar people or greet them with a wagging tail.

Instead, Pomeranians tend to be reserved around strangers until they get to know them better. As such, Poms need a lot of socialization when they’re still puppies to overcome fear and shyness.

Besides a lack of socialization, another common reason why your Pomeranians are aggressive is fear. Loud noises, such as thunderstorms or firework, sudden changes in the household, or the arrival of a stranger, can make your Pomeranian afraid.

A terrified dog has two main responses – flight or fight. So, if your Pomeranian can’t escape whatever is scaring them, they’re going to appear aggressive.

If your Pomeranian is freak out enough, they might bite because they don’t see any other way to defend themselves.

Is your Pomeranian aggressive towards other family members? It’s one thing when your Pom is growling at strangers and another when it’s a person they know well.

In some cases, Pomeranians are aggressive towards you or family members because you haven’t show them their proper place in the family hierarchy. Your Pomeranian is thinking they’re the alpha dog and trying to prove their position.

I’ve heard a lot of people talking about dogs suddenly snapping and attacking their owners. Let me tell you than your Pomeranian will never bite or attack you without reason or without being provoked.

Usually, when your Pomeranian goes from friendly to aggressive in a matter of days, your Pom is in pain. Whenever Pomeranians are sick or injured, they feel vulnerable and afraid. So, they’ll growl and snap when you come near them as a warning.

During socialization, sometimes your Pomeranian puppy has a negative experience with a person or an object. If it leaves a strong impression, your Pomeranian might act protectively whenever something reminds them of the situation.

The same goes if your Pomeranian is a rescue dog and comes from an abusive home.

What to Do When My Pomeranian Is Aggressive?

So, can you fix your aggressive Pomeranian? It depends on the severity of the aggression and what’s causing it. So, let’s see how to manage your Pomeranian’s aggression.

1. Establish Your Role As the Pack Leader

Pomeranians listen and obey the alpha dog. If you aren’t projecting the right image, your Pom will assume the role of the pack leader. As such, hey might act aggressively because they feel the need to protect their pack.

To maintain and reinforce your position as the alpha dog, you should:

Whenever a dog does something unacceptable, the rest of the pack “banish” the offender. That strategy works very well on Pomeranians, as well.

So, you should prepare an area where you’re going to keep your Pomeranian when they misbehave. You can get an indoor canine playpen or block a part of the room with gates, for example.

The playpen shouldn’t be isolated from the rest of the family. You want your Pomeranian to see the fun they’re missing.

The initial reaction of people is to shout at their Pomeranian to stop. That’s not effective and might encourage your Pomeranian to continue to misbehave.

What you should do is remain calm and isolate your Pomeranian in their playpen. Don’t pay any attention to your Pom and tell the rest of the family to do the same.

It might take your Pomeranian a while before they notice that you’re punishing them and realize that they’ve done something wrong.

If your Pomeranian growls or snaps, you take them back to their playpen. If they behave, you start interacting with them and reward them as long as they’re acting well.

Get some friends that your Pomeranian doesn’t know well and ask them to come to your house. Have your Pomeranian on a leash by the door and sitting in your feet. In addition to this, stock your pockets with treats.

Your goal is to show your Pomeranian that you approve of the visitors. So, there’s no reason for them to act defensively when somebody’s at the door.

If your Pomeranian remains calm, you should reward them with a treat. But any aggression should be answered with a time-out in the playpen.

How to Manage Pomeranian Dog Aggression?

What you need to manage this type of aggression is a harness to pull back your Pom and a lot of treats.

In addition to this, you need a neutral location to do the training exercise. Pomeranians are territorial of their homes, and bringing another dog home is an invitation for a war.

So, ask a friend with a dog to meet you at the park. Then make your Pomeranian sit and allow your friend to get near you with their dog.

The two dogs will probably sniff each other. Observe how your Pomeranian reacts. If your Pom starts barking excessively or acting crazy, you should pull your Pomeranian back and ignore them for 10-15 minutes.

Once your Pomeranians stops barking, you can let approach the other dog again and repeat the exercise. If they behave, you reward them with treats and attention. If not, you pull them back again and ignore them.

Eventually, your Pomeranian will understand that aggressive behavior isn’t acceptable and results in punishment.

Can You Prevent Aggressive Pomeranians?

So, can you do something to make sure that your Pomeranian doesn’t get aggressive? It depends on what’s causing the aggression, but here are some tips:

Are Pomeranians aggressive dogs? No, they aren’t. But it’s your job to make sure that your cute Pom will grow into a confident and mellow adult dog.