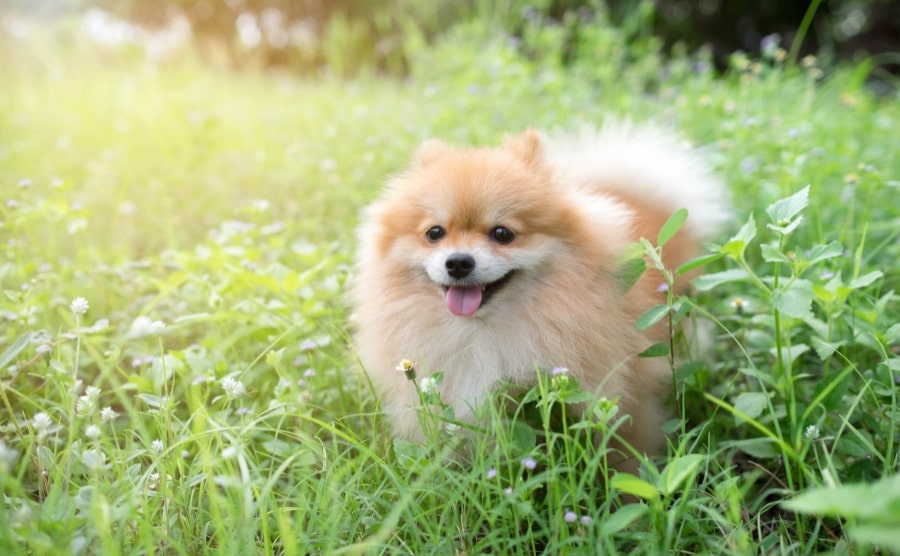 Have you ever noticed that your Pomeranian keeps staring at you? You might be reading, watching TV, or cooking dinner, but your cute Pomeranian has their eyes on you the whole time. What could it mean?

Since you might find it hard to decipher what your Pomeranian wants, let me help you. Keep on reading to find out the most common reasons why your Pom looks at you.

7 Reasons Why Your Pomeranian Stares at You So Much

Understanding why dogs do something is a tricky business because you can’t ask them what’s the matter. You need to consider not only your Pomeranian’s behavior but also what’s happening around you to decipher their actions.

So, let’s see 7 likely reasons why your Pomeranian stares at you so much.

Usually, whenever your Pomeranian feels that you’re ignoring them too much, they’re going to stare at you. Your Pom’s goal is for you to notice them, in case you’ve forgotten that they exist.

What your Pomeranian wants is for you to stop whatever you’re doing and spend some quality time together. You might give your Pom some belly rubs or simply pick them up and place them on your lap. They’ll be happy with any attention you can give them.

Think about this type of staring as a gentle reminder that your Pom needs attention and love.

2. Your Pomeranian Needs the Bathroom

If you’ve housetrained your Pomeranian, they might be staring at you to tell you that you should take them outside as soon as possible.

While some Pomeranian might whine and pace when they need to go, some might stare at you to remind you that you haven’t taken them to their potty spot.

3. Your Pomeranian Is Confused

Have you ever noticed that your Pomeranian stares at you whenever you talk to yourself or when you’re engaged in some activity? Then your Pomeranian is trying to figure out what’s happening and if you’re expecting them to do something.

Words and sentences mean a little to your fluffy Pom. Instead, these cute dogs learn to read our body language.

In this way, Pomeranians learn what they should and shouldn’t do and determine what they have to do to earn rewards. It’s a hard job and one they can’t accomplish if they don’t stare at you.

Moreover, Pomeranians are curious dogs, and sometimes they might stare at you because you’re doing something that leaves them puzzled.

4. Your Pomeranian Desires Something

If you’ve ever forgotten to feed your Pomeranian or take them for their daily walk, you might notice that your Pom is staring a lot at you. It’s an intensive stare that seems to pierce your very soul and makes you wonder what you’ve done wrong.

This type of staring is different from the one when your Pomeranian wants attention. In this case, your Pom has a specific desire that you have to figure out.

Usually, if your Pomeranian is staring at you and then they lie on their bellies, you might bet a fortune that they want a belly rub.

5. Your Pomeranian Is Expecting You to Do Something

Just like any dogs, Pomeranians learn your daily routine. They know when you come home from work and when it’s time for breakfast or dinner.

So, sometimes your Pomeranian stares at you because they’re anticipating a walk, a treat, or a petting.

Pomeranians might be tiny, but they’re still dogs, and dogs require a pack leader. The alpha is the one that makes all the important decisions and dictates the behavior of the whole pack.

So, whenever your Pomeranian isn’t sure how to react, they’re going to stare at their alpha for directions. For example, during your training sessions, your Pom might be uncertain what to do next and will stare at you for instructions.

7. Your Pomeranian Is Sick

Usually, it’s quite normal for Pomeranians to stare at their owners. However, sometimes long periods of staring at people, walls, or space can indicate a disease.

Besides staring, your Pomeranian might get lost at home, forget their name, or stop responding to commands.

How to React When My Pomeranian Is Staring at Me?

Whenever your Pomeranian is staring intently at you, it might make you worried or uncomfortable. However, it’s usually harmless and not a reason to worry or overreact. So, you should also avoid scolding your Pomeranian. After all, they’re not doing anything wrong.

Instead, you should try to figure out what your Pomeranian wants. Think if you’ve met all your Pomeranian’s needs and if you’re spending enough quality time with your Pom.

When talking about why your Pomeranian stares at you so much, aggression is a topic that we should cover. While Pomeranians aren’t aggressive, any dog might get aggressive when they’re scared or in pain.

As such, you have to learn to distinguish the benevolent staring discussed above from what some specialists call “hard eye.”

It’s hard to explain what “hard eye” is if you’ve never seen it before. Unlike your Pom’s friendly stare, your dog’s eyes harden and fix upon you in a way that makes you shiver. Owners often describe their dogs’ eyes as cold, glassy, and wide. It’s a clear warning to back off or else.

Usually, if your Pomeranian is staring at you so much because of aggression or dominance, you’ll know that something is wrong. Your Pom’s body will be tense, and they might growl, show their teeth, or snap whenever you come close.

You should leave your Pom alone until they calm down. Then you have to determine what’s the root of your Pomeranian’s aggression.

Such behavior isn’t common in Pomeranians and should be deal with as soon as possible. Pomeranians might be tiny, but they can bite and attack when provoked.

Should You Stare Back at Your Pomeranian?

You’ve probably heard that it’s a bad idea to stare into your Pomeranian’s eyes. It’s not polite in the dog world to stare directly into another dog.

That’s because dogs consider direct eye contact a challenge and might react aggressively. When you think about it, even you don’t like it much when somebody fixes their gaze on you.

On the other hand, some researchers have proven that mutual eye-to-eye contact with your Pomeranian increases the production of the hormones responsible for social bonding.

So, whenever you’re responding to your Pomeranian’s stare, you both get a hefty dose of “happy hormones.”

However, before you indulge in some soul-gazing, you have to access the way your Pom looks at you. If your Pomeranian is timid, shy, or reserved, they might be intimidated by your stare and react defensively.

But, if your Pomeranian is mellow and calm, they probably won’t mind if you stare back at them.

Remember that staring is something normal when your Pomeranian looks happy and content but that it could also be a sign of aggression.