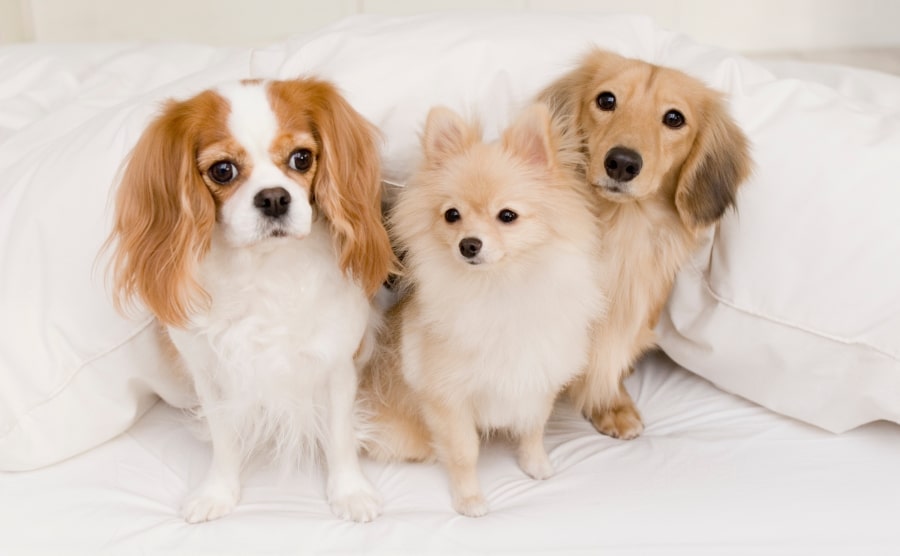 A second dog can bring a lot of joy and love to the family and be a loyal companion to your Pomeranian while you’re at work. But you’re probably worried if your Pomeranian will tolerate another dog.

So, what dogs do Pomeranians get along with? Well-socialized Poms can get on well with all dog breeds. But since Pomeranians are tiny, they get along better with other toy breeds, such as Maltese, toy Poodle, Shih Tzu, or Pugs.

So, why do some Pomeranians don’t get along with other dogs and how to introduce a new dog? Keep on reading.

Why Do Some Pomeranians Not Along With Other Dogs?

Some dog breeds are so friendly that they get along great with other dogs with no efforts on your part. Unfortunately, Pomeranians can be a bit of dog-aggressive, bossy, and dominant. As such, they don’t always play well with others.

Don’t let your Pomeranian’s tiny size fool you. Your Pomeranian doesn’t know how small they are, and they won’t hesitate to challenge a dog thrice their size.

Since their fierce spirit is trapped in a small body, your Pomeranian can get hurt even when the other dog doesn’t mean to harm them. That’s why you have to keep them close to you during walks.

So, let’s see five reasons why your Pomeranian might not get along with other dogs.

Since Pomeranians aren’t dog-friendly by nature, they need extensive socialization while young to be comfortable around other dogs.

Pomeranian puppies are very impressionable, and if they have a positive experience with other dogs, they won’t be so suspicious or defensive when they grow up.

Taking your Pomeranian puppy to the dog park or enrolling them in puppy obedience classes are great ways for your puppy to learn to get along with other dogs. You can also ask friends with dogs to meet you so that you can introduce your dogs to one another.

A single negative experience during socialization can have a huge impact on your Pomeranian’s behavior.

If your Pomeranian gets bullied or attack by another dog, they might remain wary and suspicious of any future dog they encounter.

Moreover, some dogs get overly excited when they meet a new friend and might hurt your Pomeranian accidentally.

That’s why it’s so important to make socialization as positive as possible.  Moreover, keep your Pomeranian close to you so that you can stand in front of any “dangers.”

3. You Aren’t the Pack Leader

Another reason why your Pomeranian might not get along with other dogs is that they consider themselves the pack leader. In this case, they see the other dog as a dangerous intruder into their territory and pack, so they react defensively.

You should establish your position as the alpha dog if you want your Pomeranian to get along with other dogs.

4. Your Pomeranian Is Afraid

You might have the best intentions in mind when you bring another dog to the house. But it can be a stressful experience for your Pomeranian because they don’t like changes.

Moreover, your Pomeranian might see the new dog as a competitor for attention, food, and toys. All this can make your Pomeranian afraid and anxious and lead to resource guarding.

If you haven’t spayed or neutered your Pomeranian, they’re more likely to be aggressive to other dogs. That’s because they see the other dog as a competitor. Specialists also recommend that your second dog should be of the opposite gender to avoid confrontations.

Moreover, fixing your Pomeranian is your best option if you aren’t thinking about breeding them.

How to Introduce Your Pomeranian to Other Dogs?

A lot of owners think that bringing another dog home to their Pomeranian means that the two dogs will become friends immediately. That’s not the case. You have to introduce them properly if you want your Pomeranian to get along with your other dog.

As a whole, Pomeranians bond strongly with their owner and might not be happy if they have to share the attention. Spoiled or bossy Pomeranians are more likely to pick a fight or bully your new dog.

If your Pomeranian seems happy, relaxed, and shows no signs of aggression, they’ll probably get along with any dog you bring home.

You can also use a blanket and place it where your new pet will be sleeping.

When you’re getting a new dog home, you shouldn’t bring them right to the house. Your house is your Pomeranian’s territory, and they might react aggressively to the intrusion.

Instead, have the two dogs meet at a neutral spot to avoid territorial conflicts and ask a friend for help because both dogs should be on a leash.

Allow your dogs to approach one another at their own pace. Don’t force them to interact because it can lead to aggression.

After your dogs have exchanged greetings, you should separate them and engage them in obedience training or a game. Then allow them to approach one another again. Repeat this exercise several times and offer treats to both dogs during the interaction breaks.

If your Pomeranian seems tense or aggressive, you should pull them back and try again after several minutes.

Keep it up until both dogs seem calm and relaxed. After that, you can take both dogs for a short walk around the neighborhood and bring them home.

No matter how well your Pomeranian gets along with the other dog during the introduction, you should keep both dogs separated. Put them in different rooms or use playpen.

Let your dogs see each other through baby gates so that they can get comfortable with the presence of the other. Supervise play sessions and interfere if they’re tension.

Don’t leave your dogs alone. That’s crucial if your new dog is much bigger than your Pomeranian.

Be patient. It will take time for your Pomeranian to accept the new dog and for the new dog to adjust to your house.

Feed the dogs separately and remove any toys or belonging that might spike conflict. More importantly, spend quality time with both dogs so that they don’t feel left out.

Can You Train Your Pomeranian to Get Along with Other Dogs?

If you’re wondering what dogs Pomeranians get along with, you might also want to know if you can train your Pom to tolerate other dogs. Yes, you can.

Here’s what to do:

It won’t be easy and will take a lot of time and patience. But your Pomeranian should start to behave around other dogs if you’re consistent. However, you should ask a professional dog trainer for advice if your Pomeranian doesn’t respond to this method.

What dogs Pomeranians get along with is a hard question. It depends a lot on your Pom’s temperament and their level of socialization.

However, you can teach your Pom to get along with any dog as long as you’re patient and your Pomeranian doesn’t have deep aggression problems.