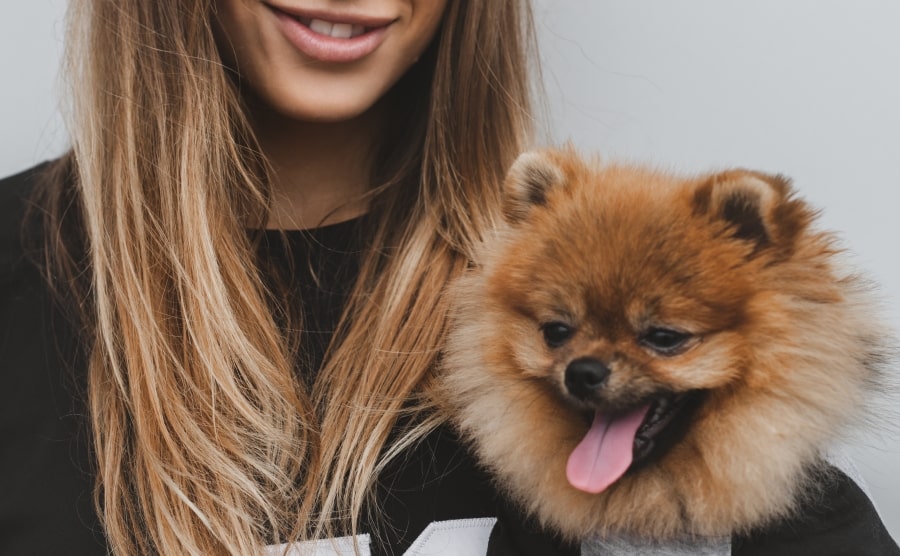 Have you ever wondered if your Pomeranian loves you? After all, you do the impossible to make your Pomeranian happy with belly rubs, treats, and pettings. But you might secretly have doubts that your Pom feels the same.

9 Signs That Pomeranians Love Their Owners

1. They’re Happy to See You

How does your Pomeranian act you when you come back from work? If they rush to say hello and greet you with a wagging tail, it’s a clear sign that your Pomeranian loves you. Your tiny Pom is so happy that you’re home that they can’t stay still.

It doesn’t matter how much time you’ve been gone. Even if you’ve left your house for a couple of minutes, your Pomeranian will be delighted to see you and will never miss to greet you enthusiastically.

2. Your Pomeranian Licks You

Since your Pomeranian can’t talk to tell you how much they love you, they might lick your face or body to express their feelings.

After all, grooming another person or a dog is a common way for dogs to show how much they care for that person/animal.

While you might not like it much when your Pomeranian showers you with slobbery kisses, it’s a sign of genuine affection. Your Pom considers you family and shows you that they accept you as the leader of the pack.

So, you’ll have to endure it or redirect your Pomeranian’s attention to something else. Don’t push your Pom away, or you might hurt their feelings.

Moreover, when your Pomeranian is licking you, their bodies produce happy hormones. So, whenever your Pom grooms you, it calms them down and makes them happy.

3. Your Pomeranian Stares At You

Not all Pomeranians are blunt about how they feel towards their owners. Sometimes they use subtle signs to express their affection. For example, some Pomeranians might stare at you a lot.

Often people think that dogs stare at you whenever they’re issuing a challenge and that meeting your Pom’s eye is a bad thing.

However, as researchers have proven, mutual eye contact strengthens the bond between owners and dogs because it increases the production of oxytocin, the “love” hormone.

In this case, your Pomeranian’s gaze will be soft and relaxed, and their eyes will be slightly squinted. You can almost feel their love washing over you, and you have the irresistible desire to pick your Pomeranian and cuddle them.

4. Your Pomeranian Wants to Cuddle

As a rule, Pomeranians will never seek affection from people they don’t trust or don’t like. If you think about it, you do the same, right?

In addition to this, you should consider how your Pomeranian acts when you hold them. If they’re happy and relaxed, your Pomeranian is enjoying your company. However, be careful how you pick and lift your Pomeranian so that you don’t accidentally hurt them.

5. Your Pomeranian Follows You Everywhere

Since Pomeranians are bred to be companions, they always seek to stay close to the person they love the most. As such, Pomeranians tend to follow you around the house.

After all, your Pomeranian never knows when you’re going to be in the mood for feeding them some tasty morsels or petting them. They also don’t want to miss the opportunity to cuddle with you whenever you sit or lie down.

Moreover, since you’re the pack leader, your Pomeranian prefers to keep you in sight in case they need directions.

It can be unnerving to have such a cute stalker, but you should remember that Pomeranians don’t know the meaning of personal space.

Since your Pomeranian can’t use words to say, “I love you,” they use a lot of body language to communicate how they feel. It’s not all about the tail, let me tell you that.

So, you shouldn’t rely on the tail to guess if Pomeranian loves you. Instead, you should look at your Pomeranian’s eyebrows and ears.

The researchers also noted that dogs moved their left ear back when they saw their owners and their right ear when they met strangers or things they didn’t like.

So, pay attention to your Pomeranian’s body language and their facial expression. If your Pomeranian looks happy and excited when they’re around you, you probably mean the world to them.

7. Your Pomeranian Wants to Play

Would you play with someone you didn’t like? You probably would avoid this person as much as possible. Your Pomeranian feels the same.

So, if your Pom is excited when playtime comes, they love you and want nothing more than to spend their day with you.

Playtime isn’t all about entertaining your Pomeranian or getting them tired enough to sleep through the night. It’s an excellent way to bond with your Pom and show them how much they mean to you.

8. Your Pomeranian Is Jealous

There was a time when people thought that dogs didn’t feel the same emotions as humans. But now we know better, and researchers have proven that dogs can feel even complicated emotions such as jealousy.

So, if your Pomeranian seems jealous whenever you pay someone else more attention and try to get between you and the “intruder,” they love you.

You’d better reassure your Pomeranian how much they mean to you so that your Pom doesn’t feel neglected or ignored. It might be cute to watch a jealous Pomeranian, but your Pom’s behavior might escalate if you don’t act on time.

Explained simply, contagious yawning is an automatic imitation of another person’s actions. It’s a common occurrence in people and dogs, as it turns out.

A study suggests that dogs that copy the behavior of their owners are emotionally connected to them. So, yawn and see if your Pomeranian will follow suit.

Pomeranians do love their owners and will do everything in their power to please their humans. All dogs do, even those that have been abused or maltreated. So, take good care of your Pom’s gentle heart.