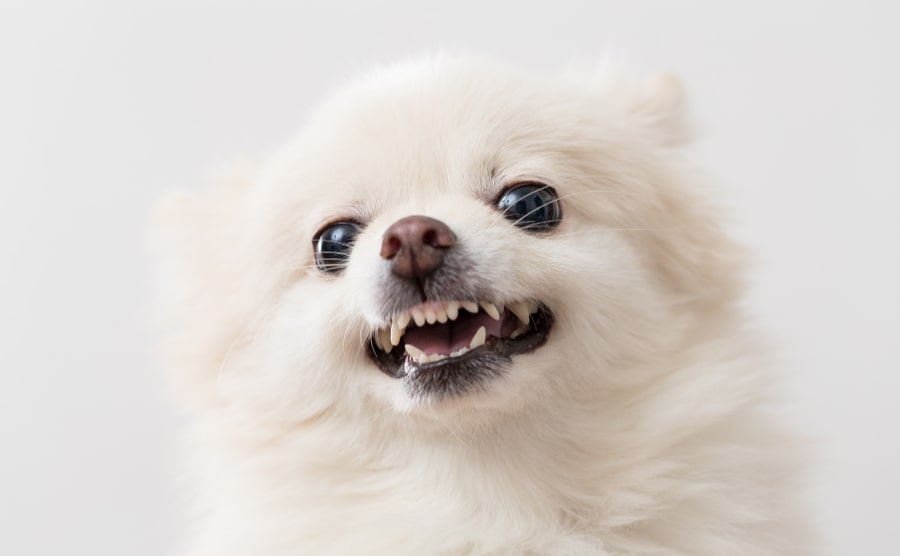 Has your Pomeranian lost a tooth recently? Then you might be freaking out and wondering what you need to know about Pomeranian teething. Fortunately, I’m here to help.

So, what do you need to know about Pomeranian teething? Pomeranians get their adult set of teeth around the time they’re 6-8 months old. However, Pomeranians often have issues with retained milk teeth, and as such, they should be observed to ensure that the change goes smoothly.

So, how can you tell that your Pomeranian is teething and how to recognize retained teeth? Keep on reading to find out everything you need to know about Pomeranian teething.

When Do Pomeranians Start Teething?

When your Pomeranian is born, they’re small and toothless, but that’s not for long. Besides growing like crazy during the first months of their lives, your Pom gets their first tooth by the time they’re 4 weeks old.

By the end of the second month, your Pomeranian will have a full set of 28 teeth. However, these teeth are called deciduous, also known as puppy or milk teeth. In other words, they aren’t your Pom’s permanent set of pearly whites.

The change from puppy to adult teeth starts around the fourth month. But that’s an average estimation, and the time varies between individual Poms.

For example, some Pomeranian puppies might start losing their milk teeth a week before they’re 4 months old or when they’re almost 5 months old.

When the teething process starts, the body absorbs the teeth’s roots. As a result, the teeth get loose and start falling to make room for the adult ones. The order of teeth change is not random.

Usually, the first adult teeth to erupt are the incisors. These are the front teeth that your Pomeranian uses for cutting and biting. Your Pom has six incisors on top and bottom, 12 in total.

Not long after the incisors come the canine teeth, more familiar to you as fangs. A Pom has four canine teeth – two on top and two on the bottom – and they’re used for tearing and shredding. These teeth appear by 12-16 weeks of age.

Premolars and molars erupt after the incisors and the canine teeth. While puppy Pomeranians have premolars, they don’t have molars. So, it’s logical that the molars are the last teeth to grow.

Every Pomeranian has 16 premolars and four molars on top and six molars on the bottom of the mouth. These teeth are used for shearing and crushing.

So, by the time your Pomeranian stops teething, they should have a full set of 42 permanent adult teeth.

In general, Pomeranians should stop teething around 6-8 months old. However, some Pomeranians might take their sweet time changing their teeth and finish the teething process by the time they’re 9 months old.

While that’s possible, you should have your Pom evaluated by the vet if they haven’t got all their puppy teeth by the time they’re 8 months old.

What Are the Signs of Pomeranian Teething?

Another thing you need to know about Pomeranian teething is what the symptoms of teething are because this is a time of discomfort for your Pom.

During teething, one of the most prominent symptoms is chewing. Since the gums are sore, Pomeranians try to soothe the pain of erupting adult teeth by chewing on whatever they find.

Your shoes, phone chargers, table’s legs, sticks, your fingers – nothing is safe with a teething Pomeranian in the house.

Besides chewing, a teething puppy might be reluctant to eat or play due to soreness. Of course, these signs might be due to other medical conditions and should be evaluated by a vet if they persist more than a day.

In addition to this, you might notice that your Pom is drooling. There might be some wet spots on the bedding, or your Pom’s face might be wetter than usual.

Furthermore, some blood on your Pomeranian’s toys is normal. I’m talking about a spot or two of blood. Prominent bleeding is not normal during teething and should be taken care of by a vet.

How to Tell That Your Pomeranian Has Retained Teeth

As I already mentioned, Pomeranians have 42 adult teeth in their small mouths. As such, they’re likely to have retained puppy teeth. Usually, that happens to the canines.

What goes wrong is that the milk tooth doesn’t fall when it should, and the adult one erupts beside it. So when you open your Pomeranian’s mouth, you’re going to notice two sets of teeth – one adult and one puppy.

This condition is neither comfortable nor healthy. For example, a retained puppy tooth might prevent the permanent tooth from erupting properly and affect your Pom’s bite pattern.

In addition to this, retained teeth could lead to teeth overcrowding, abnormal jaw position, and damage to the mouth.

As such, once you notice that your Pom has a retained tooth, you should take your Pomeranian to the vet. It’s not a condition you can remedy at home.

Don’t try to pull the puppy teeth from the mouth even if it looks loose and about to fall. Despite what it looks like, the roots are deep and pulling the tooth might result in infection. Your vet will remove the retained teeth surgically and take care of any leftover puppy roots.

How to Care for Your Pomeranian While Teething?

Besides knowing the symptoms of Pomeranian teething and how to recognize retained teeth, you need to take special care of your Pom when they are teething. Here is a quick guide to help you.

Since your Pom is likely to chew on everything they set their eyes on, you should puppy proof your house using the following methods:

Finding the right chewing toys for your teething Pom is harder than it sounds. For once, you need a toy that will fit in your dog’s mouth. It also should have the right texture to scratch those itchy teeth and not fall apart after a couple of days.

One brand I could recommend is Nylabone because they made durable nylon toys and are suitable for small dogs such as Pomeranians.

In addition to this, you should look for twisted rope toys suitable for small Pomeranian puppies. These are very durable, and the texture is perfect for teething Poms.

3. Help your Pomeranian deal with the discomfort

Besides chewing toys, you can provide frozen treats to lessen your Pom’s pain while they’re teething. For example, you can give your Pomeranian some frozen carrots or freeze chicken broth or beef.

You can also opt for commercial cold chewing toys that you can freeze and let your Pom nibble on them when they’re in pain.

Since retained teeth are so common in Pomeranians, you should check your Pom’s teeth frequently while they’re teething. That will help get your Pom comfortable with your hands around their mouths. In this way, it will be very easy for you to start brushing their adult teeth when it’s time.