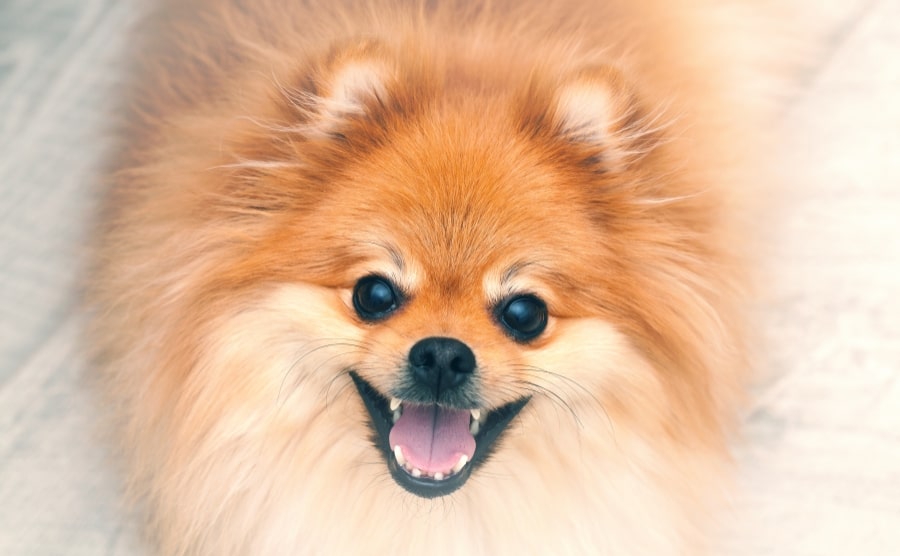 Has your Pomeranian puppy ever greeted you with a missing tooth in their beautiful smiles? While that might sound scary, it’s normal for a teething Pomeranian puppy. But you don’t know about the Pomeranian teething age, do you?

So, how can you tell that your Pomeranian has started teething and how can you care for them during this period? Keep on reading to find out.

A Guide to Pomeranian Teething Age

Pomeranian puppies are born toothless, blind, and deaf, which means that they’re defenseless without their mother around. The first few weeks, all they do is sleep, feed, and grow at an amazing rate.

Most Pomeranian puppies have their first teeth by the time they’re 5 weeks old, and they’re ready to eat solid food. Their mother is already thinking about weaning them because the sharp puppy teeth hurt when the puppies nurse.

Usually, the full set of 28 deciduous teeth emerges by the time your Pomeranian puppy is 2 months old. These teeth aren’t permanent and have to fall to make room for the adult ones.

As you can imagine, teething doesn’t happen overnight but slowly and in stages. First, the body absorbs the teeth root, so the teeth get loose and eventually fall. Then the new ones emerge in their place.

While it might seem like your Pomeranian puppy’s teeth change in a random order, that’s not how it goes.

The first to fall and grow in are the incisors, followed closely by the canine teeth and the molars and premolars. The process continues until the puppy is approximately 8 months old and has a full set of 42 adult teeth.

It sounds simple, but it’s quite an unpleasant experience for your Pomeranian puppy because their teeth and gums ache and itch while the new teeth are emerging. The discomfort comes and goes, but it can be quite intensive at times.

In addition to this, Pomeranians sometimes have trouble during their teething age. What happens is that the puppy tooth doesn’t fall out when it’s supposed to, and the new one doesn’t have enough space to grow in properly. Specialists call this condition retained puppy teeth.

You can’t deal with retained puppy teeth at home. They have to be removed surgically by your vet. Otherwise, your puppy might suffer from overcrowding teeth or a misaligned bite.

So it’s important to know what the Pomeranian teething age is and keep an eye on how those tiny sharp teeth are growing in. If you notice that your Pom has two sets of teeth, it’s time to make a vet appointment.

What Are the Symptoms of Teething in Pomeranians?

Intensive chewing is one of the first indications owners have that their Pomeranian puppy is teething. Your Pom will chew on everything in sight to try and find something that relieves the discomfort of emerging teeth. Unfortunately, your fingers and toes might also be on the list.

Besides chewing, teething Pomeranian puppies often drool more than usual and might experience mild gum bleeding. As a result, you might notice some blood left on toys or food dishes. Some Pomeranian puppies paw at their mouth when the teething pain gets too much.

Some owners also report finding deciduous teeth stuck in toys or their Pom’s fur. But don’t worry too much if you aren’t finding scattered puppy teeth around the house. Most often, puppies and children swallow their baby teeth.

Lack of appetite sometimes goes hand in hand with teething. Your Pomeranian puppy might seem hungry but will be reluctant to eat their food due to the pain in their gums. An upset stomach is also a possibility during teeth.

However, both events are usually short-lived and pass for a day or two. Talk to your vet if your Pom is drooling excessively, refuses food for more than a day, or their gums bleed heavily.

How to Care for My Pomeranian Puppy During the Teething Age?

Knowing what the Pomeranian teething age is, you can take steps to help you and your Pom get through this phase successfully. Here are some tips on how to care for a teething Pomeranian puppy.

One of the most important things you should do before your Pomeranian puppy starts teething is to puppy-proof the house. Take care of electrical cords, wires, chargers, and any chewable object that is within your Pom’s reach.

In addition to this, you shouldn’t leave any objects on the ground, be it clothes or books. They’re fair game for a teething puppy. Check the floor for small things, for example, pins that your Pomeranian can easily swallow.

When you’re not around to supervise, you should leave your Pomeranian in an enclosed puppy playpen.

I know how helpless some owners feel when their puppy is teething. Fortunately, you can relieve your Pomeranian puppy’s discomfort.

One way to do so would be to give your puppy frozen carrots, strawberries, or bananas. You can also wet a rag, twist it, and then freeze it. The cold works excellently on numbing the pain, and the hard surface allows your puppy to scratch that uncomfortable itch.

In addition to this, you can use teething gels to numb your Pomeranian’s gums but talk about it with your vet first.

Not all toys your Pomeranian puppy has will do the trick when teething starts. What you need are toys with the right texture that allow your dog to scratch the itch of emerging teeth.

The toys also should be sturdy to withstand excessive chewing, and they shouldn’t have small parts that your dog might swallow. It also should be small enough to fit into your dog’s mouth.

How to Stop Your Pomeranian Puppy from Chewing?

When a Pomeranian puppy starts teething, they often chew on inappropriate objects or people. That’s something you have to address as soon as possible so that your puppy doesn’t develop bad chewing habits.

Whenever you see your Pomeranian puppy chewing on something they shouldn’t, what you have to do is distract them. Say a firm “No!” or clap your hands and wait until the puppy stops chewing. Then redirect their attention to more appropriate chewing targets, such as your Pom’s favorite toys.

In addition to this, you shouldn’t leave your Pom to roam the house when you’re not there to supervise. You can also use deterrent sprays if your Pomeranian puppy chews on large unmoving objects.

As for chewing on people, act hurt even when your Pomeranian puppy nibbles on your fingers and then ignore them for a couple of minutes. That’s what happens between puppies when one plays too rough and bites the other too strongly. It shows your Pomeranian that biting equals no fun and attention from you.

Now you know everything about the Pomeranian teething age to take care of Pomeranian puppy. Just remember to be patient with your little Pom because teething is a painful experience for them, and being scolded is the last thing they need.