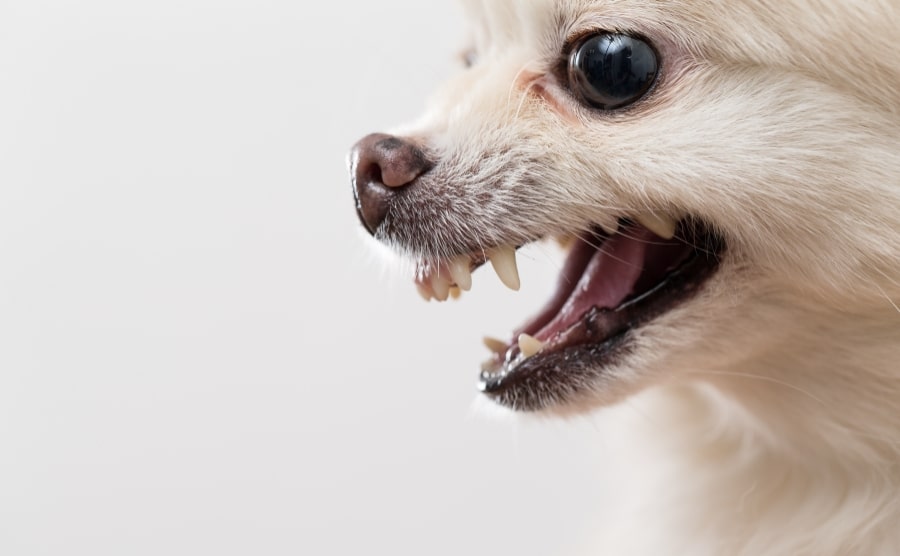 Have you noticed that your Pomeranian puppy chews on everything? Teething is one of the first difficulties owners have to tackle when they get their first Pomeranian puppy. If you’ve never taken care of a teething puppy, you can be quite overwhelmed by the whole experience.

So, when do Pomeranians teeth? In general, Pomeranians start teething approximately when they’re 4 months old, but some might lose their first tooth a week earlier or a week later. Most Pomeranians will have a full set of adult teeth by the time they’re 8 months old.

So, how can you tell that your Pomeranian is teething, and how can you help them with teething pain? Keep on reading to find out.

How to Tell If My Pomeranian Is Teething?

Most Pomeranians have their set of 28 baby teeth when they’re two months old. By that time, they’re also completed weaned from their mother and ready to go to their new homes.

These puppy teeth, however, don’t last for long. Only two months after all baby teeth have emerged, it’s time for them to fall so that the adult ones can grow in their place.

Teething doesn’t happen overnight. Instead, the adult teeth replace the puppy ones tooth-for-tooth. It makes sense if you think about it because if a lot of teeth fall at once, your Pom will have difficulties eating. That’s why it takes months for all the teeth to change.

The mechanism of teething is quite simple. The permanent tooth dissolves or absorbs the roots of the puppy tooth. The loose tooth falls, and the new one starts to emerge.

Usually, the first ones to fall and grow are the incisors, then the canines, and finally, the premolars and molars. By the end of the 8th month, your cute Pomeranian should have 42 healthy adult teeth in their mouth.

While teething might sound easy, it’s quite unpleasant for your young Pomeranian puppy because their gums hurt and itch while the new tooth is emerging. Your Pomeranian puppy won’t be in pain all the time, but there will be quite a few episodes or days of severe discomfort.

Since your Pomeranian puppy doesn’t know what’s happening to them, they do the only thing that slightly relieves the pain. In other words, they chew on everything they see, including shoes, clothes, cables, your fingers, and toes.

So, you can tell when your Pom is teething by their excessive chewing. Since the gums are irritated, you might also find some blood spots on toys or food dishes.

In addition to this, teething Pomeranians often drool more than usual, and they might paw at their mouth whenever the pain gets too much. For some puppies, the discomfort is so great that they might be reluctant to eat or have gastrointestinal problems.

While these things are normal during teething, you should consult with your vet if your Pom doesn’t regain their appetite in a day or two. The same goes if you notice excessive gum bleeding.

Don’t think that you’ll find a bunch of fallen puppy teeth around the house when Pomeranians teeth. That’s because Pomeranian puppies often swallow them. For all my years of experience with cats and dogs, I can count on the fingers of my hand the times I’ve found a baby tooth.

What Are Retained Puppy Teeth?

Most dog breeds go through the teething process without any issues. Unfortunately, Pomeranians suffer from a common teething problem called retained baby teeth.

What happens is that the milk tooth remains in place, and the adult one erupts beside it. As a result, the permanent tooth can’t grow properly because there isn’t enough space.

Retained teeth are easy to spot. When you open your Pom’s mouth, you’re going to notice two teeth where only one should be. In most cases, Pomeranians retain their upper and lower canine teeth and the incisors. Rarely, you can see a retained premolar tooth.

Specialists aren’t certain what causes this condition or why it is so prominent among Pomeranians. However, a retained baby tooth should be treated as soon as possible. Otherwise, your Pom is likely to have teeth overcrowding, which increases the risk of dental disease in Pomeranians.

Usually, retained puppy teeth are removed surgically when you take your Pomeranian to get fixed.

Don’t try to take care of retained puppy teeth at home. The retained tooth might seem loose, but if it hasn’t fallen out, its roots are partially intact. These roots run deep, and trying to pull the tooth might result in infection. Not to mention that your Pomeranian puppy might bite you.

What Can I Do to Relieve Teething Pain?

When their Pomeranian teeth, a lot of owners feel powerless to help their dog deal with the pain. While you shouldn’t give your Pom any human medication to relieve teething pain, you can still alleviate your Pom’s discomfort.

One of the best ways to deal with teething pain is to offer your Pomeranian something cold. The cold will numb the gums, and the chewing motion will relieve the itching.

You can freeze carrots, apples, or bananas and offer them as a treat to your dog. Some toys are also suitable for freezing in the refrigerator. Ice cubes also might come in handy if your Pom loves to munch on them.

Not all toys do a good job once teething pains begin. Since Pomeranians are tiny, they need a toy that has the right texture to soothe the pain and fit in their mouth. My advice is to look for toys made of sturdy material, which don’t have small parts that your dog can swallow.

The KONG brand is known for its high-quality, and they have rubber toys that are suitable for small breed dogs such as Pom. In addition to this, some KONG toys are stuffable, and you can fill them with peanut butter or treats to spike your Pom’s interest.

If chewing toys and frozen treats aren’t helping your Pomeranian puppy much, you might ask your vet for a suitable numbing gel. Such products are applied to the gums to soothe the irritation and reduce the pain.

Some owners also use herbs to relieve teething pain. However, I recommend that you consult with your vet before you give your Pomeranian any natural remedies for teething. Since Poms are so small, it’s very easy to overdose them even with something safe for dogs.

How to Stop Inappropriate Chewing in Teething Pomeranians?

When Pomeranians teeth, they often find a lot of inappropriate objects to chew on, and that includes you. Since you don’t want your Pom to develop bad chewing habits, here are some tips to control your Pom’s chewing.

When you’re not at home to supervise, you should always keep your teething Pomeranian puppy in their playpen. Otherwise, there is no telling what the little one will do when you aren’t around to supervise.

Keep an eye on your teething puppy and make sure that there isn’t anything dangerous on the floor they could swallow.

If you catch your Pomeranian chewing on something inappropriate, you should interrupt them immediately. Clap your hands or call your Pom’s name. Don’t shout or yell.

When your Pomeranian stops chewing, offer them an appropriate chew toy, and reward them. You can rotate the toys to make sure that your Pom doesn’t lose interest.

Some owners give their Pomeranians old socks or shoes to chew. However, dogs don’t make a difference between old and new. So, you’re teaching your Pomeranian that it’s all right to use your shoes and clothes as chewing toys, and they will keep doing it.

While it might seem to you as if your Pomeranian will never stop teething, all will be over in a couple of months. Get a few quality teething toys, be patient, keep all inappropriate chewing objects out of your Pom’s reach, and you’ll be fine. But don’t forget to watch out for retained puppy teeth.

Would you like to tell us about your first teething Pomeranian puppy? Then leave us a comment.