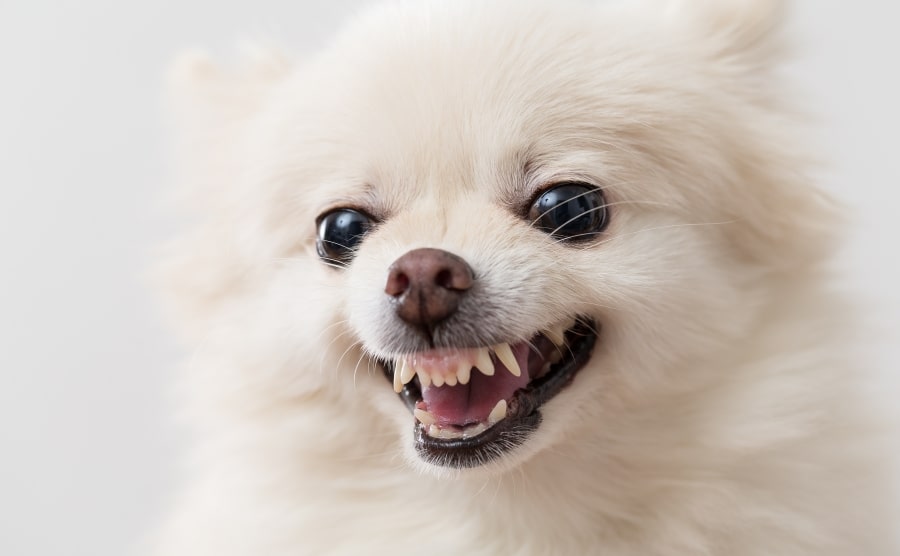 Is your Pomeranian puppy nipping and biting you a lot? While Pomeranian puppies are tiny and cute, you shouldn’t underestimate their teeth’s sharpness. Biting in any form should be resolved as soon as possible to prevent future behavior problems.

Since training a Pomeranian puppy not to bite sounds tricky, I’ve prepared a 7-step guide to help you achieve your goal. Just keep on reading.

1.Understand Why Your Pomeranian Puppy Is Biting

As a whole, Pomeranians aren’t an aggressive breed, and they very rarely bite out of pure aggression. Usually, the two most common reasons why your Pomeranian puppy is biting are teething and pain/discomfort.

When Pomeranian puppies start to teeth, their gums itch and hurt. As a result, your puppy will try to chew on everything in sight to relieve the discomfort of the emerging adult teeth.

Sometimes, your fingers and toes look just as suitable chew as any toy. So your Pomeranian might nip you when you handle them or pet them. They’re just trying to get some relief from the teething pain.

Besides teething, Pomeranian puppies might also bite when they’re under the weather. That’s because your Pomeranian feels vulnerable and afraid when they’re sick. Moreover, you might be pressing on a sore spot when you’re picking them up.

If your Pomeranian puppy looks lethargic, doesn’t have an appetite, or seems in pain, you should take them to the vet immediately.

You don’t need a pile of toys but a couple of ones that will do the trick and satisfy your Pomeranian’s chewing needs.

Usually, most Pomeranians like rubber chews with nubs because they scratch the teething itch and massage the gums.

However, you also should have some soft toys available for the days when your Pomeranian’s gums are hurting too much. I recommend that you try Nylabone’s Key Ring Toy and KONG’s soft toys.

It’s also a great idea to freeze a rubber toy in the fridge or offer frozen treats. That’s because the cold work wonderfully on numbing the gums and is quite effective.

3. Establish Your Position as the Leader of the Pack

One of the easiest ways to establish your position as the leader of the pack is to enforce the “Sit” command whenever you’re feeding your Pomeranian puppy. That shows your puppy that you’re in control, and they have to obey you if they want to eat.

Moreover, when you’re going out of the house, you should be the first out and the first in. Your Pomeranian puppy should follow you, not the other way around.

If you’ve ever watched puppies play, you know that they play, wrestle, and bite one another. However, sometimes one puppy bites the other too hard. When that happens, the hurt puppy usually yelps and then ignores the other puppy for a while.

In this way, puppies learn that they should control the force of their bite. Otherwise, no one will play with them.

So, whenever your Pomeranian puppy bites or nips at you, you should act hurt. Say loudly, “Ouch!” even if it doesn’t hurt at all. Then don’t pay your puppy any attention for a couple of minutes.

Eventually, your Pomeranian puppy will understand that you won’t play with them when they bite. That should make them stop nipping at you when you handle them.

Do you know why your Pomeranian puppy continues to bite you? Puppies repeat certain behaviors when they get some sort of reward.

For example, your Pomeranian puppy nips you on the leg or hand because they know that you’re going to pay them attention. So, you’re rewarding your puppy without realizing it.

What you should do instead is place your Pomeranian puppy in their playpen. Then leave them there for a couple of minutes. It’s essential that you don’t pay any attention to your puppy. Don’t talk to them or even look at them. The same goes for the rest of the family.

It might take your Pomeranian puppy time to realize that you’re “punishing” them. So, wait for your puppy to start whining and pacing before you let them out of the playpen. Don’t interact with your puppy immediately, but wait for a couple of minutes. Then you can casually initiate contact.

If your puppy bites you again, you bring them back to the playpen. But they behave, you should praise and reward them.

In this way, you’re going to teach your Pom that biting equals banishment and that not biting gets them rewarded.

The appropriate punishment for a biting Pomeranian is ignoring them or isolating them in the playpen.

You shouldn’t shout or yell at your Pom. The only thing you’re going to accomplish is to make your Pomeranian puppy afraid of you. And when dogs are scared, they’re more likely to bite.

Some owners use a spray bottle as a way to train their Pomeranian puppy not to bite. You can give it a go only if you have no success with the other methods, or your puppy is acting too aggressively.

Sometimes Pomeranian puppies get overly excited when they’re playing with you or a toy and might bite out of excitement.

That’s not a behavior you want to encourage. So, you should stop playing as soon as your puppy nips at you or remove the toy that’s making your puppy excited. That will teach your Pom that they should behave if they want to have fun with you and their toys.

In addition to this, you should always ensure that your Pomeranian puppy has an adequate amount of exercise per day. A bored puppy is likely to bite out of boredom or get overly excited during playtime.

Training your Pomeranian puppy not to bite will take time and patience. It’s not going to happen overnight, and you have to consistent in how you react to biting. I know how hard it is to ignore your Pom when they’re misbehaving, but it’s for their well-being.