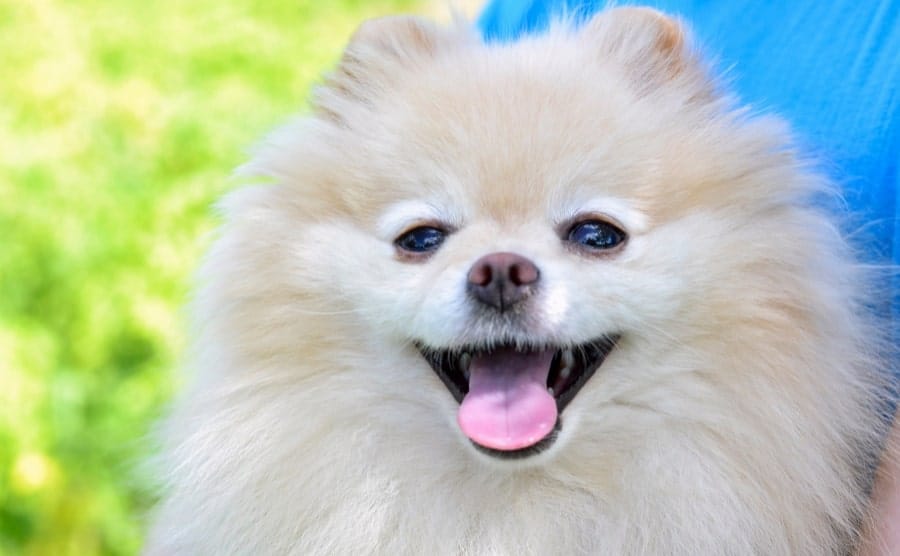 Pomeranians are considered great companions, with an intelligent mind and usually the ability to train quite easily. Unfortunately, Pomeranian mouth problems are something many of these pet owners struggle with.

So, what are the most common Pomeranian mouth problems? Pomeranians are more susceptible to dental problems. In many cases, this dog breed develops gum disease as early as the age of two. The progression of gum disease due to tartar build-up can lead to pain, inflammation, and, ultimately, tooth loss.

As a Pomeranian owner, you owe it to yourself and your dog to learn about common Pomeranian mouth problems. We look at common dental issues and signs you should look for in this post.

Common Pomeranian Mouth Problems You Need To Know About

Periodontal disease is caused by pathogenic microorganisms that infect the gum – particularly the gum region that immediately surround the teeth of your Pomeranian. This area of gum is responsible for keeping teeth in place and providing adequate support while your dog is eating.

The infection causes periodontal ligaments, which hold teeth together to loosen. The gum around the affected teeth will also start to recede. This is a progressive disease that gets worse over time. While your Pomeranian’s teeth would become loose and shaky during the earlier stages of periodontal infection, they will eventually dislodge from the sockets that keep them stable. A dislodged tooth will then eventually be lost.

The major issue when looking at Pomeranian mouth problems is that this particular dog breed depends on their mouth more than many other breeds for breathing. This factor leads to dry mouth in the dog. The dry mouth issue among Pomeranians is one crucial factor that causes a much higher risk for periodontal infection, as well as other problems with their teeth and gums.

Apart from periodontal infection, other Pomeranian mouth problems to take note of as well include:

There are several signs that you as a Pomeranian owner need to look out for, which may signal the presence of gum disease.

One of the first signs to look out for is your Pomeranian finding it difficult to pick up food. They may also find it harder to bite and chew their food.

In addition to the difficulty in eating, also look out for the following signs that may signal the development of gum disease and related dental issues in your Pomeranian:

Another important sign of Pomeranian mouth problems would be tooth loss. This is often a sign that gum disease is progressing and becoming more severe. At this stage, the supportive tissue is affected.

The treatment for Pomeranian mouth problems depends on the condition that affects your dog as well as the severity. Some treatments may be more invasive than others.

A thorough dental examination of your dog’s mouth is the first step. The vet will need to take a closer look at your dog’s teeth and determine the best route of action from there. An X-ray test may be needed in order to get an idea of how severe the damage on the inside of your dog’s gums is.

Periodontal disease in a Pomeranian is divided into four different stages. The first two stages will not require invasive treatment. In most cases, the teeth will be thoroughly cleaned on a regular basis. The vet will also need to clean below the gums. This is an area where bacteria and food particles can collect and worsen the disease. An ultrasonic scaler will be used during the cleaning process.

If there are crevices in the Pomeranian’s teeth, then these will need to be filled too. This is important as bacteria can also collect in such crevices.

If your Pomeranian has a more advanced stage of periodontal disease, then there will be a need for more invasive treatment. A thorough cleaning of their teeth is the first step, similar to the other types of periodontal disease. Further treatment may include the removal of a tooth that is diseased. Surrounding tissue may also be removed in some cases.

Gingivectomy may be needed in cases where your dog is affected by advanced gingivitis. In such a case, disease tissue that has been infected by the disease will be removed through a surgical procedure.

When treatment has been provided, your Pomeranian may be prescribed mediation to assist in reducing the pain they might experience.

How Can The Risk Of Pomeranian Mouth Problems Be Reduced?

While Pomeranian mouth problems seem to be a common issue among dog owners of this breed, there are ways to reduce the risk of gum disease and other dental problems. Prevention is critical to ensure you would not have to later take your dog for invasive procedures, such as to get their teeth or gum tissue removed.

A regular checkup with the vet is a critical part of the prevention process of gum disease in Pomeranian dogs. You need to make sure you take your dog to the vet at least once a year – every six months would be even better. This ensures they can get a full checkup – which will include a look at their teeth. When problems like gum disease are detected early, then treatment would yield more successful results.

In addition to taking your Pomeranian to the vet for a full checkup on a regular basis, there are a few other things that you can also do to help reduce the risk of gum disease. These include: