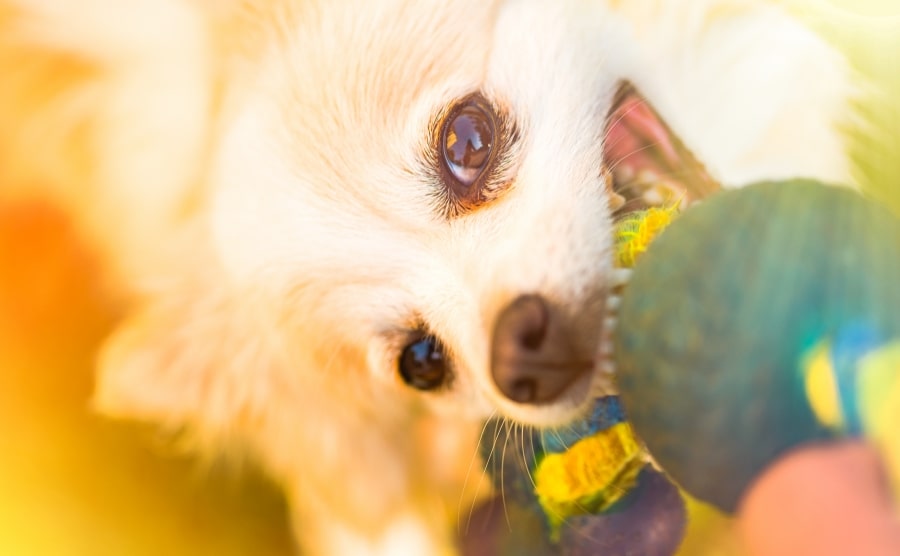 So, why are your Pomeranian’s teeth falling out? Tooth loss in a Pomeranian is often the result of periodontal disease and tooth decay. However, Pomeranians also lose teeth when they’re teething because they replace their puppy teeth with adult ones.

So, how can you tell why your Pomeranian’s teeth are falling out, and can you prevent it? You’ll find all the answers you need below.

How Do Your Pomeranian’s Teeth Fall Out?

Pomeranians are among one of the cutest dogs in the world with their foxy faces and elegant body. That’s what makes them ideal for the show ring. Unfortunately, dental issues are the most common reason why a lot of Pomeranians never set paws on the stage.

As it happens, Pomeranians have small mouths that have to fit 42 adult teeth. To make matters worse, teeth overcrowding is a common issue in Pomeranians due to retained puppy teeth.

What happens is that the milk tooth remains and prevents the adult one from erupting normally. As a result, your Pom’s teeth are too close to one another, which damages the teeth’s surface.

Moreover, Pomeranians breathe through their mouth a lot, so they have drier mouths than other breeds. That means there isn’t enough saliva to cleanse the teeth and remove bacteria and leftover food.

Their small mouth, an insufficient amount of saliva, and teeth overcrowding make it easy for plaque to accumulate on their teeth. That’s a white, sticky substance made of hundreds of bacteria.

If plaque remains on your Pom’s teeth for more than two days, it hardens into tartar or dental calculus. While you can remove plaque by brushing your Pom’s teeth, you can get rid of tartar only through professional dental cleaning.

If you don’t deal with tartar, it will continue to form above and below the gum line. The result is gum inflammation, so your Pomeranian’s gums will look puffy, red, and might bleed a little. That’s the beginning of gingivitis or gum disease.

Untreated gingivitis progresses to periodontal disease, and pockets form between your Pom’s teeth and gums. These pockets collect bacteria and damage the teeth’s supporting structure and the jawbones.

After a while, your Pomeranian’s teeth will start falling out because there is nothing to hold them in place. Your Pom’s jaw will also become fragile and might shatter.

But if bacteria buildup in the mouth, they attack the tooth enamel and produce acids that destroy it. Without the enamel, the tooth is vulnerable and start to decay.

What Are the Signs of Periodontal Disease in Pomeranians?

The bad thing about gum disease is that your Pom won’t show any symptoms in the beginning. So, the inflammation might go untreated for quite a while.

But once periodontal disease advances, you’re going to notice a lot of signs, including:

How to Prevent My Pomeranian’s Teeth from Falling Out?

By the time you notice that your Pomeranian’s teeth are falling out, periodontal disease has already advanced and damaged your Pom’s mouth. Even if it doesn’t look like it, your Pom is probably in a lot of pain.

Advanced periodontal disease is difficult and costly to treat. As such, you should do all you can to avoid it. So here are some tips on how to prevent your Pom’s teeth from falling out.

Once your Pom starts teething, you should check their mouths as frequently as possible. You should look out for retained puppy teeth so that your vet might extract them and prevent teeth overcrowding.

In addition to this, if you check your Pom’s teeth regularly, you’re going to notice gum redness or decaying teeth before they turn into a severe problem.

I can’t stress how important it is to brush your Pom’s teeth at least 2-3 times a week or daily, if possible. Brushing removes the accumulated plaque and reduces the risk of tartar buildup and inflammation. It will also freshen your Pom’s breath.

A lot of owners are reluctant to brush their Pomeranian’s teeth because their dogs put up a fight. However, if you get your Pom used to the feeling of the brush and toothpaste when they’re puppies, you’ll have no problems afterward.

3. Get the Right Kind of Food

Low-quality dog food often contributes to dental problems because it’s rich in carbohydrates and destroys the enamel. That’s why you should feed your Pomeranian high-quality food.

Often brands have “dental care” dog food whose kibbles scrub the plaque away from the teeth. Certain brands of dog food also contain additives that prevent plaque from hardening.

Dental chews are also an excellent way to keep your Pom’s teeth healthy.

Chewing toys also help to prevent gum disease. When your Pom is chewing on a toy, the motion scrubs the plaque off the teeth, massages the gums, and exercises the jaw’s muscles.

When Is It Normal for Pomeranians to Lose Teeth?

I’ve heard many of my first-time Pomeranian owners say, “Help! My Pomeranian’s teeth are falling out!” I usually respond by telling them to calm down because their Pomeranian might be teething.

Pomeranians are born without any teeth and get their first set of puppy teeth by the time they’re 2 months old. Since these are not permanent teeth, they start to fall once your Pomeranian puppy starts teething.

The teething process starts around the time your Pom is 4 months old and finishes around the time they’re 8 or 9 months old. So, any teeth that fall out during that time is not a reason to worry. It’s the adult ones you have to worry about.

During teething, your Pomeranian puppy will chew on everything they set their eyes on, drool more than usual, and have swollen red gums. Light gum bleeding is normal during teething, so don’t freak out if there’s blood on the toys.

You should count yourself lucky if all your Pom’s milk teeth fall during the teething stage. As I already mentioned, Pomeranians often retain some of their puppy teeth so that the adult ones can’t set in properly.

Since your vet has to remove the retained teeth surgically, it’s not a pleasant experience for your Pom.