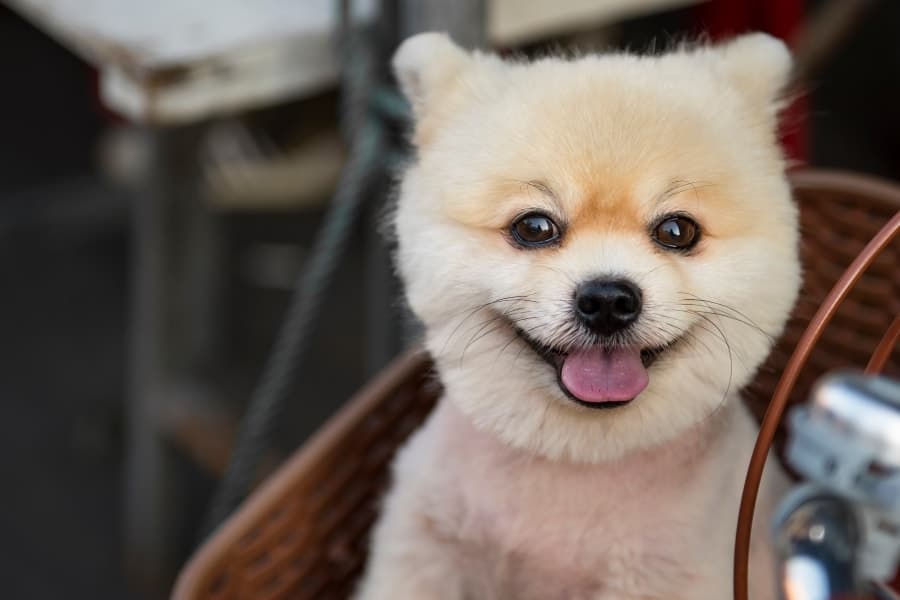 While young Pomeranians have been diagnosed with Cushing’s disease, the vast majority won’t show the following symptoms until their in their adult years:

If your Pomeranian is experience one or a couple of these, it’s likely your Pomeranian doesn’t have Cushing’s disease. However, if you see a handful of these symptoms in your Pomeranian and they’re above the age of one, you’ll definitely want to contact your local veterinarian immediately.

If your vet is uncertain about any of the previous test results, they can also detect Pomeranian Cushing’s disease by running what’s known as an ACTH stimulation test as well as an abdominal ultrasound. These tests can help pinpoint where exactly the disease in your Pomeranian is coming from, be it from a tumor in your Pomeranian’s adrenal or pituitary glands, as well as whether the tumor is benign (not spreading) or malignant (spreading).

What Causes Cushing’s Disease in Pomeranians?

Knowing the most common symptoms and how to detect whether your Pomeranian has Cushing’s disease is vitally important. However, it’s also important to know where it comes from so you have a better understanding of the disease and how it came to be present in your Pomeranian.

As I mentioned before, Cushing’s disease (or hyperadrenocorticism) is a naturally occurring disease resulting in high and prolonged levels of cortisol circulating through your Pomeranian. Cortisol is an extremely important hormone found in dogs, cats, and even humans, and is commonly known as a “stress hormone” that’s triggered in “fight-or-flight” and other scenarios.

Since Cushing’s disease is a result of abnormal levels of cortisol pumping throughout your Pomeranian’s body, they’re effectively in a state of stress and anxiety for no reason other than a hormonal imbalance in their endocrine system, more specifically either in their pituitary gland or adrenal glands.

About 80-85% of all Pomeranians and other dogs diagnosed with Cushing’s disease are found to have high levels of cortisol due to a tumor located in their pituitary gland, which is located at the base of your Pomeranian’s brain and is about the size of a pea. The pituitary gland is commonly referred to as the “master gland” since it produces many hormones that travel throughout the body.

As you might have already guessed, the other 15-20% of all Pomeranians and other dogs diagnosed with Cushing’s disease are found to have a tumor located in their adrenal glands, which are located above your Pomeranian’s kidneys. Depending on the severity of your Pomeranian’s diagnosis, there may be a tumor on top of both kidneys. The adrenal glands are known for producing various hormones, more notably adrenaline, aldosterone, and cortisol.

The tumors that form around one of these two sets of glands are most often found to be benign, which means the tumor is stable and not spreading. However, it can be the case that the tumor is malignant (or spreading), resulting in a potentially fatal outcome. Fortunately, it’s quite rare for tumors that produce Cushing’s disease in Pomeranians and dogs to be malignant, so that’s good news!

Cushing’s disease in Pomeranians and other dogs is virtually always the result of a natural occurrence that’s, unfortunately, unavoidable for some. However, it can also be the result of excessive use of certain medications that treat common health problems in dogs, which means you should double check with your vet before administering any new medications for your Pomeranian.

Prescription corticosteroid medications used at high doses for a long period of time have been found to cause Cushing’s disease in dogs, which is very unfortunate. These medications usually treat common health problems including allergies, immune disorders, and even cancer. These corticosteroid medications are quite effective at reducing inflammation and as a way of leveling out low cortisone levels in dogs. Thankfully, “medication-caused” Cushing’s disease can be reversible by either reducing or completely stopping the use of these medications.

Being able to understand Pomeranian Cushing’s disease symptoms, diagnoses, and causes is incredibly important in pinpointing the disease and its origins, but that’s just the beginning. Moving forward by properly treating your Pomeranian’s Cushing’s disease is the very next step, and luckily there are several ways to go about it.

By far the most common and least intrusive ways of treating Cushing’s disease in Pomeranians is through the use of prescription oral medications. By simply giving your Pomeranian a tablet, chew, or drop of their veterinary-prescribed medication, you’ll be able to keep their symptoms at bay.

When treating Cushing’s disease in Pomeranians through the use of oral medications, it’s vitally important that you take your Pomeranian to the vet on a regular basis so they can get their blood tested. Depending on the results of these tests, your veterinarian may adjust the dosage of your Pomeranian’s medication.

Unfortunately, there are some common side effects when using Vetoryl, including reduced appetite, vomiting, lethargy, diarrhea, and weakness. Less common side effects include bloody diarrhea, collapse, sodium and potassium imbalance, destruction of the adrenal gland, and even death. None of that sounds good at all.

The only way to truly “cure” any disease that’s caused by a tumor is to completely remove it, which includes killing it with radiation. While the use of radiation therapy on your Pomeranian might seem like overkill, their grade of Cushing’s disease and whether their tumors are benign or malignant will likely determine the level of severity.

Through the use of radiation therapy, you can effectively zap away the tumor that’s present in your Pomeranian. While this will certainly bring on a number of side effects that aren’t pretty, your Pomeranian could come out even strong if the tumor is completely removed, resulting in your Pomeranian’s Cushing’s disease to cease to exist.

If your Pomeranian’s tumor is benign and hasn’t spread outside of the pituitary gland or adrenal gland, then surgery could be a great solution. Of course, any form of surgery has risk involved, elongated recovery times, and high financial costs. There’s also no guarantee the tumor won’t grow back, but it might be worth removing it either way.

Pomeranians that are diagnosed with Cushing’s disease are not as uncommon among the Pomeranian community and are often diagnosed with a pituitary-dependant, benign (not spreading) tumor. For that reason, it’s quite often the case that Pomeranian parents will avoid any risk health side effects related to radiation therapy and surgery, and instead focus on simply reducing their Pomeranian’s symptoms through the use of prescription oral medications as well as natural supplements.

While oral medications prescribed by your veterinarian can be highly effective, many people also choose to opt for using supplements specifically aimed at helping reduce stress, anxiety, and, thus, cortisol levels in their Pomeranians. Whether you choose to use calming supplements with or without oral medications, there are certainly plenty of supplement options for you to choose from, especially if you want to avoid any nasty side effects from oral medications.

Putting your Pomeranian through radiation therapy and surgery when treating Cushing’s disease in Pomeranians can cause more problems than they solve. And the use of some of the oral medications prescribed by veterinarians can come with some awful side effects which can be easily avoided through the use of effective adrenal support supplements

For these reasons, I want to share with you some of the adrenal support supplements that have helped the Pomeranian and dog community as a whole to effectively treat the symptoms of their dogs’ Cushing’s disease.

Some of the best pet supplements out there come from Pet Wellbeing and that especially goes for the Pet Wellbeing Adrenal Harmony Natural Support Drops (link to read reviews on Amazon). Apart from the strong and well-trusted brand that is Pet Wellbeing, these drops are specifically designed to tackle your Pomeranian’s adrenal dysfunction and cortisol imbalance.

With this holistic, vet-formulated supplement you’ll be well on your way to treating the symptoms your Pomeranian’s experience under Cushing’s disease. Through the use of purity tested, organic ingredients, these adrenal support drops are shown to support normal thirst, urination, weight, appetite, hair growth, and skin strength. You can’t go wrong with Pet Wellbeing, which is why they offer a 100% money back guarantee!

There aren’t too many top brands that produce an effective supplement for treating the common symptoms found in Pomeranians with Cushing’s disease. However, PetAlive Cushex Drops Adrenal Gland Balance Supplement (link to read reviews on Amazon) are at the top of the list based on their overwhelming customer satisfaction and effective product.

These adrenal support drops by PetAlive are exactly what your Pomeranian needs for treating their Cushing’s disease symptoms. Through their scientifically selected natural herbs free from chemicals and preservatives, your Pomeranian will experience an improved endocrine system, increased energy, optimal skin health, and much more. These drops by PetAlive have become increasingly popular among the community, so you should definitely check them out.

Another amazing brand that creates some of the best dog supplements out there is Fur Goodness Sake (I love their name), which is why they’re on the list of the best adrenal support supplements for Pomeranians with Cushing’s disease. If you haven’t taken a look at the Adrenal Support Cushing’s Treatment for Dogs by Fur Goodness Sake (link to read reviews on Amazon), go take a look when you get a chance.

These adrenal support supplement drops are highly effective at maintaining normal kidney and adrenal function in your Pomeranian through the use of a proper mix of powerful herbal extracts. Their clinically proven herms help to gently and safely restore healthy adrenal function while reducing the unpleasant symptoms experienced by your Pomeranian. This 100% herbal remedy will help your Pomeranian get back to their normal self if they’re suffering from Cushing’s disease!

This veterinarian recommended adrenal support Cushing’s supplement is packed with organically grown ingredients that have been third-party tested for 100% purity. Their unique blend of organic herbs has shown to restore balance in the endocrine system of many dogs, resulting in a reduction of the most common symptoms found in Pomeranians with Cushing’s disease. It’s also 100% made in the USA without the use of GMOs, herbicide, or chemical fertilizers!