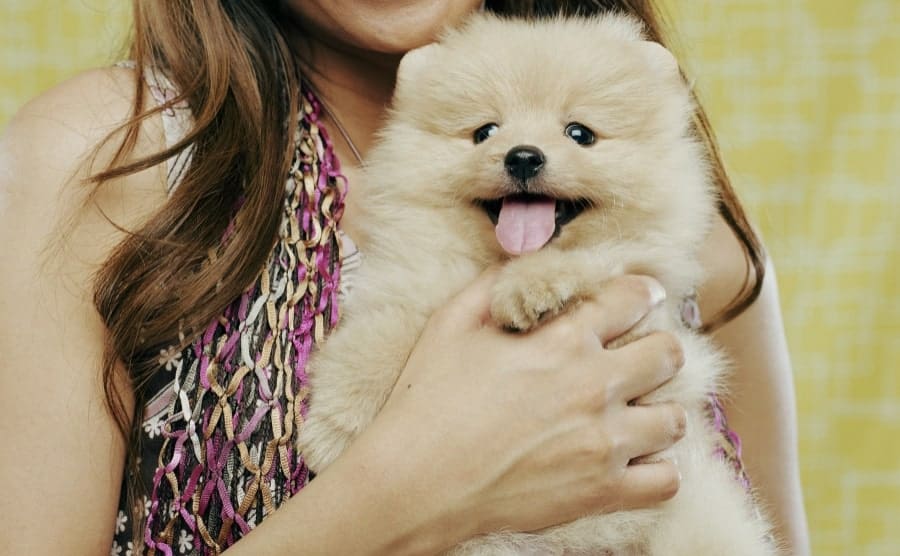 As a novice pet owner, one of the things that scared me the most was seeing my dog breathing fast. You might be feeling the same if you’ve noticed that your Pomeranian pants heavily from time to time and don’t know if it’s normal.

So, why is my Pomeranian breathing so fast? Panting is normal for Pomeranians in some situations, such as when they’re tired, hot, or excited. However, if your Pom breathes fast frequently, they might have a medical problem that needs urgent treatment.

Since Pomeranians might breathe fast for many reasons, we’re going to take a look at the most common ones. So, keep on reading.

Why Is My Pomeranian Breathing so Fast?

What do you do after you’ve run several miles or done a strenuous exercise? You need a minute to catch your breath. The same thing happens with your Pomeranian.

Since Pomeranians are tiny, it doesn’t take much to exhaust them and make them pant heavily for a couple of minutes. Your Pomeranian might be out of breath after a brisk walk or a game of catch, for example.

Usually, your Pomeranian will get their rapid breathing under control once they slow down and rest. Also, you should get your Pomeranian a no-pull dog harness for your next walk. But if your Pomeranian continues panting excessively for a long period after exercising, it might be something else.

Do you know that Pomeranians sweat through their paws? They don’t have the same sweat glands as we do and need to pant to regulate their body temperature.

So your Pomeranian might breathe fast to cool their bodies and regulate their temperature. However, heavy panting might also be a sign of heat exhaustion or a heat stroke.

Since Pomeranians are small and have a thick, double coat, they’re prone to overheating in a hot climate. Heavy panting and trembling that doesn’t go away when resting is a red flag. Other signs include drooling, seizures, and weakness.

Don’t assume that your Pom is fine if you don’t feel the heat. Imagine wearing a thick double coat that you can’t take off, and you’ll understand how your Pomeranian feels in summer!

If you think that your Pomeranian is too hot, take them to a shady place as soon as possible to avoid heat stroke. Offer your Pom water and place a wet towel on them to cool them off. Then call your vet.

Do you remember being a child and getting so excited about something that you can’t keep still? Pomeranians are a lot like small children and might hyperventilate (breath fast) when they’re overly excited and happy.

Usually, Pomeranians act that way when you come home from work. They’ve missed you so much that they can’t contain their joy and might run around or jump into your arms to express their feelings. All of these can make your Pomeranian pant for a while.

The good news is that your Pomeranian should return to normal after you calm them down. However, if you’re worried about your Pomeranian’s rapid breathing, take a video and show it to your vet. He will tell you if it’s overexcitement or something else.

4. Fluid in the Lungs

Another serious reason why your Pomeranian breathes so fast is pulmonary edema. In this condition, an abnormal amount of fluid accumulates in your dog’s breathing sacs, which reduces your Pom’s breathing capabilities and makes them pant heavily.

Pulmonary edema might be due to heart problems, smoke inhalation, drowning, and trauma. Besides fast breathing, watch for:

Just like people, Pomeranians can suffer from heart problems that can affect how their breathing, and can possible lead to congestive heart failure.

If your Pomeranian has heart failure, the body doesn’t have enough oxygen because the heart isn’t working effectively. As a result, your Pomeranian might breathe faster to make up for the low levels of oxygen.

Besides heart disease, an enlarged heart might also lead to breathing problems. That’s because it might press upon the lungs and obstruct your Pomeranian’s breathing.

Some Pomeranians are also born with a heart defect, and abnormal breathing might be your first indication that something is wrong. Other signs of heart disease are exercise intolerance, persistent coughing, high blood pressure, and bluish gums.

As a breed, Pomeranians are prone to a collapsed trachea which can cause excessive panting. This condition develops when your Pomeranian’s windpipe cartilages get soft. As a result, the trachea can’t keep its shape and narrows.

Depending on where the collapse occurs and its severity, your Pomeranian might have breathing difficulties or exhaling air. You might notice that your Pomeranian breathes fast or that they’re often coughing.

If you notice your dog breathing fast while walking them, you should definitely consider getting a no-pull dog harness.

Since a collapsed trachea might lead to lung and heart problems, you should treat it as soon as possible.

Toxic substances are another reason why your Pomeranian might breathe fast. For example, inhaling something poisonous can damage your Pomeranian’s airway and cause heavy panting. But swallowing toxic food can also lead to labored breathing.

Since Pomeranians are curious dogs, they might grab a bite off your plate and end up in a lot of problems if they eat onions or garlic, for example.

Chocolate is also very dangerous for Pomeranians since it causes tremors, agitation, and heart problems. Pomeranians are tiny, so they don’t have to eat much chocolate or onions to fall ill. Keep it away from them.

Any respiratory infection or disease, be it viral or bacterial, can affect your Pomeranian’s breathing and make it difficult and labored. That’s because infections inflame and narrow your Pomeranian’s airways, which reduces their ability to breathe.

Usually, respiratory distress and infections have other warning signs, such as nasal discharge, frequent coughing, watery eyes, fever, and lack of appetite.

You should take your Pomeranian to the vet if you suspect that they’ve got a respiratory disease. Even minor infections can progress to pneumonia or kennel cough if left untreated. Moreover, some are contagious and might infect your other dogs.

Your Pomeranian can’t tell you when they’re in pain. Instead, they show it in various ways. So, if you notice that your Pomeranian is breathing fast, they might be injured and in great pain.

Unfortunately, Pomeranians are prone to injuries because they’re small and can fall badly even from your bed or sofa. Look for other signs of trauma and pain, such as frequently biting/licking the injured part, fast heart rate, and enlarged pupils.

Not all trauma is visible, so you shouldn’t delay a trip to the vet if you think that your Pomeranian is in pain.

When you’re under stress, afraid, or anxious, you might have difficulty breathing. Just think about the last time something scared you senseless and how you needed a couple of minutes to catch your breath and calm your heart.

Well, the same things can happen to your precious Pomeranian. Stress and anxiety increase your Pomeranian’s heart rate, which increases the demand for oxygen because the heart is pumping more blood than usual.

Another reason for heavy breathing in Pomeranians is a side effect of medications. For example, if your Pomeranian has asthma or other inflammatory conditions, they might breathe faster than normal.

In these cases, you should talk to your vet about the possible side effect of your Pom’s medication and what you have to look for.

If your Pomeranian has Cushing’s disease, their body makes too much cortisol. Usually, the body releases cortisol in response to stress to engage the flight or fight instinct. However, it also reduces inflammation, controls the blood pressure and blood sugar, and regulates your Pom’s metabolism.

However, too much of this hormone is bad because it leads to heavy panting, skin infections, and increased thirst, appetite, and urination.

It’s not easy to tell you why your Pomeranian is having breathing difficulties and panting heavily because it might be something simple (exercise exhaustion/overexcitement) or a life-threatening heart condition (heart failure).

Thus, any sudden change in your Pomeranian’s breathing should prompt you to speak to your vet. That’s really the most important thing we can do as pet parents.