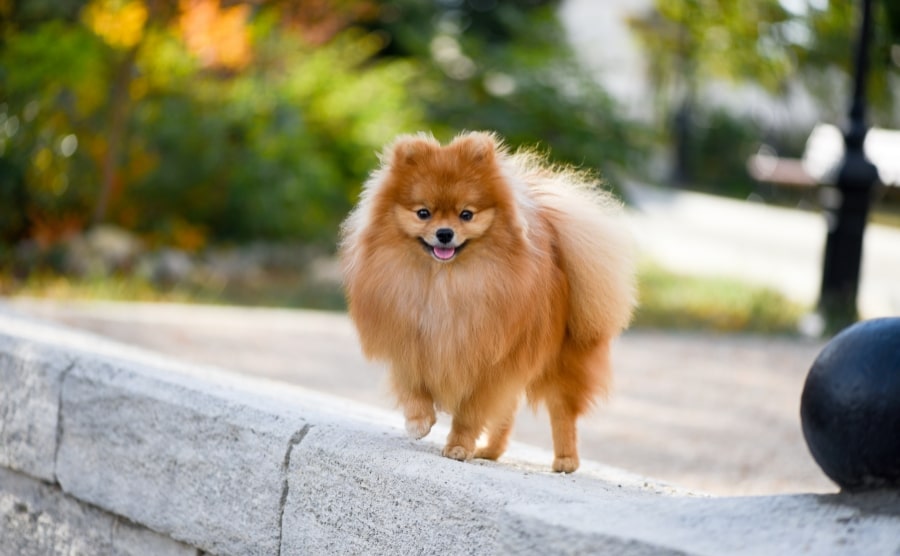 Are you wondering if your Pomeranian is old enough to breed? You might if your female Pom has gone into her first heat or your male Pomeranian is humping and mounting everything in your house.

So how can you tell that your Pomeranian is ready for breeding and how many litters a Pom can have? Keep on reading to find out.

What Factors Determine When a Pomeranian Is Ready to Breed?

Picking the right age to breed your Pom is not as easy as it sounds because you should take other factors into account besides their age. I’m talking about maturity, weight, and health.

1. Your Pomeranian Should Be an Adult

Usually, female Pomeranians reach sexual maturity between the ages of six and nine months old and go into heat for the first time. However, some Pomeranians might have a heat cycle as young as four months and get pregnant.

Despite AKC’s breeding standards on how old a Pomeranian has to be to breed, most breeders consider an 8 month old Pomeranian to be too young. That’s because neither females nor males have reached adulthood.

In addition to this, most respectable breeders don’t endorse pregnancy during the first heat cycle because it’s risky for the mother and the puppies.

Instead, most breeders prefer to breed their Pomeranian when she’s at least two years old. A 2 year old Pom is still young enough to give birth without complications and has already matured into adulthood.

2. Your Pomeranian Should Weigh Enough

Weight also plays a large role in determining how old your Pomeranian has to be to breed. One of the rules is that male Pomeranian should never weigh more than 3 pounds over the female.

It’s acceptable for female Poms to be bigger than the males, but not the opposite. So, even if your female Pomeranian is 8 months old, you might have to wait for her to put on some weight before breeding her.

In addition to this, your Pomeranian should match the standard weight of the breed. According to the AKC breed standard, Pomeranians weigh between 3 and 7 pounds. Dogs who weigh less than that shouldn’t breed because they aren’t going to produce healthy litters.

3. Your Pomeranian Should Be Healthy

As a whole, Pomeranians are a healthy breed, but they’re predisposed to certain genetic and hereditary conditions. So both female and male Pomeranians should have a full physical examination before breeding to check for such diseases.

In case your female or male Pomeranian has a hereditary condition, you shouldn’t breed them. Breeding aims to improve the breed and eradicate such preventable diseases.

How Often Can You Breed Your Pom?

Now that you know how old a Pomeranian has to be to breed, you probably wonder how often you can breed your female and male Pomeranian.

Female Pomeranians come into heat twice or thrice a year on average. Most breeders prefer to breed their female Pomeranian every other cycle so that their female can have enough rest between litters. Others breed two consecutive cycles and then let their Pom rest for one.

Keep in mind that these are general guidelines. It all depends on how well your Pomeranian handles pregnancy and birth.

Some Poms need a C-section to deliver successfully, and those will need extra rest before they’re ready for another litter. Other pre-birth and post-birth complications also influence the frequency of breeding.

While a male Pomeranian can mount females several days in a row, most breeders frown upon daily breeding. It exhausts the breeding pair and reduces the sperm’s quality of the male Pomeranian. As such, it lowers the chances of a successful pregnancy.

That’s why you should give your male Pomeranian at least a day between breeding to ensure good sperm quality.

How Many Litters Can a Pomeranian Have?

Depending on how frequently you breed your female Pomeranian, you can have 1 or 2 litters per year.

But according to American Kennel Club’s litter registration rules, you can register only 4 litters per female. You might breed more, but they won’t be registered. That rule aims to avoid overbreeding and exhausting the female Pomeranian.

On the other hand, male Poms can produce numerous litters of healthy puppies during their lifetime.

The AKC doesn’t have a limit on how many litters your male Pom can sire. But breeding a male too often results in the popular sire syndrome. Since breeders are looking for the best to improve the breed, they might choose the same male Pom due to his outstanding qualities.

As such, the same male might impregnate many female Pomeranians. While it stands to reason to choose the best male Pom, it often leads to a reduction in gene diversity and increases the chances of offspring inbreeding.

When Is My Pomeranian Too Old to Breed?

While Pomeranians have to be old enough to breed, they also reach an age where they become too old for mating.

Unlike other species, female Pomeranians don’t experience menopause. That means that they can continue to give birth for the better part of their lives. However, after a certain age, pregnancy becomes too risky for the mother.

Most breeders prefer to retire their female Pomeranian at the age of 7 or 8 on average. However, the more birth complications and difficult pregnancy your Pomeranian has, the earlier you might have to stop breeding her.

You have to discuss the matter with your vet. He is the best person to say whether your Pomeranian is too old to have puppies.

Once you retire your Pomeranian, most specialists recommend that you spay your female Pom. Otherwise, your Pomeranian will continue to go into heat and might accidentally get pregnant.

As for male Pomeranians, they can sire healthy litters for most of their lives. However, the older your Pom gets, the more difficult it will be to get a female pregnant. That’s become the sperm count decrease with age and becomes less viable.

When you have to decide the matter, you should take into account your male Pom’s overall health and your vet’s opinion. Usually, once your Pom starts to sire fewer puppies than before or exhibits less interest in mating than before, it’s time for retirement.

You’re going to read a lot of different opinions on how old a Pomeranian has to be to breed. But you can make the right decision by considering Pom’s overall health, maturity, and weight. That’s the best way to ensure that you’re going to breed a healthy litter of cute Pomeranians.