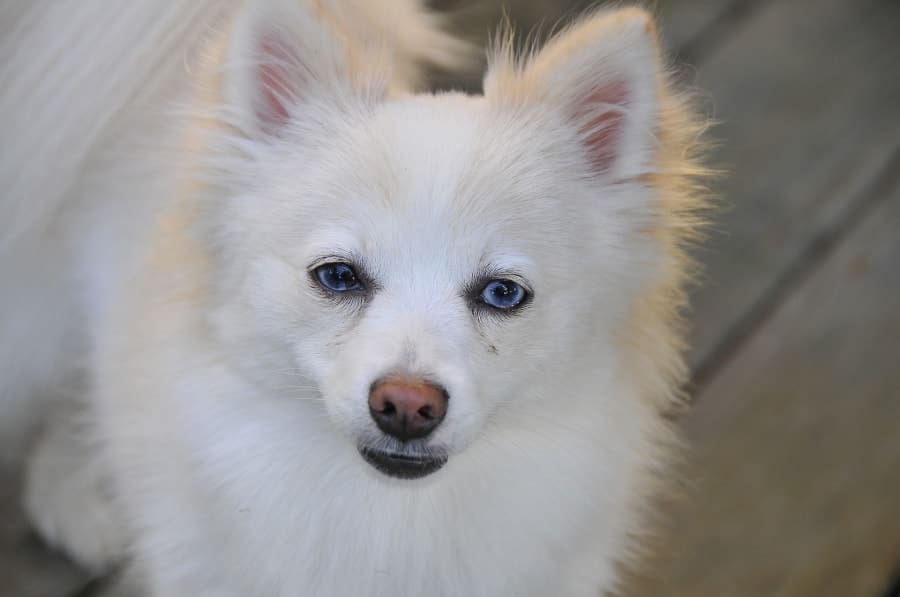 Sometimes I catch my Pomeranians panting and breathing heavily, even when they’re completely inactive. I’ve always been curious why, so I decided to get to the bottom of it to get my Pomeranian panting issues explained.

So why do Pomeranians pant so much? Apart from being the result of general exercise, common causes to heavy panting in Pomeranians include:

These are by far the most common reasons for a Pomeranian panting a lot, but there are far more details to consider. Keep reading to find out how to spot the reason why your Pomeranian pants so much (or even breathing too fast).

Why Do Pomeranians Pants so Much

Whenever I see my Pomeranians playing in the backyard or running around the house, they always seem to finish off with a big drink of water and heavy panting. Pomeranians have a huge extrovert personality, so expending a lot of energy comes with the territory of being a Pomeranian.

While it’s completely normal to see your dog panting after an exercise or a moment of excitement if the panting persists then you should ask yourself “why?”, especially if the weather is exceptionally warm.

Overheating is probably the most common reason for a Pomeranian to have excessive panting episodes. Historically, Pomeranians come from a long line of Arctic working dogs, which required thick double fur coats and thick ones at that. These coats are the inner coat and the outer coat allowing your Pomeranian to have a healthy body temperature.

The inner coat is very dense and has the main purpose of holding in your Pomeranian’s warmth. The outer coat is lighter and more sparse while having the purpose of brushing off environmental debris and protecting the inner coat.

Collapsed tracheas in Pomeranians is by far one of the most common Pomeranian breathing issues. A collapsed trachea is essentially when the surrounding cartilage of a dog’s windpipe starts to degrade and fall apart, resulting in a smaller airway for your Pomeranian from which to breathe.

This can definitely cause your Pomeranian to pant a lot, so keep an eye on your Pomeranian’s breathing. That’s why it’s necessary to get a dog harness that won’t strain your dog’s throat.

Enlarged hearts are a Pomeranian health issue that pops up from time to time and wouldn’t be classified as uncommon. One of the main reasons this can occur is when your Pomeranian has patent ductus arteriosus, which is like a heart murmur. If you suspect this could be the reason for your Pomeranian’s heavy panting, you most definitely want to speak to a veterinarian as soon as possible.

Other reasons for your Pomeranian panting so much is that they have fluid in their lungs, pneumonia, high blood pressure, Cushing’s disease,, or are simply obese. Maybe your Pomeranian caught something from another pet or is just simply overeating. Either way, these are all addressable issues and can be solved by a quick trip to your local veterinarian.

Reducing the heavy panting from your Pomeranian can be as simple as giving them a haircut. Our Pomeranians are extremely cute when puffy. They know it, too! However, this can cause an overheating in your Pomeranian’s body temperature, causing them to pant heavily. The same goes for wearing any clothes that could cause your Pomeranian to be warming than normal.

If your Pomeranian has an enlarged heart, then it’ll be difficult to reduce the panting. Honestly, the only way to fix your Pomeranian from panting too much under this circumstance is to seek medical advice from a veterinarian.

It’s likely they would suggest surgery, which we all know has its risks. In this case, you should find out if your Pomeranian is in pain or heavy discomfort so as not to jump too soon for surgery.

A common method to reduce the discomfort of a Pomeranian that has a collapsed trachea is to walk them using a no-pull dog harness instead of a collar. We all know how eager Pomeranians can be to jump into action during a walk, resulting in them tugging on their lease. With that in mind, a harness may help in reducing the panting of your Pomeranian.

Obesity can a problem with Pomeranians for multiple reasons. The first is that they’re so adorable that we want to give in to them whenever they beg for food. Another is that small breed dogs have a lower metabolism when compared to larger breeds.

What that means is that it’s important to only feed your Pomeranian as much as they need. Obese Pomeranians commonly have difficulty breathing, so in my book, exercise is an easy way to reduce your Pomeranian from panting too much.

Is the Panting More Than Normal?

Seeing our Pomeranians pant too much or breathe too fast is discomforting. If they’re playing and having fun, it makes sense that they should be panting heavily. However, in the situation that your Pomeranian is panting while just sitting around, eating, or another relaxed activity, this should raise a red flag and requires some more explanation.

A Pomeranian at rest stays at rest. If your Pomeranian is breathing or panting excessively while in an inactive state, that’s definitely abnormal panting. If you see that they’re happy and really excited, it makes complete sense that they might breathe more than normal. In this case, it’s important to take notice the breathing patterns of your Pomeranians whenever they’re just lounging around. It’s amazing what you can notice in times of Pomeranian quietness!

For example, one of my Pomeranians pants a lot due to a tracheal collapse, and I noticed it initially because he’d always stop playing with his brothers and sisters before everyone else. Of course, he’d be panting a lot after tapping out, which raised the red flag for me that there might be something wrong.

I also noticed that he’d be the first one to get so tired during a walk that I’d have to pick him up and hold him until we got home. Be aware that tiredness is most definitely a leading symptom of reasons why your Pomeranian is panting.

How the Weather Affects Pomeranian Breathing

As I mentioned before, Pomeranians come from a line of Arctic working dogs, more specifically the German Spitz breed. This is why Pomeranians have thick double-fur coats that are big and dense. But under certain weather conditions, they could have an altered breathing pattern which could be a probable reason for why your dog pants so much.

If you live in a cold and humid climate, your Pomeranian can have similar problems to one living in a warm, humid climate. While they certainly won’t be overheating, the humidity can cause your Pomeranian to catch a lung disease like pneumonia, kennel cough, or even liquids in their lungs. You want your Pomeranian’s body temperature to be level and healthy.

Under these circumstances, it’s most certainly warranted to throw a coat or sweater on your Pomeranian to keep them warm especially if you’re walking them (ideally with a no-pull dog harness). Not only will this encourage healthy lungs, body temperature, and immune system in general, but they’ll look amazingly cute!

Do Pomeranians snore? Pomeranians snore just like any other dog. Because Pomeranians can be prone to certain breathing issues, it’s not uncommon for this to result in snoring. The main reason for snoring is because they are potentially overweight.