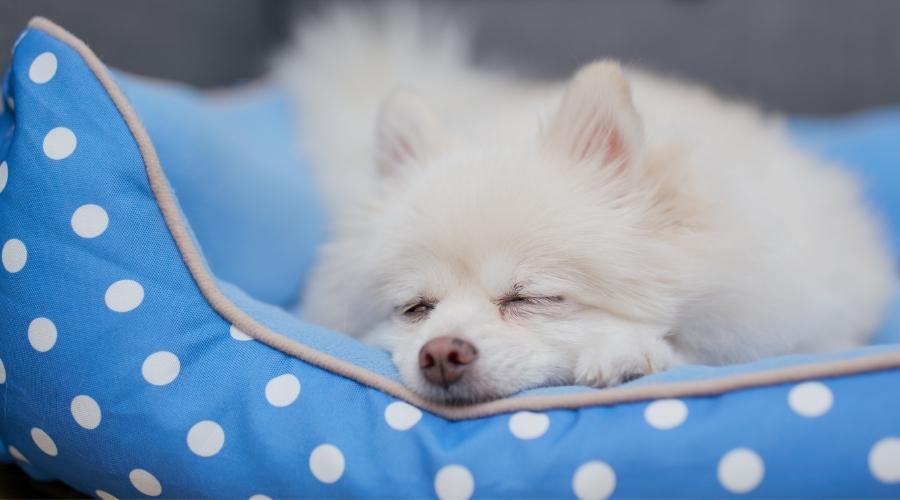 Pomeranians often breathe heavier while sleeping due to their shorter snouts or having exciting dreams. However, if you notice that your dog is consistently struggling to breathe, it’s important to take them to the vet for further examination as they may have some respiratory problems and other health issues.

In this guide, we’ll cover the most common reasons why your dog breathing heavily while sleeping and how you can help get it back to a healthy slumber. So without further ado, let’s get started!

4 Reasons Why Your Pomeranian’s Breathing Heavily While Sleeping

Did you know that dogs dream just like we do? It’s true! And just like us, they might start to breathe heavier while they’re in the midst of a dream. So, if your Pomeranian is suddenly snoring or breathing heavier than usual while sleeping, it’s likely that they’re just dreaming.

Dreams are caused by electrical impulses in the brain that are interpreted as images, sounds, and other sensations. Dogs usually dream about activities they enjoy or have done recently, such as playing fetch or going for a walk.

The sleeping cycle is divided into two phases:

The first stage of sleep your Pom encounters is called SWS (or slow wave sleep), during which brain activity appears sluggish and undefined. Although muscles are still tense, the body isn’t completely at ease. Your dog might look like he’s resting peacefully but can be woken up quite easily during this phase.

As the night progresses, a deeper level of sleep is achieved by your Pom, characterized by rapid eye movements. This stage is known as REM sleep, during which the brain waves are more rapid and chaotic. Pomeranians usually enter the REM cycle 20-30 minutes after falling asleep and have dreams during this phase.

It’s typical for your Pom to begin breathing rapidly and perhaps whimper or bark softly during the Rapid Eye Movement (REM) stage of sleep. This is because his neurological system is highly active, allowing them to move about in his dreams without having an actual walk. If your dog has a dream in which it appears to organize memories and Make connections with past experiences throughout the day like:

Your Pom could just be reminiscing about it!

The length of time spent in REM, however, varies considerably among canines. Most dogs spend no more than 5-20 additional minutes in the REM phase before settling peacefully into the Non-Rapid Eye Movement (NREM) stage.

In essence, it’s quite typical for a dog’s heart rate, respiration, and body temperature to accelerate during REM sleep and these are the reasons why healthy sleeping Pomeranian dogs breathe fast.

As we mentioned before, Pomeranians are brachycephalic dog breeds. This means that they have shortened skulls, noses, and airways in proportion to the rest of their body. This can cause some respiratory difficulties like panting, wheezing, rapid breathing, fand snoring while sleeping or even in their daily routine–which is perfectly normal.

During sleep, your dog’s brain is still active and needs oxygen to function. But because their airway is obstructed, they have to work harder to get the oxygen they need, which can cause them to snore or breathe heavily.

If your dog is carrying around excess weight, it can make it harder for them to breathe, especially when they’re lying down. When a dog is obese, its chest and abdominal cavity are constricted, which puts pressure on the lungs and makes it difficult to expand them fully. This can cause your dog to start panting and breathing heavier than usual.

If you think your Pomeranian might be overweight, it’s important to take them to the vet for a check-up. They can help you determine if your dog is at a healthy weight and give you some tips on how to help them lose any excess pounds.

There are a few health-related issues that could be the cause of your Pomeranian breathing heavily while sleeping:

Are Puppies Supposed to Breathe Fast While Sleeping?

Puppies, like all young animals, need more sleep than adults. They can spend up to 18-20 hours a day sleeping, which means they’re going to be taking a lot of naps. It’s perfectly normal for puppies to breathe fast while sleeping since their bodies are still growing and developing.

There can be two normal major reasons for your dog breathing fast while sleeping except for any health issue.

Puppies are more inclined to spend more time in REM sleep than adult dogs since they are continuously processing new things. When puppies are this young, it’s quite typical for them to have rapid breathing while sleeping.

Puppies grow rapidly, which means their bodies are working hard to develop. This can cause them to breathe faster than normal since their bodies need more oxygen to support all of the growth that’s taking place.

How Many Breathes per Minute Are Normal for Pomeranians?

The average number of breaths per minute for a dog at rest is between 10 and 30. But this number can increase depending on the age, activity level, and health of your dog.

Puppies typically have fast breathing rates than adult dogs since they’re still growing and developing. It’s not unusual for a puppy to take 15-40 breaths per minute.

How to Prevent Your Pomeranian Breathing Heavy While Sleeping

There are a few things you can do to help prevent your dog’s breathing difficulties while sleeping:

1. Keep Them at a Healthy Weight

If your dog is carrying around excess weight, it can put a strain on its respiratory system and make it harder for them to breathe. Keeping your Pomeranian at a healthy weight is one of the best things you can do for their overall health–including their breathing.

2. Avoid Smoking Around Them

Passive smoke can irritate a dog’s lungs and make it difficult for them to breathe. If you smoke, it’s best to do it outside and away from your dog. This is especially true if your Pomeranian has asthma.

If your Pomeranian’s sleeping area is full of dust or other allergens, it can aggravate their respiratory system and make it difficult for them to breathe. Keeping their sleeping area clean and free of allergens is crucial for their breathing health.

Exercising in hot weather can increase your dog’s normal body temperature and put a strain on its respiratory system. If it’s hot outside, stick to shorter, less intense exercises or wait until the cooler hours of the day to walk or play with your dog.

5. Take Them to the Vet Regularly

Regular check-ups with the vet can help identify any potential respiratory issues early on and get your Pomeranian the treatment they need.

How to Reduce Your Pomeranian’s Panting

In the long run, the best way you can reduce your Pomeranian’s panting is by ensuring they stay healthy and fit. A healthy dog is less likely to experience respiratory problems that could lead to heavy panting.

Here are some tips for keeping your Pomeranian healthy:

Haircut and Unclothing Your Pet

A lot of times, long-haired dogs pant to keep cool because they can’t sweat like humans. If your Pomeranian has a rapid breathing rate, you may want to consider giving him a haircut or unclothing him during hot weather.

Use a No-Pull Harness

If your Pomeranian pants heavily when they’re on walks, it could be because they’re pulling on the leash. This can put a lot of strain on their respiratory system and lead to panting.

To reduce strain on their lungs, consider using a no-pull dog harness. This type of harness puts pressure on the chest instead of the neck, which can help to reduce pulling.

It’s important to make sure your Pomeranian gets regular exercise to maintain a healthy weight and keep their lungs and heart healthy. A 30-minute walk or play session each day should be enough to keep your dog in good shape.

Feeding your Pomeranian a healthy diet is also important for maintaining their health. Make sure they’re getting plenty of lean protein, healthy fats, and complex carbs. And avoid giving them too many treats or table scraps.

If you’re concerned about your Pomeranian’s panting, it’s always best to consult with a vet. They can help you determine if there’s an underlying health issue that needs to be addressed.

If it’s hot outside and your Pomeranian has a fast breathing rate or they’re having difficulty breathing, take breaks often it will give them a chance to cool down and avoid heat stroke. Find a shady spot to rest in and offer them water regularly. And if they seem to be struggling, don’t hesitate to head back home.

If your Pomeranian is panting heavily after exercise, it’s important to monitor its activity level. They may be pushing themselves too hard and need to take a break.

Let them rest for a few minutes before continuing their exercise routine. And if they’re still panting heavily, it’s best to call it quits for the day.

It’s normal for your Pom to dream and breathe heavily during sleep, but if your Pomeranian is persistent heavy breathing or having any difficulty breathing, it’s important to speak to your vet right away.

This could be a sign of anything from exhaustion to a life-threatening condition (respiratory infection, heart disease, etc) so it’s always better to be safe than sorry.