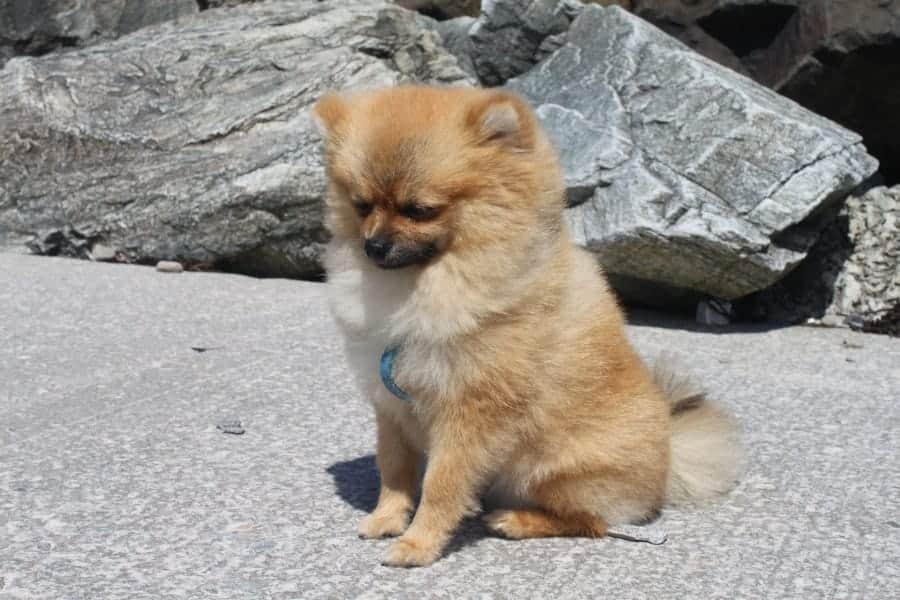 All of my Pomeranians seem to be of different size once they finished their puppy years, but it was always hard to tell when they would stop growing. After doing a little research, I found out when Pomeranians stop growing.

Now there are lots of factors that go into how Pomeranians grow the way they do, especially when it comes to genetics, environment, and food. Do you know if your Pomeranian reached the size they were meant to be?

When Pomeranians Are Full Grown

Pomeranians are some of the cutest dogs on the planet for many reasons, but one is definitely due to their size. Like the little puffy balls of energy that they are, they grow to their full size at about the age of 1. However, there are several growth stages that Pomeranians go through before they reach their final size.

Most newborn Pomeranians are incredibly small when they enter the world. As a matter of fact, they’re so small that you can easily hold them in your palm. When Pomeranians are just born, they usually weigh only a few ounces. This is incredibly tiny, but it surely won’t last long. At this stage of growth, Pomeranians will double in size within a few days and will continue to grow at a rapid pace until about 8 weeks old. At that age, they enter a new stage of growth when they officially become puppy Pomeranians.

Once a Pomeranian enters the puppy stage of growth at 8 weeks old, they’ll begin to grow at a lower rate than they did when they were newborns. However, at this stage, they’ll grow the most overall. As a matter of fact, this stage lasts up until they’re 1 year old, which is when they officially become adult Pomeranians.

You’ll mainly see your Pomeranian grow in terms of width and height while they start to lean out a bit in their body. Throughout the puppy stage, you’ll see bursts of growth from time-to-time while experiencing several pauses along the way. Don’t worry if you witness this happening as it’s completely normal.

Some Pomeranians continue to grow past the 1-year mark, but this isn’t at all common. When it does occur, they’ll likely not show signs of growth in their height or width but more in the widening of their chest. Once Pomeranians reach the final stage of growth by entering adulthood, they’ll have lost the round puppy body look and have a more sleek and strong look to them.

When Pomeranians leave adulthood and enter their more senior, golden years, which happens at about 8 years old, they may appear to be a tad bit smaller than they once were. But don’t worry, they won’t shrink back down to newborn size. What’s happening at this stage of a Pomeranian’s life is that they’re not as active as they once were, so muscle density decreases and their coat may not be as puffy as it once was. Again, they aren’t shrinking, just slowing down a bit.

The Effects of a Pomeranian’s Growth

There are several factors that come into play when evaluating how much your Pomeranian is going to grow before becoming an adult. Generally, it’s out of our control how quickly they grow and at which weight and dimensions they’ll settle, but there are most definitely effects that alter these values.

Another important factor is nutrition. Feeding your Pomeranian the correct quantity and quality of food is very important in the final weight and size of your Pomeranian. You want to be very careful with what your Pomeranian eats, so make sure not to feed them any off-limits food, especially certain human food. I always suggest high-quality, natural food intended specifically for puppies and small breed dogs.

Optimal Weight for a Pomeranian

The weight of a Pomeranian greatly depends on each Pomeranian’s genetic makeup, of food eaten, quality of food eaten, exercise, and more. In general, Pomeranians should weigh between 3 and 7 pounds. Most Pomeranians will hover around the 6- to 7-pound mark while others will tend to be a little smaller.

However, some Pomeranians can weigh more at about 12 to 14 pounds. While I mentioned the various factors that affect the growth of Pomeranians, the most important one, in this case, is genetic. Actually, my Pomeranian named Elvis weighs close to 12 pounds and shows a noticeable size difference when compared to his brothers and sisters. And they’re older than him!

A Pomeranians weight is also dependent on their initial birth size. This is definitely a big factor, and, again, is mainly due to genetics. Actually, if you were to look at two Pomeranian newborns at birth and weigh them, the likeliness that the bigger newborn will be large than the other at adulthood is extremely high.

Some Pomeranians Are Bigger Than Others

The weight and size of your Pomeranian is generally going to fall in line with most other Pomeranians. However, there are times when Pomeranians are a bit smaller or larger than your average Pomeranian.

While not entirely common, Pomeranians can be as small as 2 or 3 pounds. This is rather tiny (even in Pom terms!), but it does happen. Most people will label a Pomeranian with this weight as a miniature, toy, or teacup Pomeranian, which is actually not an officially accepted breed.

Sadly for smaller Pomeranians, they tend to have a greater risk of health issues, which is a good reason why you should try to feed them well, provide them with enough exercise, and avoid them getting sick. While they may look incredibly cute at such small sizes, these are not the healthiest dogs to have, which is why good breeders won’t purposely breed tiny Pomeranians.

Now bigger Pomeranians are interesting. They can weigh between 12 and 18 pounds (sometimes even more!) and start to look more like wolves than domesticated dogs. Actually, it’s likely that these larger Pomeranians preserved a lot of their ancestral genes which has led to them being so much bigger than a normal Pomeranian.

As I mentioned before, Pomeranians come from a long line of Arctic working dogs originating mainly from several regions bordering Poland and Germany. These dogs worked a lot, so they had fairly large frames, denser bone structure, and much more muscle than today’s Pomeranian. Actually, some say they were between 2 and 3 times the size of your average Pomeranian. That’s a big Pom!

How many years does a Pomeranian live? Pomeranians can live to the ages of 12 to 16 years. The lifespan of a Pomeranian is heavily dependent on factors related to genetics, food quality, living environment, health issues, and exercise.