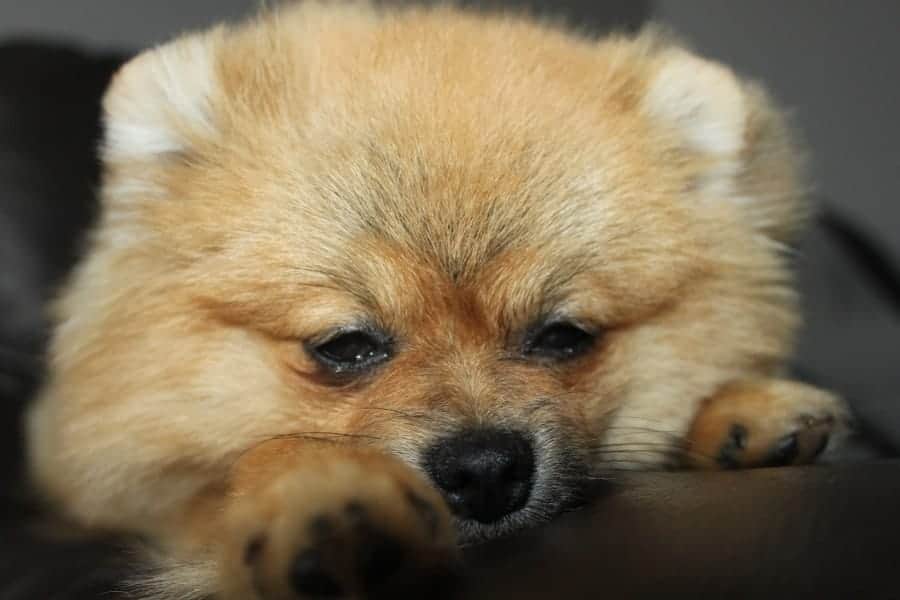 There are times when I thought my Pomeranians were sleeping either way too much or too little, especially when compared to how much (or little) sleep I actually get sometimes. Since it got me wondering, I decided to find out more and share it with you.

Now that’s a quick answer to a pretty important topic that truly affects the health of your Pomeranian. If you want to make sure your Pomeranian is getting good quality and adequate amount of sleep per day, you’ll definitely want to read on.

How Much Your Pomeranian Should Be Sleeping

Just like people, Pomeranians need sleep to regenerate their bodies and minds to be able to take on the days ahead. Being able to have the proper amount of energy to be as charismatic as any other Pomeranian definitely requires a good amount of sleep. However, you don’t want your Pomeranian to be sleeping too much, as that can be a sign of ill-health, boredom, or something potentially worse.

When your Pomeranian snoozes off to dream, they’ll periodically enter what’s called deep sleep, or rapid eye movement (REM), which is the mechanism us people and Pomeranians need to fully recharge our brains and bodies. Pomeranians require a lot of sleep relative to people, but it’s on par with other dog breeds.

As I mentioned, newborn Pomeranians, which are less than six weeks old, need anywhere between 20 and 22 hours of sleep per day. That seems like a lot and it is! The thing is that they’re just starting to learn how to walk, play, eat, drink, and everything in between, so it’s important that they’re able to rejuvenate themselves after a long day’s work. Also, be aware that a newborn Pomeranian will take, what seems like, a lot of naps throughout the day. Don’t worry, this is completely normal.

The next stage of a Pomeranian’s growth after being a newborn is being a puppy Pomeranian. These little guys are between six weeks and one year old, and they need between 18 and 20 hours of sleep per day. Clearly, they don’t need as much sleep as a newborn Pomeranian because they’ve gotten used to the life of a cuddly Pom. Also, just like newborn Pomeranians, puppies take quite a few naps throughout the day, so don’t be concerned if they seem like they’re always sleeping.

Entering adulthood for a Pomeranian occurs when they hit one year old and goes up to about eight years old. Once they hit this stage in their life, they’ll need anywhere between 12 and 14 hours of sleep per day. Now once they’re adults, they should be sleeping the majority of their time during the evening when you’re sleeping. This adds up to about seven to eight hours per day plus some napping here and there throughout the day.

The golden years of a Pomeranian really kick in once they hit eight years old. While they won’t be eligible for AARP anytime soon, they’ll certainly get plenty of nighttime sleep and afternoon naps. You can expect a senior Pomeranian to get between 13 and 14 hours of sleep per day, which is only slightly more than adult Pomeranians. At this stage in a Pomeranian’s life, they start to relax a bit more and wind down earlier in the evening, so don’t be worried if you notice this.

Is Your Pomeranian Sleeping Too Much?

If you think your Pomeranian is sleeping too much, then it’s important to know what you can do to possibly bring their healthy sleeping patterns back in line.

One main reason for a Pomeranian to sleep more is because they’re getting more exercise than normal. Maybe you’ve been taking them on more walks per week than normal or they have more playdates with their other doggie friends. Under these circumstances, you have nothing to worry about because they’re simply regenerating their bodies and brains.

Now I don’t know about you, but whenever I get bored, it’s very tempting to just put on the TV and take a nap. Well, Pomeranians aren’t much different in this respect. If your Pomeranian is bored, they’ll likely just fill in their free time with sleep. One way to avoid this from happening is to get them some fun toys to play with. Also, if you have a backyard but no doggie door, I’d consider installing one so your Pomeranian can go out and chase squirrels and bark at birds. But if you really want them not to be bored any longer, get them a brother or sister!

It’s also possible that your Pomeranian has hypoglycemia, which is when they have low blood pressure. Believe it or not, this is a rather common health issue for small breed dogs and it’s possible your Pomeranian has it if they’re sleeping excessively. Thankfully, this can be easily solved by taking a short trip to your local veterinarian.

Pomeranians also sleep in excess when they’re feeling sick, either due to a bug going around or some sort of allergy. When it comes to Pomeranians, they can be fairly susceptible to food allergies, so it’s important that you learn what your Pomeranian is allergic to and to purchase healthy, high-quality dog food. This is another good reason to visit your local veterinarian.

Is Your Pomeranian Sleeping Too Little?

Now sometimes your Pomeranian won’t be sleeping as much as they normally do, and I’d say that’s something to be concerned about. Again, Pomeranians need their sleep so they can recharge and have the energy needed for a Pomeranian life.

If you think your Pomeranian isn’t sleeping enough, consider buying them a more comfortable bed. Just like if you were to buy yourself a new bed and the positive effects it would have on your sleep and overall health, the same goes for dog beds. Each of my Pomeranians has a dog bed all to themselves and they love sleeping on them (apart from when they’re on my lap). I bought the PetFushion Memory Foam Waterproof Dog Bed (link to read reviews on Amazon) for each of my Pomeranians and they love it!

As we all know, dogs have a very keen sense of hearing and if there are a lot of noises occurring where you live, whether outside or inside, your Pomeranian could be sleeping too little. It could be anything from little outside creatures running around, strong wind, heavy rain, beeping sounds from inside, or anything else that could disrupt your Pomeranian’s sleep through sound.

We all want to make sure we get an adequate amount of sleep and for it to be quality sleep. For people, this means between seven and eight hours of sleep with generally two to three hours of deep sleep. With Pomeranians, they also need to get enough quality sleep and ensuring that can be rather simple.

Have you ever drank a cup of water right before bed and woke up a few hours later to use the bathroom? Well, this happens to Pomeranians too, and the best way to avoid this is by taking them for a potty break 20 to 30 minutes before they hit the sack. To make sure our Pomeranians fall asleep and stay asleep, this is a simple but effective way of going about it.

One of my favorite ways to ensure my Pomeranians get enough sleep is to make sure they get their daily walk. This is not only good for their overall health but ensures they’re using their daily energy so they can later have a good night sleep. If you’re not able to walk them, play with them at home for a little bit.

Now, this might sound strange, but I’ve seen other Pomeranian owners use a heating pad underneath their Pomeranians’ beds to make sure they fall asleep fast and for a healthy amount of time. Check out the Riogoo Pet Heating Pad (link to read reviews on Amazon) if you’re interested.

Even though my Pomeranians get a good amount of sleep per day based on their age group, I plan on giving this a try soon. Maybe I’ll get one for myself!

Where should my Pomeranian sleep? Your Pomeranian should sleep in a quiet area with a small amount of light. Ideally, they’re close to their dog bowls for food and water and are within short walking distance to the doggie door so they can go to the bathroom.