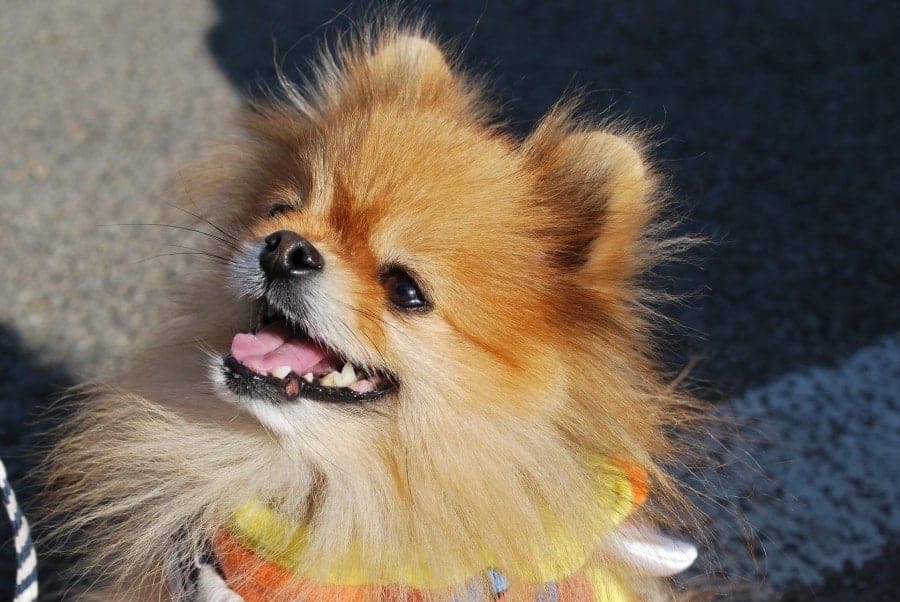 Often times I see my cuddly little guys playing and having a ball (which doesn’t always last long), followed by a bought of heavy breathing. They have their fun, but it sometimes felt like a bit strenuous for their lungs, which is when I started looking into common Pomeranian breathing problems.

One of the most common Pomeranian breathing problems is when they have a tracheal collapse. Essentially this is a common Pomeranian health problem that’s mainly genetic. It happens when the walls around their windpipes start to deteriorate and fall apart, causing their airway to restrict. Thankfully this isn’t painful for Pomeranians, only uncomfortable.

Another common Pomeranian breathing problem is when they have dyspnoea, which is simply when they’re having difficulty breathing. There’s also tachypnea, which is just a technical term for rapid breathing.

First off, don’t panic! Your Pomeranian is likely fine and there’s nothing to worry about. Smaller dog breeds (even toy breeds) often times don’t have the same breathing capabilities as a larger dog (think German Shepards), so it’s only natural that they breathe heavily from time to time.

There are several reasons why your Pomeranian could be breathing a tad bit too heavy. It’s not always obvious that it’s not from over exercise, so it’s important to notice the signs for early detection. We all know how excited they can get!

If your Pomeranian’s or small breeds breathing very fast for some time, kind of like after you hold your breath and then start breathing again but continuously like that, then they may have an issue. They may also start flaring their nose, which is a very common sign that they’re not breathing in enough air. It’s also possible that they start producing a kind of goose-honking noise or coughing too much, which is a common sign of a tracheal collapse.

Another clear sign that your Pomeranian could have a breathing problem is if they get tired easily. It’s not easy for them to run and stay active as much as other dogs, but they should be able to keep up for a good amount of play. If you start noticing them getting overly tired too quickly, this could be a sign of a Pomeranian breathing problem.

Most signs of Pomeranian breathing problems lead to common issues that can be resolved by simply resting, eating right, regular exercise, and love! However, some signs may lead to the discovery that your Pomeranian has a collapsed trachea, which means it should be addressed more seriously.

We all want our Pomeranians to feel great and having a breathing problem definitely doesn’t help that. We need to address some of these issues that come up so they can start living their lives to the fullest!

Like so many things in life, many problems can be solved by regular exercise, eating right, and smiling. For Pomeranians, this is definitely the case. While it’s important not to over-exercise so as to avoid causing injuries, a little walk here and there will do wonders along with eating right. Also, eating natural, healthy dog food helps your Pomeranian avoid common food allergies which can lead to Pomeranian breathing problems.

My suggestion to you as a Pomeranian owner when you see your Pomeranian breathing irregularly is to set up an appointment with your vet and find out if the symptoms are due to a collapsed trachea. About 30% of all the Pomeranians I’ve owned in my life have had this common Pomeranian health problem, so it’s worth a short trip to the vet.

If your Pomeranian has a collapsed trachea and you aren’t able to get them surgery, consider using a no-pull dog harness whenever you go on a walk. This will relieve the pressure on their windpipe and allow them to breathe easier. Another fantastic option is to get them cough medicine or throat soothers specifically aimed at relieving dogs with a collapsed trachea.

The good thing is there are ways to ease your Pomeranian’s discomfort if they do have a collapsed trachea. First, it’s best not to get them overly excited (as hard as that may be!), because they’ll just start coughing and breathing rapidly. Second, I highly recommend getting a proper dog harness for your Pomeranian. This really should apply to all dogs, but Pomeranians in particular because of their common Pomeranian breathing problems. A proper dog harness will keep their airway as unrestricted as possible when you’re walking your Pomeranian.

Once you’ve solved your Pomeranian breathing problems, they’ll be able to enjoy life as it’s supposed to be enjoyed: to the fullest and happiest! It’s important to keep an eye on your Pomeranian as it can sometimes be difficult to tell whether they have a common Pomeranian health problem or it’s less serious. One thing’s for sure, after helping your Pomeranian breathe easier and more naturally, you’ll be their hero for life and they’re going to be so happy.

As I mentioned before, it’s important to make sure your Pomeranian has a good diet, exercises regularly, and has time to play. This should be a priority for all Pomeranian owners because the more we’re able to improve our Pomeranians’ lives, the more likely they are to live long and happy lives.

Making sure your Pomeranian eats healthy, high-quality dog food can really solve a lot of potential health issues. You might be surprised by how many Pomeranian food allergies there are, which can lead to all sorts of Pomeranian health issues. Luckily, this is an easy problem to solve because it only requires buying the right food!

Another great way to keep your Pomeranian healthy and happy is to give them regular walks. Sometimes they get tired and want to be carried. But it’s important for them (and ourselves) to get a little walking action from time to time. As I mentioned before, investing in a proper no-pull dog harness is a great way to reduce your Poms or small breed dogs potential discomfort, especially if they have Pomeranian breathing problems.

Finally, they should have as much opportunity to have fun! They love to bark, spin, and socialize, so we should let them be themselves and show off their character. Sometimes the barking can be too much, but from time to time they should just let it out. Having a Pomeranian that’s happy not only improves their overall health, but everyone they interact with, especially your family.

It can be scary watching your Pomeranian go through a coughing spell or having trouble breathing. If you notice anything like this, you should immediately contact your vet.

While there are natural remedies to address coughs and other issues, if the issue isn’t addressed early and gets out of hand, surgery may be needed. And nobody wants that.