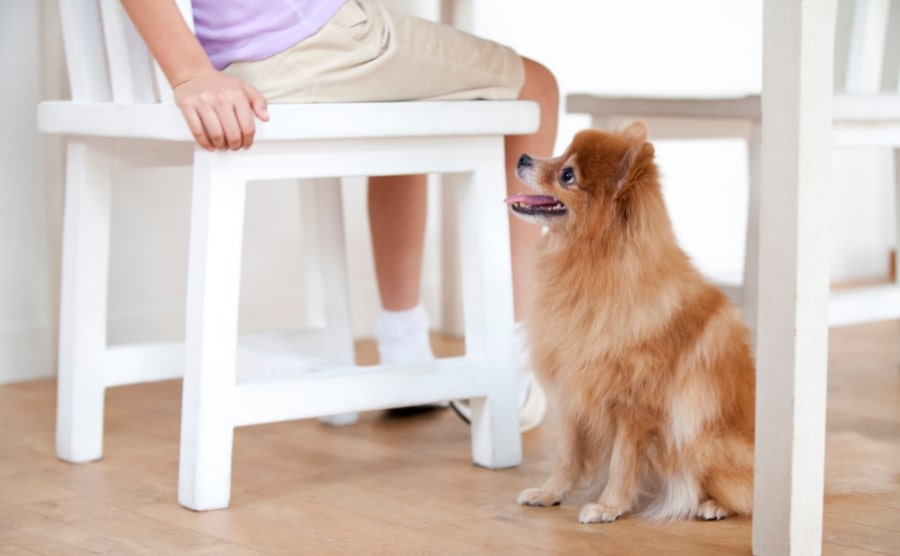 So, how can you train a Pomeranian puppy to sit? Teaching your Pomeranian puppy to respond to “Sit” involves luring them into the position and then rewarding your puppy with treats. That’s called positive reinforcement, and it’s one of the best strategies for training Pomeranians.

To make things easy for you, I’ve prepared a 9 step guide on how to train your Pomeranian puppy to sit. Just keep on reading.

9 Steps on How to Train a Pomeranian Puppy to Sit

1. Pick a Location for Training

You have to know that Pomeranian puppies have an extremely short attention span. So you can’t expect them to focus if something more interesting than training is happening around them.

That’s why you need a place away from the hustle and bustle of the house where you can have your Pom’s undivided attention. You can also carry the training sessions outside as long as it’s somewhere quiet.

2. Choose the Right Time for Training

As a rule, training should be part of your Pomeranian puppy’s daily routine. That’s why you should find a time that works for both of you. Let me explain.

Moreover, it’s no use trying to teach your Pomeranian puppy how to sit on command when they’re excited about something or under the weather.

Usually, specialists recommend that you pick a time when your Pomeranian is bored so that they can enjoy the training. It will also be helpful if your puppy is slightly hungry so that they’re extra motivated to get the food reward.

Speaking about food reward, you have to get treats that your Pomeranian puppy loves so much that they go crazy for them.

It should be something special that you’re going to use only for raining. If you give these treats all the time, your Pomeranian won’t be motivated to work hard to get them.

So, you might have to experiment a little until you find the right bribe for your Pomeranian puppy. You can try pumpkin cookies, fresh carrots/apples, bananas, or commercial dog treats for small breeds.

However, you should be careful not to give too many treats to your Pomeranian puppy. Remember that Poms are small, and it’s easy to overfeed them. Cut any treats into tiny pieces and watch out your Pomeranian’s puppy weight.

In addition to this, whenever you’re giving your Pomeranian puppy human food, check to make sure it’s safe and non-toxic for dogs. You should avoid chocolate at all costs.

You’re almost ready to start training your Pomeranian puppy to sit. All you need to do is to pick your command words. Usually, “Sit” works excellently, but you might also use “Good Sit” to reward and reinforce the command.

You’ll also need a release command – a word that shows your Pomeranian puppy that they’re free to move. Otherwise, your Pomeranian will stand as soon as they decide that’s okay. That’s not what you want because you lose control over your puppy.

Besides, having a release will help you when you move to more complicated commands such as “Lay Down.”

Most trainers use “Okay” combined with a hand single to show their Pomeranians that they don’t have to sit anymore.

Whatever words you pick up you should stick up with them. Changing commands in the middle of the training will confuse your Pomeranian puppy and make your job harder.

5. Lure Your Pomeranian Puppy into Sitting

If you’ve made your preparations well, you’re ready to learn how to train your Pomeranian puppy to sit. Here is how the magic happens:

Repeat this exercise several times in a row and then give your release word. You might use a hand motion to stimulate your Pomeranian to move. When they do, offer them reward and praise.

Your Pomeranian might not sit when you move the treat over their head. In this case, move the reward towards your Pom’s tail until your dog sits.

If you don’t have any success with luring, you might try to capture the behavior. Praise and reward your Pomeranian puppy when they’re about to sit on their own accord.

In the beginning, you should reward your Pomeranian the moment they obey. That’s because waiting a few seconds will confuse your puppy and make it hard for them to build a connection between the action and the reward.

So, make sure that you don’t have to rummage through your pockets for treats.

7. End on a Positive

Pomeranian puppies tire easily, so you shouldn’t plan long training sessions. Usually, 5-10 minutes twice a day are enough. What’s essential is that you end the training while your Pomeranian puppy is still having fun. In this way, your Pom will be looking forward to your next lesson and will gain confidence.

Moreover, don’t correct your Pomeranian more than three times in a role because you’re going to demotivate your puppy. While you should reward your puppy only when they’re sitting correctly on the floor, you should encourage your Pom with enthusiastic praise to keep them in the mood for learning.

Your Pomeranian will never learn how to sit if your lessons are every few days or a couple of times in the month. You should practice every day and use the command throughout the day.

As your Pomeranian puppy starts responding to the command, you’ll have to phase out the treats slowly. At first, you’ll be rewarding your Pom every other time they obey and then every fifth-sixth time. Your goal is to give food as a reward occasionally to strengthen your Pom’s response.

However, it’s still important to praise your Pomeranian puppy and make them feel they’ve done an excellent job. For some dogs, your attention and praise are as good a reward as food.

Eventually, you’ll make training more challenging by adding distraction and distance to test your Pomeranian puppy’s response. However, your Pomeranian should have a good grasp of the command beforehand.

However, try to keep your cool. Shouting will make your Pomeranian puppy afraid of you and destroy any trust you’ve earned so far.

So, whenever you feel that you’re getting angry, wrap things up as quickly as possible and take a deep breath.

How to train your Pomeranian puppy to sit isn’t that difficult, as I’ve already shown you. Keep in mind that some puppies might take about two weeks to learn the command, but others are slow learners. So, you have to be patient above everything else.