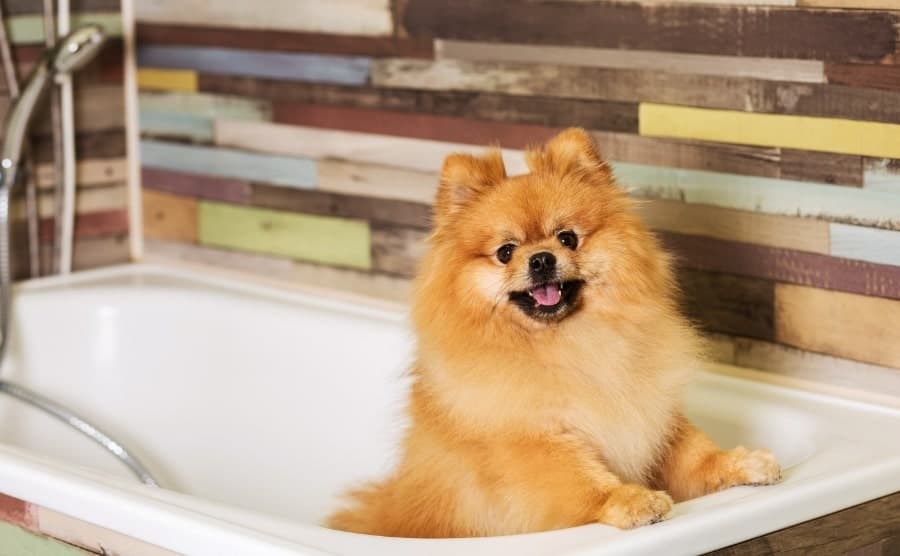 So, how can you stop Pomeranian reverse sneezing? Usually, reverse sneezing doesn’t last more than a minute, so you don’t have to do anything to stop it. However, you can use a couple of techniques to interpret the repetitive inhalation of air if your Pomeranian seems distressed.

So, let’s talk in detail about how to stop Pomeranian reverse sneezing.

10 Tips on How to Stop Pomeranian Reverse Sneezing

1. Learn What Reverse Sneezing Is

If you want to know how to stop Pomeranian reverse sneezing, you have to understand why it happens.

Reverse sneezing is a respiratory event during which your Pomeranian inhales through the nose suddenly, rapidly, and repeatedly.

Usually, they do it standing with an extended neck and pulled back lips. After each inhalation, you can hear a distinctive “snorting” sound and gagging.

Sneezing and reverse sneezing have the same goal – to remove irritants from the upper respiratory tract. However, sneezing occurs when irritants enter the nose, while reverse sneezing is an irritation of the nasopharynx. That’s the area behind the nasal cavities.

Sometimes, Pomeranians also reverse sneeze when they’re overly excited or when they pull their leases too much. In these cases, you should calm your Pom whenever you see that they’re getting too enthusiastic.

Drinking/eating too fast, nose mites, post-nasal drip are other reasons for reverse sneezing.

It can be alarming if you’ve never seen a dog reverse sneeze because it seems like your Pomeranian is choking on something. However, it’s completely harmless, and your Pomeranian should be back to their normal self after the episode is over. If that doesn’t happen, you should go to the vet.

Another way to stop Pomeranian reverse sneezing is to massage their throat. As I already said, irritations in the breathing passages are a common cause of reverse sneezing. So, massaging the throat can reduce the irritation and shorten the sneezing episode.

However, don’t try a massage if you think that it would make your Pomeranian more anxious. Reverse sneezing is neither harmful nor painful for your Pomeranian. But any panic actions on your side might freak your Pom, and they can bite you out of fear.

3. Blow Air in Your Pomeranian’s Face

What you have to do is get close to your Pomeranian and blow a few puffs of air at their nose.

Remember that you’re not blowing candle or a pig’s house and that you should be as gentle as possible. Don’t allow the panic to overwhelm you. Otherwise, your Pomeranian might run away the next time you try to help them.

Pinch your Pom’s nose close for one second using your thumb and forefinger. Don’t squeeze too much, or you might accidentally damage your Pom’s nose. Remember that Pomeranians are fragile dogs, despite their fierce personality.

Moreover, don’t hold your Pom’s nose for more than one second. Otherwise, your Pomeranian might panic when they can’t breathe and try to defend themselves. While Pomeranians can’t do much damage, you’ll lose their trust.

If you trust your Pomeranian that they’re not going to bite you, you can try one other thing to stop reverse sneezing. What I’m talking about is pressing your Pom’s tongue down. That should make your Pomeranian swallow and clear the irritant from their throat.

Usually, when dogs are reverse sneezing, their mouths are partially opened. So, it won’t be hard to stick a finger in your Pom’s mouth and press down the tongue gently.

However, don’t try this method if your Pomeranians seems stressed or agitated. Otherwise, they can bite your fingers.

6. Take Your Pomeranian Outside

As I already mentioned, irritants such as dust and mold can cause reverse sneezing. So, taking your Pomeranian outside where there are no allergens might stop the episode.

Keep in mind that most Pomeranians won’t move while they’re reverse sneezing. Fortunately, Poms are tiny so that you won’t have problems carrying them outside. Just remember to pick your Pom calmly and speak to them soothingly.

7. Offer Your Pomeranian a Treat or Water

You can also stop Pomeranian reverse sneezing by offering your Pom a treat or give them some water. The act of eating and drinking will clear the back of their throat and end the episode.

However, don’t force your Pomeranian to eat or drink. If your Pomeranian is too distressed or distracted, they might accidentally choke on what you’re offering. That’s the last thing you want.

Reverse sneezing episodes last for about less than a minute, usually about 10-20 seconds. They will pass without your interference, and in most cases, it’s better to let it run its course.

If you’ve never seen a reverse sneeze before, you might want to search for videos online so that you know what to expect. You can also record whenever your Pomeranian is reverse sneezing and show it to your vet.

You can also have your Pomeranian tested for allergies so that you can know what triggers to avoid.

As I already explained, reverse sneezing is normal for Pomeranians. However, if your Pomeranian reverse sneezes every day, you might want to talk to your vet about possible treatments.

Depending on the cause, your Pomeranian might need an antihistamine to reduce the allergic reaction, anti-inflammatory drugs for any inflammation, and decongestants to clear the nasal passages.

Your vet also should rule other problems with the throat, such as a collapsed trachea (common in Pomeranians), nasal tumors, and nasal mites.

Now that you know how to stop Pomeranian reverse sneezing, you can act next time your Pomeranian has an episode. However, you should speak with your vet if your Pom has a persistent cough or other unusual symptoms to rule out a medical condition.

This website uses cookies to improve your experience while you navigate through the website. Out of these, the cookies that are categorized as necessary are stored on your browser as they are essential for the working of basic functionalities of the website. We also use third-party cookies that help us analyze and understand how you use this website. These cookies will be stored in your browser only with your consent. You also have the option to opt-out of these cookies. But opting out of some of these cookies may affect your browsing experience.
Necessary Always Enabled

Any cookies that may not be particularly necessary for the website to function and is used specifically to collect user personal data via analytics, ads, other embedded contents are termed as non-necessary cookies. It is mandatory to procure user consent prior to running these cookies on your website.