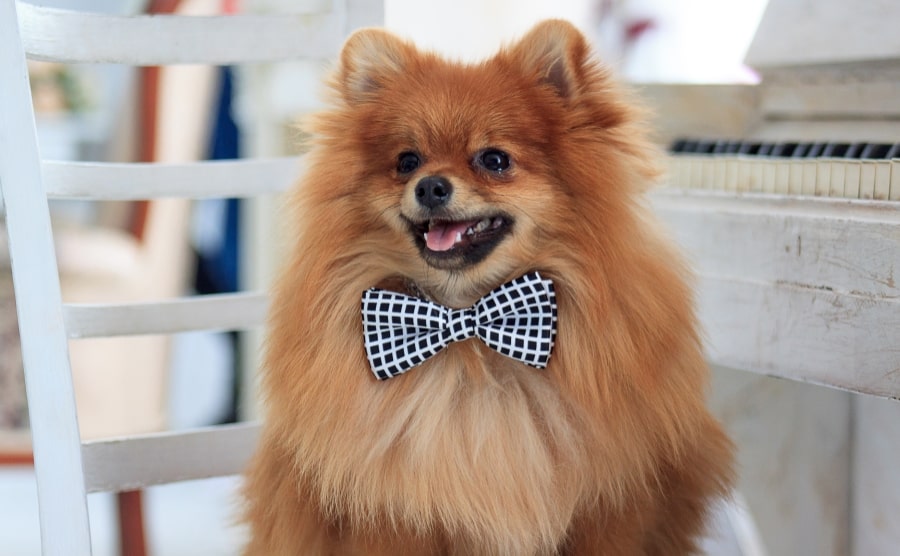 Are you wondering if your Pomeranian is old enough to be neutered? You might if your Pom has been marking all around the house and acting aggressively.

So, what’s the best age to neuter a Pomeranian? The best age for neutering a Pomeranian is between the age of four to nine months old, according to most specialists. However, Pomeranian puppies can be neutered as young as 8 weeks old as long as they weigh at least 2 pounds.

So, what are the pros and cons of neutering your Pomeranian, and what are the risks of early neutering? Keep on reading to find out.

When Is It Too Early to Neuter Your Pomeranian?

Early neutering has been a standard procedure for years to control overpopulation and reduce the number of euthanized healthy animals.

Neutering before your Pom reaches puberty prevents unwanted behaviors such as marking, male aggression, mounting, and humping. Since Poms can mate as young as 7 months old, it also ensures your Pom won’t father any puppies.

In addition to this, early neutering has a low risk of complications, and male Poms recover quickly from the anesthetics.

However, recent findings point out that early neutering before the onset of puberty can also have a negative effect on your Pomeranian’s health. That’s because the reproductive organs produce sex hormones, such as testosterone.

These sex hormones are responsible for the masculine changes in your Pomeranian once he reaches sexual maturity. They’re also responsible for sexually driven behavior like humping, marking, and aggression.

Besides their role in reproducing, these hormones are necessary for the proper development of your Pomeranian’s organism.

For example, testosterone regulates growth and has a role in closing the bone plates. While neutering doesn’t remove all testosterone from your Pom’s body, the levels are significantly lower.

Once owners feared that early neutering could stunt a Pom’s growth. However, the opposite turned out to be the truth. Due to the loss of testosterone, the growth plates close later than usual in early neutered Pomeranians.

So, Pomeranians who are neutered before puberty might have longer legs and grow slightly taller in height than those neutered after sexual maturity.

The problem is that this additional growth can affect the bones and joints, leading to hip dysplasia, luxating patella, and cranial cruciate rupture. That was observed in a study done on Golden Retrievers.

Furthermore, neutering your Pomeranian before puberty might affect the whole endocrine system because it will have to compensate for the missing hormones. As such, neutered Pomeranians have a higher chance of thyroid problems than intact ones.

As you can see, there is no easy answer to the question of what the best age to neuter your Pomeranian is. You should talk with your vet and discuss at length whether your Pomeranian should be neutered before puberty or after, taking into account the overall health of your Pom.

Why Should You Neuter Your Pomeranian?

Now that you know how hard it is to pick the best age to neuter your Pomeranian, you might be wondering what the advantages of neutering a Pomeranian are.

Well, here are five reasons why you should consider neutering your Pomeranian if you’re not going to breed him.

Contrary to popular belief, male Pomeranians don’t have a heat cycle as female ones. When your male Pom reaches sexual maturity, he’s ready for action all year round.

So whenever a female dog goes into heat in a 3-mile radius, your Pomeranian is going to react to the pheromones produced by female dogs. You’re not going to like it when your Pom barks, howls, and whines all day long.

Once your Pomeranian smells a female, the sex hormones are going to kick in. Your Pom will do everything possible to leave the house and find the female.

Can you imagine your small Pomeranian roaming the streets of your neighborhood and what could happen to him?

In addition to this, females attract several males. These male dogs will fight to the death for the right to mount the female, so your Pomeranian might get hurt.

As I mentioned, neutering reduces your Pomeranian’s testosterone levels. So your Pom will be less territorial and less aggressive around other dogs. It won’t make your Pom submissive, though.

In addition to this, neutering ensures that your Pom won’t be marking your whole house with urine whenever a female goes into heat.

Neutering your Pomeranian can help remove the risk of testicular cancer. This type of cancer is common in older pets and requires surgical intervention to remove the tumor.

Neutering also lowers the risk of an enlarged prostate, a condition 80% of intact male dogs develop after their fifth year.

Since neutering removes the sex hormones, your Pomeranian is less likely to hump or mount other dogs, the cat, or your legs.

What Are the Disadvantages of Neutering?

While neutering your Pomeranian has its advantages, you should know about the disadvantages as well to be fully informed.

1. Neutering Increases the Risk of Hypothyroidism

I already mentioned that the absence of sex hormones affects the endocrine system. As a result, some neutered Pomeranian might develop hypothyroidism and require daily medication to keep his thyroid levels at check.

2. Neutering Can Increase the Risk of Certain Cancers

Neutering protects your Pomeranian from testicular cancer. However, it also slightly increases your Pom’s chances of developing hemangiosarcoma. It’s a rapidly growing cancer with few to none symptoms until the tumor has spread.

Usually, neutering reduces marking and aggression. However, when your Pomeranian has already learned to mark his territory, he might continue to do it even after the procedure. The same goes for humping and mounting.

As for aggression, neutering reduces it only when surging hormones are the cause. Neutering won’t solve aggression caused by fear.

While neutering is a standard procedure, it’s still a surgical operation and has its risks. Pomeranians are small dogs, and they might not react well to the anesthetics.

In addition to this, post-surgery complications are also something you have to keep in mind. For your peace of mind, serious complications during neutering are rare.

Will My Pomeranian Change After Neutering?

Besides worrying about the best age to neuter their Pomeranian, a lot of owners fear that their male Pom will change drastically or that he will get fat. Let me assure you on both topics.

Your male Pomeranian will change after you neuter him, that’s true. But most of the changes are good ones. I’m talking about less spraying in the house, fewer fights for dominance, and less territory aggression. So you’ll have a better behaved Pomeranian around the house.

Don’t think that your Pomeranian will feel less masculine or become submissive after the procedure. A dominant Pom will remain dominant because neutering doesn’t change your Pom’s core temperament and character.

In addition to this, you shouldn’t think that your male Pomeranian will blame you or mourn his ability to father children. These are human feelings that you shouldn’t impose on your Pom.

As for weight gain, neutering slows your Pom’s metabolism. That means your Pomeranian doesn’t need as many calories as before, but it doesn’t mean that your Pom will gain weight.

In most cases, Pomeranians get fat because owners continue to feed them the same high-calorie food as before the neutering.

But switching to high-quality dog food for sterilized Pomeranians or reducing your Pom’s daily food intake will help you keep his weight in check. The same goes for daily exercise.

Picking the best age to neuter a Pomeranian is a difficult decision, and you should take it after consulting with your vet or asking for a second opinion. While many vets endorse neutering before puberty, it’s not the best option for all Pomeranians.