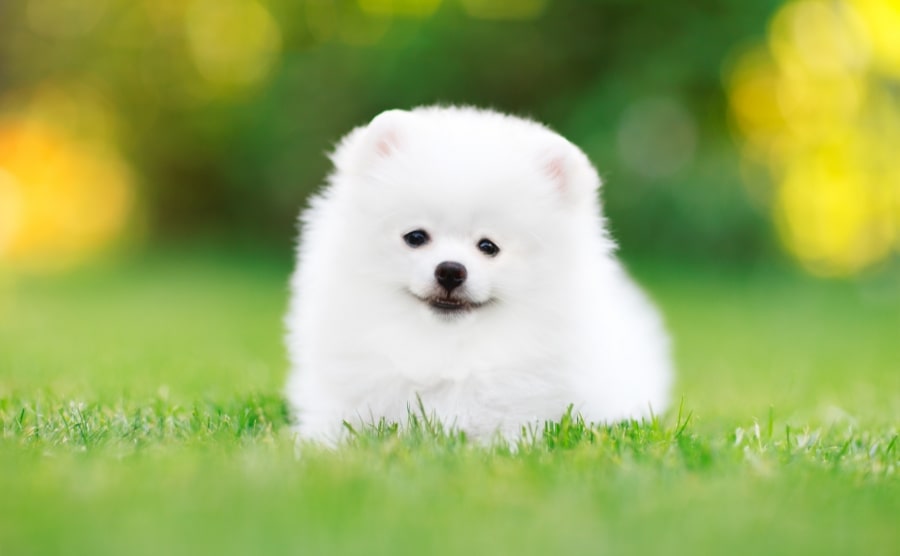 Pomeranian puppies are so tiny when they’re born that you’re afraid to touch them. However, these small balls grow up so quickly that they’re ready to leave their mother before you know it. But you have one important job before that big event, and that’s weaning the puppies from their mother.

So, when should Pomeranian puppies be weaned? In general, Pomeranian puppies are ready to start the transition to solid foods at 4 weeks of age and need around 3 weeks to be complete it. However, you might have to delay the weaning process for underweight or sick puppies.

So, how do you wean puppies, and what’s the right age for a Pomeranian puppy to leave their mother? Keep on reading to find out.

How to Wean Pomeranian Puppies in 5 Steps

For the first few weeks of their lives, your Pomeranian puppy is completely dependant on their mother. That’s because puppies are born deaf, blind, and they can’t regulate their temperature very well.

However, once your Pomeranian puppy is around 4 weeks old, their puppy teeth are going to start emerging. As a result, the mother will allow the puppies to nurse less and less. That’s when you’ll have to step in and help your Pomeranian puppies get used to eating solid food.

When it comes to weaning Pomeranian puppies, you have to be patient and start slowly. You can’t expect your puppy to go from nursing to eating solids in a couple of days.

The transition from liquid to solid food should go well, or your Pomeranian puppy might have future stomach problems. That’s why you’ll need 3-4 weeks to wean your puppy completely.

Moreover, you shouldn’t start the weaning process too early or separate the puppies for their mothers before they’re ready. That’s because your Pomeranian puppies are getting more than milk from their mother. When puppies nurse, they get a lot of nutrients that they need for their proper development as well as for protection from certain diseases.

When your Pomeranian puppies are about 4 weeks old, you can start the weaning process. Don’t pour some kibble in a bowl and expect your puppy to get a bite from it.

Instead, you have to mix some of the mother’s dry food with a canine milk replacer. Then you blend the two until the mixture has the consistency of thick a soup.

3. Get Your Pomeranian Puppy to Eat

Once you’ve blended the kibble and the milk replacer, pour it into a shallow bowl. Then separate the mother from the puppies. Let the puppies explore the dish, and they’ll eventually poke their noses in it and try some of the food.

If your Pomeranian puppies are reluctant to do so, you can put some on your finger and let them lick it. Or you can use a small spoon to encourage them to eat.

Don’t ever push your Pomeranian puppy’s mouth into the bowl. Your puppy might inhale some of the food and develop pneumonia.

Eventually, you’re going to offer your Pomeranian puppy only dry food, and they should have no problems digesting it.

While most puppies are weaned by the time they’re 7 weeks old, some might need an extra week or two.

Young puppies under three months old should have access to food all the time. However, puppies tend to make quite the mess in the first few weeks because they play with their food a lot.

As such, you should remove the bowl once your Pomeranian puppies have their full and then offer it again in a few hours. Once your puppy behaves around their food, you can leave the bowl.

You also should have water available in a shallow dish so that the puppies can drink from it without drowning.

What’s the Right Age to Separate a Pomeranian Puppy From Their Mother?

The hardest thing about raising a litter of Pomeranian puppies is that you’ll have to give them up eventually. However, you should be careful not to separate the puppies from the mother too soon.

In addition to this, Pomeranian puppies learn how to act like dogs during these vital months. Usually, the mother observes the puppies and “punish” them when they step out of line. She shows them the proper way to act around other dogs and how to show respect.

Bite inhibition is also something puppies learn by interacting with their mother and littermates.

As such, separating the puppies from the mother too early often leads to future behavior problems, such as shyness, defensive aggression, and reactivity to loud noises.

While there’s some debate on the best age to send Pomeranian puppies to their new home, puppies should stay with their mother at least until they’re 8 weeks old.

Some breeders prefer to rehome their Pomeranian puppies at 8 weeks because the little ones adapt better to their new environment.

However, others prefer to keep the puppies until they’re 12 weeks old. That allows breeders to start the socialization process and make the puppies more open to new experiences.

In either case, you shouldn’t separate your Pomeranian puppies from their mother until they’re eating solid food well.

Now that you know when and how you should wean your Pomeranian puppies let’s talk about what you should and shouldn’t do.

Once Pomeranian puppies get curious about food and water, they won’t hesitate to try what’s in their mother’s bowls. However, eating solid food too soon will lead to an upset tummy. Not to mention that young puppies can easily choke even on small kibbles.

Moreover, it’s easy for a puppy to drown in a not-so-deep water dish. Remember that Pomeranian puppies weigh between 1/2 – 1 pounds, and falling into the water bowl can be deadly.

2. Clean the Puppies After Meals

If you’ve ever taken care of small puppies, you know what mess they make when they eat. Most puppies get food all over their face, feet, and coat. That’s why you should wipe them off after each feeding.

3. Allow the Mother Some Me Time

Usually, a mother stays close to her pups for the first few weeks of their lives. However, once you start weaning your Pomeranian puppies, you should let the mother have some quality “me” time.

In this way, the puppies will get comfortable being away from their mother and will get used to being handled by you.

Young puppies can get into a lot of trouble when you leave them unsupervised. Since they’re learning about the world, they can get stuck in places you can’t imagine or get into things they shouldn’t. Puppies also might fall down the stairs or drown in a shallow food dish.

During the weaning process, you should weigh the puppies regularly. They should continue to gain weight and grow. However, runts of the litter might have trouble putting on pounds, and they might need extra feedings or more time nursing from the mother.

If you notice that a puppy is losing weight, you should contact your vet immediately.

1 thought on “When Should Pomeranian Puppies Be Weaned?”