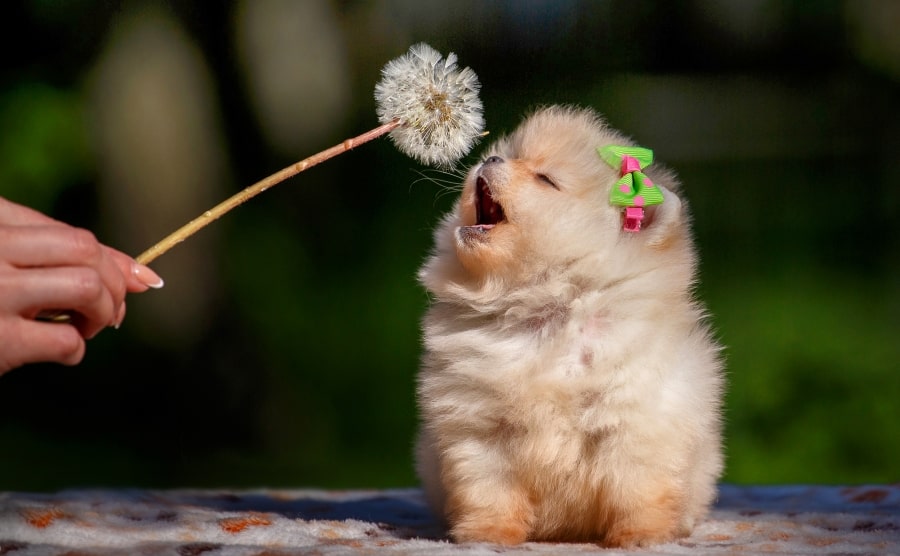 Pomeranians are one of the most popular companion dogs, and it’s not surprising given their sweet temperament and majestic appearance. However, getting your first Pomeranian puppy might be quite a challenge when you don’t know what to look for.

So, what to look for when buying a Pomeranian puppy? The most important thing is to get your Pomeranian puppy from a respectable breeder and receive health clearance for the most common Pomeranian diseases.

To save you a lot of trouble and heartache, I’ve prepared eight tips to help you buy your first Pomeranian.

As I already mentioned, you should always get your Pomeranian puppy from a registered show breeder with a good reputation. Such breeders make sure that the parents don’t have any hereditary disease and strive to improve the Pomeranian breed.

That guarantees you that your puppy will be healthy and that they will match the American Kennel Club’s breeding standard. That’s important if you plan to show your Pom in the ring.

So, do some research on the breeder you’ve selected. Check how many years they’ve been breeding Pomeranians and how many Pomeranian champions they have.

Look for online reviews and ask the Pomeranian community what they think of the breeder. That will give you a clear picture of what to expect.

In addition to this, you should check the breeder’s website. Any professional will have a well-made site with enough information about previous puppy litters and expected ones.

2. Ask to Meet the Parents

Another important tip on what to look for when buying a Pomeranian puppy is to meet the parents. Such a request serves two purposes.

First, you want to see the living conditions in the breeder’s home. Respectable breeders make sure that their Pomeranians live in a clean environment and are well-cared for.

Moreover, meeting the parents will give you a rough idea of what your Pomeranian puppy will look like when they grow up and how big they will be.

You’ll also be able to interact with the mother and puppies and see their temperament. That will allow you to choose a puppy that matches your characters.

It’s not always possible to meet the sire of your Pomeranian puppy. But if the breeder refuses to let you meet the mother, it should raise the red flag.

Usually, people who want to scam you download stock photos from the Internet or breeders’ websites. So, they won’t be able to provide a lot of different pictures of the Pomeranian puppies or their parents.

Still, I urge you to be careful when you’re buying Pomeranian puppies based on pictures only. Ask the seller how big your chosen Pomeranian puppy will be and how much grooming they would require.

Any professional breeder can answer such questions with ease, while fake and unprofessional ones will struggle.

When you’re purchasing a Pomeranian puppy, you have to know how to distinguish a healthy one for a sick one. Otherwise, some unprofessional breeders will try to slip you an ill Pomeranian whose treatment might cost a fortune.

Usually, thin Pomeranian puppies with potbelly appearance have worms. A red and sore bottom, on the other hand, indicates stomach issues and diarrhea.

Puppies with rough or smelly coats also should be avoided as well as those that have eyes or nasal discharge. They’re probably sick.

Remember that healthy Pomeranian puppies will be active and curious about their surroundings. Inactive and lethargic puppies are usually ill or in pain.

When you’re buying a Pomeranian puppy on photos alone, you should check their expressions. Well-cared-for Pomeranian puppies will happily pose for a picture and won’t appear terrified.

Unfortunately, there’s still a risk since unprofessional breeders often dress up their Pomeranian puppies for pictures. So, don’t take the deal if the breeder seems too eager to sell you a puppy.

Another thing that you have to look for when buying a Pomeranian puppy is their temperament. Ideally, you want a Pomeranian that matches your personality.

Usually, specialists recommend that you get the middle-of-the-road Pomeranian puppy, who isn’t aggressive or shy. You want the one that’s eager to meet you and likes to sit in your lap.

Shyness and suspiciousness towards strangers might be hard to outgrow, and they can make socializing your Pomeranian puppy challenging.

As a whole, Pomeranians are a healthy breed. However, they’re prone to some genetic and hereditary conditions. So, to get a healthy Pomeranian puppy, you have to request to see the following health clearances:

Stay away from any seller that refuses to show you these clearances and check the OFA’s website to verify that the documents are legitimate.

Reputable breeders sell Pomeranian puppies only with a contract to ensure that the puppy goes to a good home. So, you should ask to see it before the purchase and get familiar with the terms.

Don’t be tempted to purchase a puppy from a pet store. Usually, pet store owners don’t take the best care of their puppies. As such, you might buy a sick Pomeranian puppy that might not make it.

You should also avoid backyard breeders. Most often, these people are amateurs, and they don’t know what they’re doing. They don’t screen the parents for diseases and don’t breed Pomeranians that fit the breeding standard.

More importantly, some backyard breeders grow their Pomeranian puppies in filthy conditions and don’t take proper care of them.

So, you’ll likely get a puppy filled with fleas and parasites. Such puppies probably won’t be vaccinated and might get sick quickly because of a weakened immune system.

In addition to this, puppies bred in dirty conditions are hard to housetrain. Usually, puppies learn from a young age not to soil their sleeping places. However, when that isn’t possible, the puppy grows comfortable doing their business wherever they see fit.

As you can see, you have a lot to look for when buying a Pomeranian puppy. Don’t make any rash purchases and take your time to get to know the breeder. Any professional will answer all your questions and won’t be in a hurry to get rid of their Pomeranian puppies.