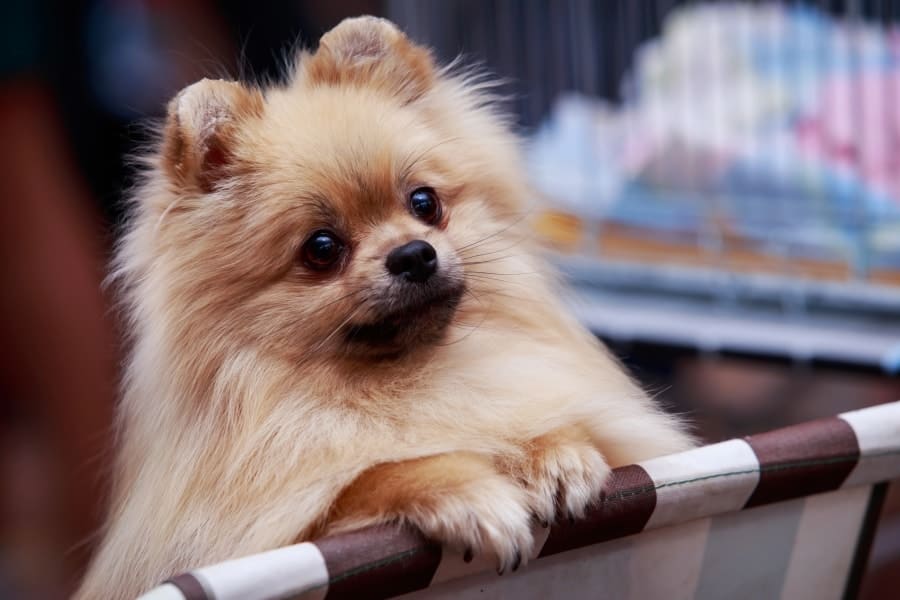 Pomeranians and other dog breeds can be susceptible to some pretty awful heart diseases that are sometimes completely unavoidable. While heartworms in Pomeranians are more common then Pom parents may believe, they can be prevented and treated properly.

So, what are heartworms in Pomeranians? Heartworms, or Dirofilaria immitis, is a parasitic worm that can live in your Pomeranian’s lungs and heart. They’re microscopic larvae that move through blood vessels in the body and are known to be transmitted through mosquito bites.

The name heartworms just sounds scary. Imagine microscopic worms traveling around your bloodstream, slowly infecting parts of your body, including your heart, lungs, liver, and kidneys. That’s no way for a Pomeranian or any other dog to live their lives, which is why it’s so important to be able to pinpoint the symptoms of heartworms in Pomeranians and understand the underlying causes so we can prevent and treat this harmful heart disease.

What Is Heartworm Disease in Pomeranians?

As I just mentioned, heartworm disease in Pomeranians is a parasitic worm that travels throughout your Pomeranians blood and reaches all sort of places, more notably their heart and lungs. Dogs of all ages can be diagnosed with heartworm since the major cause is through mosquito bites.

A normal heartworm lifecycle could look something like this:

Can you imagine something like that living inside your Pomeranian? I sure can’t, but it happens more often than you might think. That’s exactly why it’s so important to be able to see the warning signs when they show up so you can act fast and work with your local veterinarian to squash this bug.

Pomeranians are susceptible to a number of heart diseases that can be very debilitating and sometimes fatal, which should be a legitimate cause for concern for any Pomeranian parent. By having a keen eye on what to look out for when it comes to Pomeranian heartworm symptoms, you’ll be able to keep your Pomeranian safe by acting immediately.

The major Pomeranian heartworm symptoms include:

If you see your Pomeranian experience a mix of the above symptoms, you should go see your local veterinarian right away so you can get the right blood test done. If you suspect these symptoms are related to your Pomeranian potentially having heartworm, your vet will most definitely be able to confirm it.

This stage is essentially unknowable since this the absolute first stage where your Pomeranian is injected with the heartworms. These heartworms are just getting used to their new home and traveling around your Pomeranian’s bloodstream. At this point, the heartworms won’t have had the opportunity to multiply, so their presence won’t be noticeable in terms of symptoms.

When your Pomeranian enters the third stage, the symptoms that’ll be on display will be much more visible resulting in a strong impact on your Pomeranian’s daily life and overall health. Your Pomeranian will cough more frequently, they won’t be able to exercise nearly as much as before, breathing difficulties will arise, fainting spells could occur, and you may see your Pomeranian cough up blood. Your vet will be able to visualize the heartworms circulating through your Pomeranian very easily through the use of X-rays.

At the fourth stage of heartworm disease in Pomeranians, you’ll see all of the worst symptoms show up, including weight loss, high blood pressure, rapid heartbeat, and even congestive heart failure. At this stage, your Pomeranian will likely be very ill bringing on the increased chances of a fatal situation. Even when treated, your Pomeranian could have lifelong debilitations that could easily shorten their lives and reduce their comfort levels irreversibly.

The good part about heartworm disease in Pomeranians is that it’s absolutely preventable and can also be easily treated. As long as you’re able to follow some simple guidelines to prevent heartworm in your Pomeranian, your Pomeranian will have the opportunity to live a long and happy life. On top of that, prevention is way easier and cheaper in the long run.

Another great way to keep heartworms out of your Pomeranian is by putting an insect jacket on them so nothing can even get close to their skin. This might not work out so well for Pomeranians living in hot temperatures, but it can keep your Pomeranian safe from all types of harmful bugs. My Pomeranians use the Insect Shield Premium Tee Insect Repellent (link to read reviews on Amazon) since it keeps the mosquitoes out, it’s made from a very breathable material, and it’s veterinarian approved.

While it’s probably true that the absolute most effective way to keep your Pomeranian safe from ever being infected with heartworm disease is by keeping them inside all the time, that’s no way for a Pomeranian to live. They should get to go outside and experience the world just like any other dog. As long as you’re ready to combat those pesky mosquitoes, your Pomeranian should be in good hands.

Either way, you want to make sure you take your Pomeranian to the vet every 6 months to get their normal checkup. By doing this, you’ll be able to catch heartworm disease in your Pomeranian at an early stage if it ever shows up.

Treating heartworm disease in Pomeranians consists of a series of shots over, what could be, a 60 day period. These shots will pinpoint the location of the heartworms in your Pomeranian and kill them on the spot. The shots are injected in your Pomeranian’s back muscles, which is a safe and effective location for this treatment.

In the unfortunate event that your Pomeranian is diagnosed with late-stage heartworm disease, the only option could be surgery. The reason this may be the case is the heartworms can also be found in the large vein known as the caudal vena cava, which is located between the liver and the heart. Sadly, medication can’t effectively remove heartworms in these locations, resulting in surgery becoming necessary.

In the end, your Pomeranian will most likely be fine as long as you take effective preventive measures and are able to catch heartworm disease in the earliest stages. That means being prepared and making sure your Pomeranian is safe.